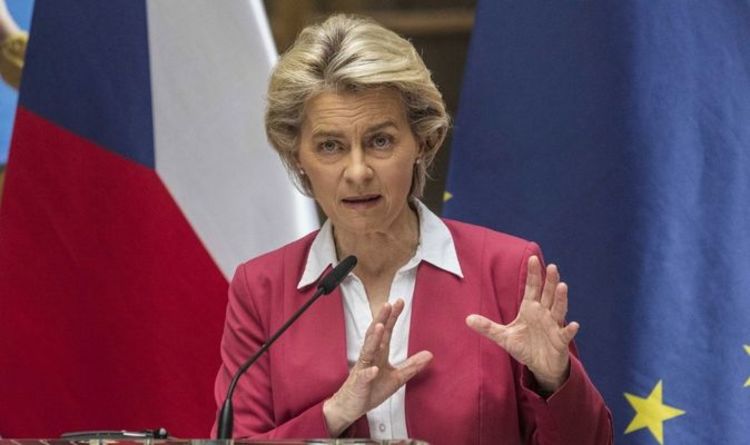 EU policies have been largely ignored in the Bundestag election campaign, as candidates have prioritised domestic issues instead. Could Ursula von der Leyen step into Chancellor Angela Merkel’s shoes to become the most powerful woman in the EU?

Angela Merkel has dominated EU politics during her 15 years as Chancellor of Germany.

But the once called ‘Queen of Europe’ will soon see her reign coming to an end.

Ms Merkel will step down as Chancellor at the next general election, which will be held on September 26 2021.

With Ms Merkel out of the way, the President of the European Commission, Ursula von der Leyen, could become the most powerful woman in the EU.

He said: “[President Ursula von der Leyen] does not give the impression that she wants to wait for German politicians to stop navel-gazing after the election campaign and the government, and return to European issues.”

If the candidates don’t start focusing on EU policy, they could see French policies dominate EU politics if Ms von der Leyen is given her own way, he added.

He explained: “Her ideas, such as the ‘chips act’ at the centre of this year’s State of the EU address are out of the toolbox of French industrial policy.

“The China policy she outlined will also be met with great approval in Paris.”

He argues that her policies are centred around what President Macron thinks.

He said: “The decisive factor for her EU policy is obviously in most cases what French President Emmanuel Macron, to whom she owes her office, thinks.

“That alone should be reason enough for some in Berlin to sound the alarm — and also for the candidates to finally start talking about the ‘state of the EU.”

He wrote in Süddeutsche Zeitung: “There are good reasons why many people, when it comes to the real future of Europe, are more likely to wait to see who wins the September in Germany — and who wins the French presidential election in April 2022.”

“Von der Leyen’s admirers hope she can become the most powerful woman in Europe after the departure of Angela Merkel … but even she will be dependent on the help of the Franco-German axis.”

But some say Ursula von der Leyen’s role in a post-Merkel era isn’t guaranteed to grow.

Jacopo Barigazzi wrote in Politico: “One major question for the post-Merkel era is what it will mean for European Commission President Ursula von der Leyen, a disciple and close Merkel associate.”

Ursula von der Leyen may have considerable power within the EU as the President of the European council, but it has become “increasingly fragmented”.

He wrote: “European Council, the body composed of EU leaders that increasingly calls the shots but has grown increasingly fragmented.”

It may be harder for Ms Von der Leyen to exercise her power in such a fragmented group.