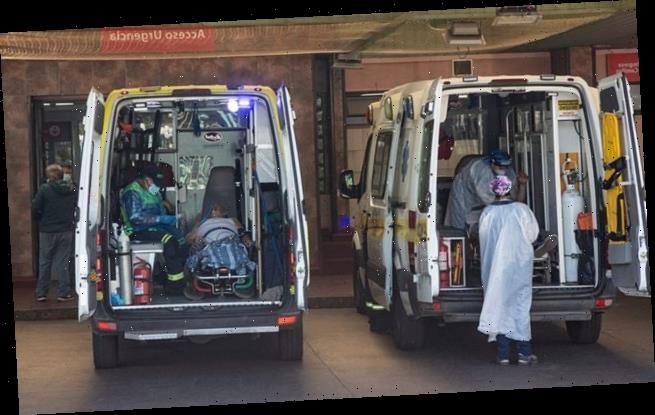 As Chris Witty talks down Britain’s lockdown exit, how vaccinations have led Israel to freedom but failed to stop third wave in Chile where ineffective Chinese jab was used

Israel, the UK and Chile are all world-leaders in terms of the percentage of their respective populations that have been given at least one dose of a Covid-19 vaccine.

Israel’s successful vaccination drive has given over 60 percent of its population at least one jab. In the UK, around 47 percent of people have been given a single dose, while that figure is around 35 percent in Chile.

But while Israel has begun to ease lockdown measures and re-open its economy, Chile has recently implemented new restrictions, and last week recorded 49,542 new Covid-19 cases – the highest weekly levels since the start of the pandemic.

The UK is currently somewhere in the middle of the two – a low infection rate like Israel, but with restrictions in place – with fears about a third wave of coronavirus infections leading to officials taking a cautious approach to relaxing measures.

However, with the UK having given at least one dose to over 47 percent of its population, the Prime Minister has come under fire from MPs in his own Conservative party for the time it is taking to ease restrictions, with some saying the country could be left in a state of never-ending ‘demi-lockdown’ amid fears of a third Covid wave.

Speaking on Monday, England’s chief medical officer Professor Chris Whitty pointed to Chile as a warning that a quick vaccine roll-out does not necessarily guard against future outbreaks of the virus, which has killed over 2.86 million people worldwide.

‘We absolutely need to learn from those countries that are far ahead of us in terms of or alongside us in terms of vaccine rollout,’ he said, speaking during a news conference on Monday from Downing Street.

‘This is the reason we want to do things in a steady way because the assumption that just because you vaccinate lots of people, then the problem goes away, I think Chile is quite a good corrective to that.’ 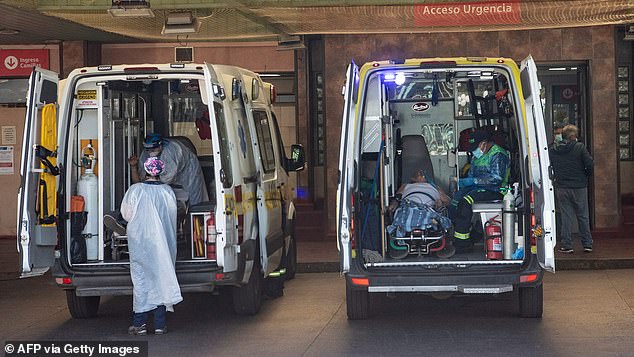 Ambulance personnel wait their turn to be able to admit sick people to the San Jose Hospital following the saturation of the health system due to the high number of Covid-19 infections, in Santiago on April 5, 2021 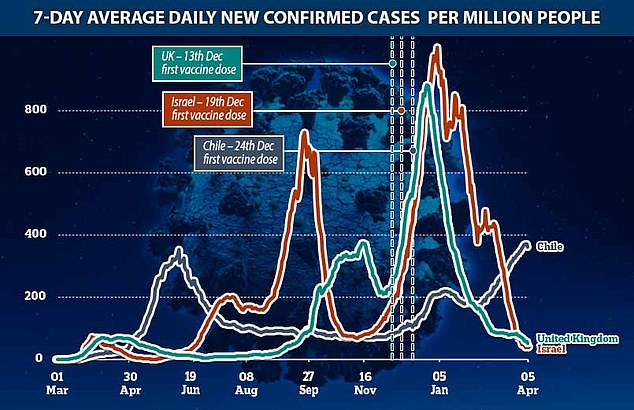 Pictured: A graph comparing the seven day average daily new confirmed cases of coronavirus per million people in Chile, the UK and Israel, and the date each country began vaccinating 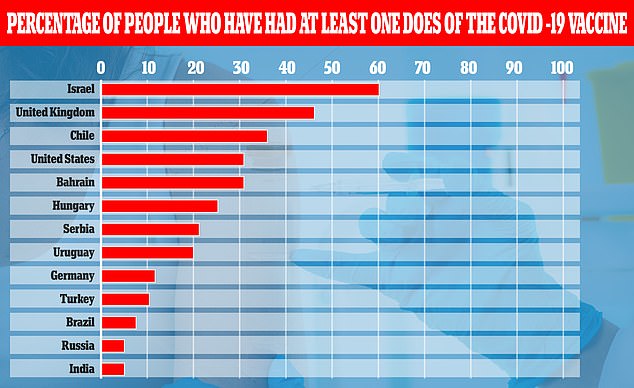 Pictured: A graph showing the progress made by countries in giving at least one dose of Covid-19 vaccines to their populations. Israel’s successful vaccination drive has given over 60 percent of its population at least one jab. In the UK, around 47 percent of people have been given a single dose, while that figure is around 35 percent in Chile

Prof Whitty said that Chile’s experience had contrasted with that of Israel, and it was unclear whether it was due to the timings of rollout, the vaccines used, interactions with coronavirus variants or other factors.

During the same press conference, Prime Minister Boris Johnson confirmed that non-essential shops, gyms, hairdressers and libraries in England will reopen from April 12 while pubs and restaurants will be allowed to serve customers outdoors.

Foreign travel and indoor dining are on track to restart from May 17, with most remaining restrictions lifted by June 21, he said.

But Conservative minister Sir Iain Duncan-Smith warned Britain was on course to be left in a ‘demi-lockdown’ even when the road map is completed. The former Tory leader accused No10’s scientists of deploying ‘Project Fear’ tactics.

And Tory MP Sir John Redwood today said there was a ‘range of possible outturns’ from the three models SPI-M looked at, and that it should not stop ‘anybody going around their normal life or duties in the meantime when the data is so visibly improving’.

Daily coronavirus cases in England have plunged from around 50,000 during the darkest spell of the second wave in January to around 3,500 now, despite fears that reopening schools would cause the outbreak to spiral. Deaths and hospitalisations have fallen even quicker, thanks to the hugely successful vaccination drive. 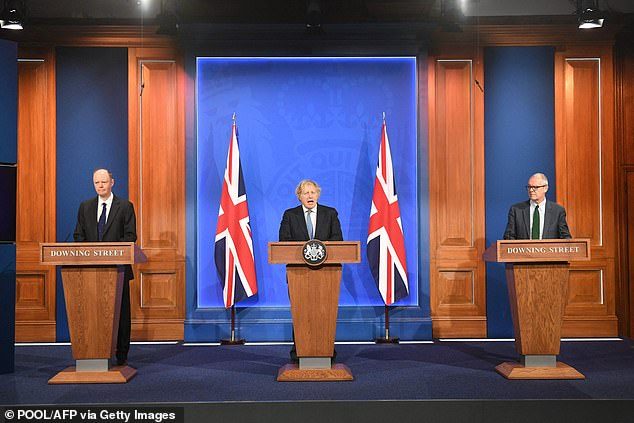 Speaking on Monday, England’s chief medical officer Professor Chris Whitty (left) pointed to Chile as a warning that a quick vaccine roll-out does not necessarily guard against future outbreaks of the virus, which has killed over 2.86 million people worldwide

Meanwhile Israel – that has given at least one dose to over 60 percent of its population, and has fully vaccinated over 50 percent – has eased most coronavirus restrictions, and has seen coronavirus cases and related deaths drop to their lowest levels since the summer of 2020.

Israel’s rapid progress means more than 4.6million people have had two jabs and are eligible for a so-called ‘green pass’ in a scheme being closely watched by other countries, and that could be copied in the UK.

Israel began easing a nationwide lockdown in late February, with most businesses and schools gradually resuming activity with limits on capacity.

Along with the people who are fully vaccinated, another 8.7 per cent of the population are presumed immune after previously recovering from Covid-19.

That makes the majority of the population eligible for the ‘green pass’ certificates that show a person is protected from the virus, and thus gives them access to various leisure venues such as bars and restaurants to those who are inoculated against coronavirus. 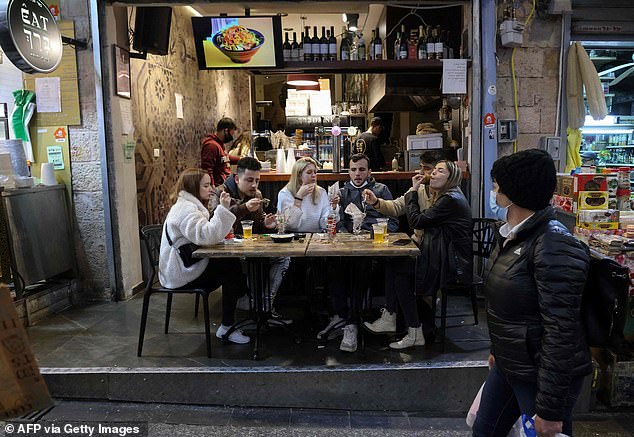 People eat at a restaurant in Jerusalem’s main market after authorities reopened restaurants, bars and cafes to ‘green pass’ holders (proof of protection against Covid), on March 11, 2021 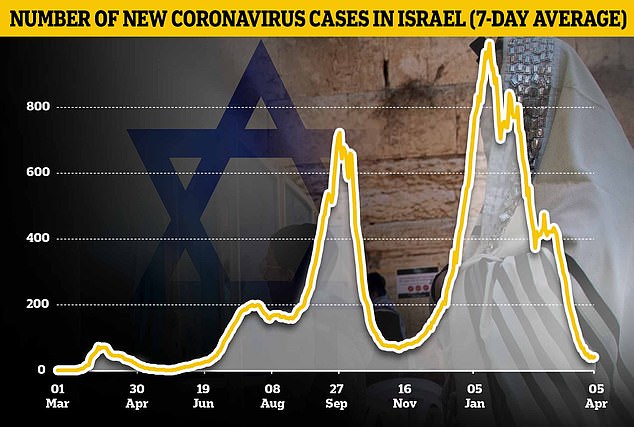 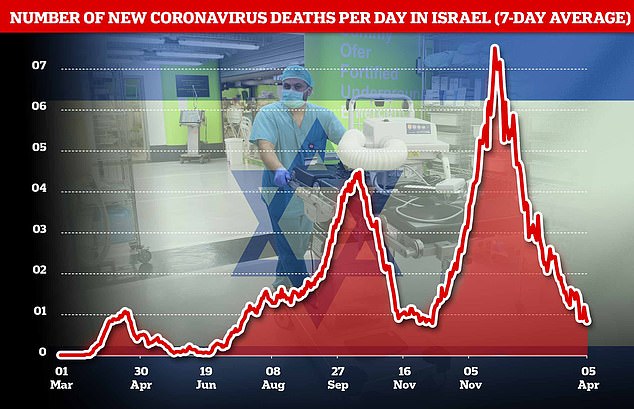 Despite only one a few separating them in the global vaccine race, a number of factors differentiate the situations in Chile, Israel and the UK.

While Israel has so far exclusively used the US Pfizer/BioNTech vaccine, Chile – which has vaccinated over 35 percent of its population with one dose, and over 20 percent with two – has been using a combination of Pfizer and China’s CoronaVac vaccine.

And while data shows that the Pfizer/BioNTech jab is around 95 percent effective at protecting someone from Covid-19 after they have been given two doses, CoronaVac’s effectiveness sits at around 50 percent.

This means that for every 100 people vaccinated with two doses of CoronaVac, 50 remain at risk of infection.

Chile signed an agreement to purchase 20 million doses of China’s CoronaVac vaccine, which was approved for emergency use on January 20, and so far, the bulk of doses administered in the South American nation have been CoronaVac.

While the vaccine will reduce the intensity of symptoms and therefore considerably reduce the risk of hospitalisation for the most serious of cases, vaccinated individuals may still spread the virus.

The European Union and other countries, such as the UK and the US, have not approved CoronaVac as it has not been proven to be sufficiently effective.

The UK, meanwhile, has been using a combination of the Pfizer/BioNTech jab and the Oxford/AstraZeneca vaccine, which has shown to be around 90 percent effective. 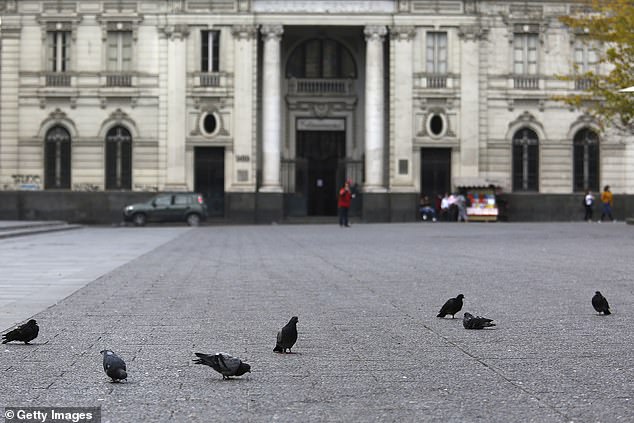 Pictured: A near-deserted Plaza de Armas during quarantine on April 5, 2021 in Santiago, Chile 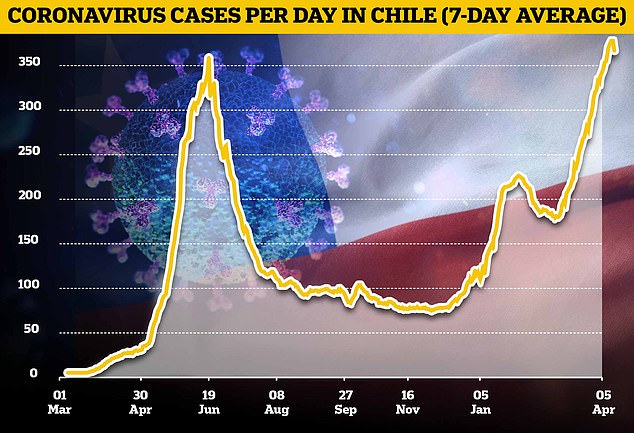 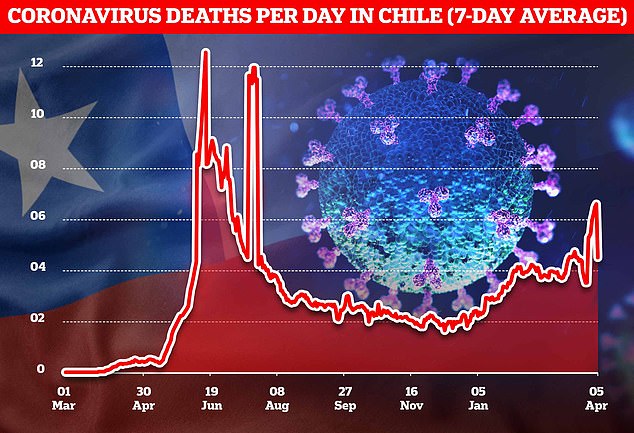 This would suggest that compared to Chile, the number of people effectively vaccinated in Israel, and later in the UK, will be higher than in Chile in the coming months when more people are given their second dose.

The infection rate in Chile and the UK are also very different. The UK is at the end of its second coronavirus wave, and like in Israel, cases and deaths are lower than they have been for months.

Chile on the other hand appears to have reached the peak of a third wave, seeing more new daily coronavirus infections than at any point during the pandemic despite its impressive vaccine rollout efforts.

Doctors in the country have criticised President Sebastián Piñera for lifting restrictions too quickly, with schools reopening and Chileans being allowed to travel domestically since early March, despite rising infections.

Now, the country finds itself in another lockdown, with the borders closed.

In the UK, the January lockdown imposed by Boris Johnson has seen cases fall to their lowest levels since last year, just as the number of single doses is set to pass 50 percent of the population.

Other reason’s for Chile’s rising infections have not been ruled out, with one major concern being that new variants – such as the British variant or the Brazilian P.1 variant – may be evading the vaccine. 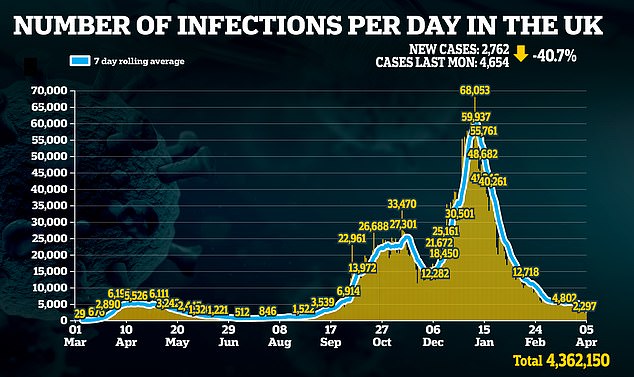 Pictured: A graph showing the number of infections per day in the UK, and the seven-day rolling average 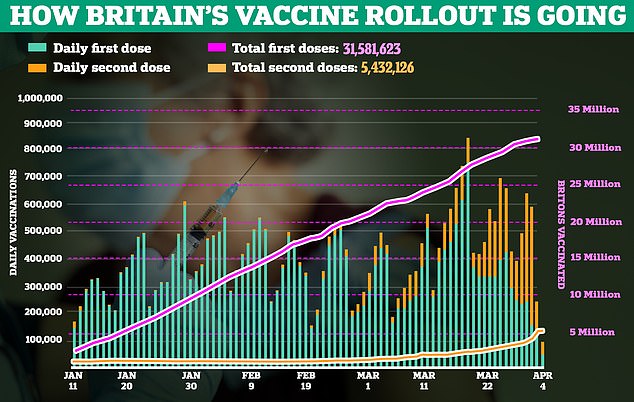 Pictured: A graph showing how Britain’s vaccine roll out is progressing

In March, Chilean scientists pleaded with people to stay indoors.

‘The new variants arriving in Chile are a great worry, and we effectively have one pandemic on top of another now,’ said Dr Ximena Aguilera, an epidemiologist who sits on the government’s Covid-19 advisory committee, according to The Guardian.

‘Unlike before, we are seeing serious cases among younger people too, and there is a sense that some people had become complacent towards the end of the summer with the vaccinations going so well.’

While the emergence of the British variant led to a surge of infections in the UK over winter, this also appears to have been brought under control by the long lockdown, a situation that is more similar to Israel than Chile.

Chile began its vaccination campaign with frontline health workers on 24 December, and the government’s goal is to immunise 15 million people by June 30, achieving coveted ‘herd immunity,’ when a sufficiently large proportion of the population is resistant to a pathogen that it has nowhere to spread.

As of April 6, over 7 million people have received at least one dose of either the Chinese Sinovac or Pfizer-BioNTech vaccine, and 4.04 million have had both jabs.

So far, Chile has recorded 1,032,612 total coronavirus cases, and 23,677 related deaths – a rate that is lower than many other South American countries.

Chileans will be hoping to see new daily infections begin to drop, and their impressive vaccine drive kick in, sooner rather than later.