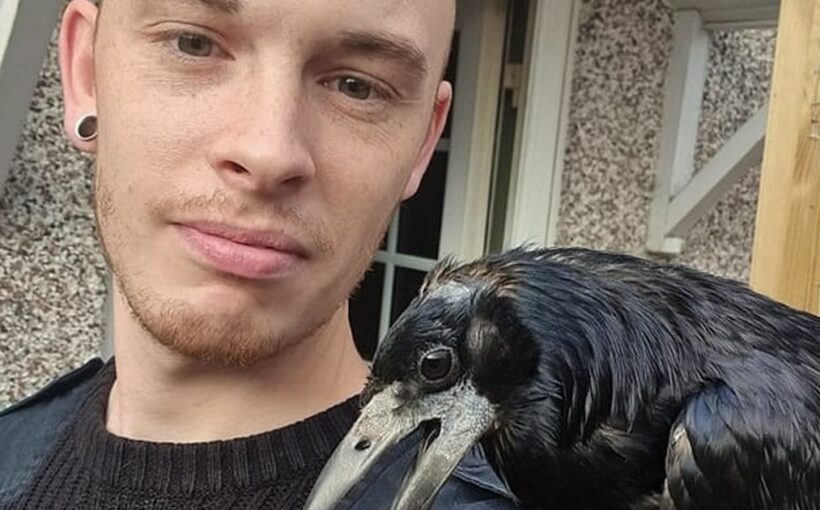 A rescued bird adopted by a North Wales family sparked a frantic search after he disappeared just as his owners got engaged.

Fagin the rook was nursed back to health by Joe Greenwood and went on to become part of his family but his sudden disappearance left Joe, partner Jessica and their four children bereft.

Frantic that the crow would not miss their big day, they offered a £200 reward for his discovery reports North Wales Live.

READ MORE: Man cut in half by forklift hospitalised as he vows 'to fight' new fatal health scare

The cheeky rook vanished after being spooked by a mobility scooter and, being hand-reared, his owners feared he'd struggle to survive in the wild.

Typically, the bird was eventually found four days later feasting on figs in a garden a quarter of a mile from home.

Thanking everyone for their help, Jessica quipped: “We keep saying he went off in a huff because he was jealous his dad proposed to me. None of us have really slept and we’ve been out since the crack of dawn looking (for him).”

Joe, 29, has been described as a real-life Kes character who found solace in birds after a troubled childhood on Anglesey.

He began rescuing injured and abandoned crows, rooks and magpies, and this summer established Helping Hand Corvid Rescue to raise money for his rehabilitation work.

Apart from Fagin, all rescued birds are eventually released back into the wild. Fagin, who helps Joe “teach” young fledglings how and what to eat, rarely strays far from home but was frightened away by a late-night encounter.

“A woman on a mobility scooter often calls to feed our cat even though it’s already been fed,” said Joe, a security guard.

“We thought our car alarm was sounding, so I went outside to see what was happening, followed by Fagin.

At that point, a car with a noisy exhaust sped past and when the woman waved her arms in alarm, Fagin took off.”

Prestatyn’s residents shared his delight, especially those who had joined the search. One woman wrote: “I, like a lot of people, no longer have to stop traffic to get out my car and stand staring up at a tree or telegraph pole shouting 'Fagin!'. My eyes are sore looking for him since he went missing. Thrilled he’s home being loved and spoiled. Made my week!”

Fagin's disappearance came just as Joe was about to pop the question to Jessica: despite his emotional turmoil, he went ahead with the proposal anyway.

“She told me it wasn’t the most romantic proposal in the world,” admitted Joe. “For some reason, I told her it wouldn’t be the same without Fagin, which earned me a stern look.

“Fagin has always been quite territorial and can get a bit jealous. If I put an arm around Jess when watching TV, he’ll give me a peck. If she hugs me when I get home from work, Jess might get a peck from Fagin.”

Now that Jessica has said “yes”, she will have to accept there will always be three in the marriage. But she has laid down certain red lines over which Fagin cannot cross.

“We’re hoping to get married in the local church,” said Joe. “I said it would be great if Fagin could carry the ring. But Jess said no way, he’ll probably disappear with the ring.”

Joe has paid Fagin’s finders the £200 he promised for the bird's safe return. In turn, they have donated the money to Helping Hand Corvid Rescue.

For the latest breaking news stories and incredible tales from the Daily Star, sign up for our newsletter by clicking here .