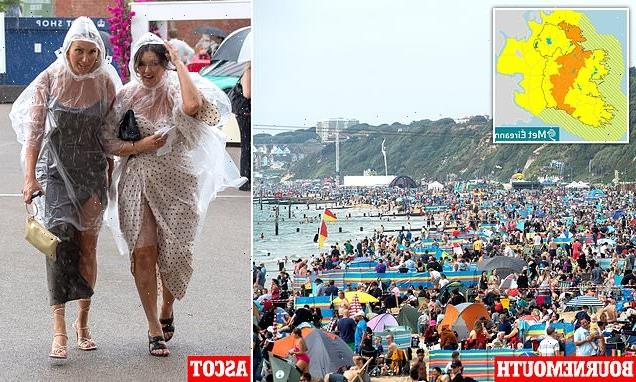 Soaking up the last of summer: Hundreds head to the beach in Bournemouth but umbrellas are out at Ascot as Met orange weather warning in place for Ireland with up to two INCHES of rain and thunderstorms expected there tomorrow

Brits have today headed to Bournemouth beach in their hundreds to soak up the last of summer and watch the UK’s largest air festival but umbrellas were out at Ascot- while the Met Office have put an orange weather warning in place for Ireland, with up to two inches of rain and thunderstorms expected there tomorrow.

The downpours are expected on Sunday morning in 13 Irish counties, with the orange warning in place from 4am to 8am on Sunday. Overnight tonight, a less severe yellow warning has been issued for much of the country.

Met Eireann said that heavy rain will move northwards across much of the country on Saturday night, clearing from the north and north-west on Sunday.

The torrential rain could result in surface flooding. There is also the potential for thunderstorm activity and lightning strikes.

It is also likely to impact Co Laois, where more than 70,000 people are expected to gather for the Electric Picnic festival in Stradbally.

Meanwhile, a yellow weather warning has been announced for Northern Ireland. The rain weather warning is in place until midnight on Saturday and between 2am and 11am on Sunday.

Elsewhere, crowds of people were pictured on Bournemouth beach having their last taste of summer- where temperatures are currently 20C (68F) as they watched the UK’s largest air festival.

But at Ascot Racecourse attendees clutched umbrellas as they arrived for the September Racing Weekend, dressed in their finery.

And at Reading Pride, people watched the procession as heavy rain fell around them, with many of them holding umbrellas and sporting raincoats. 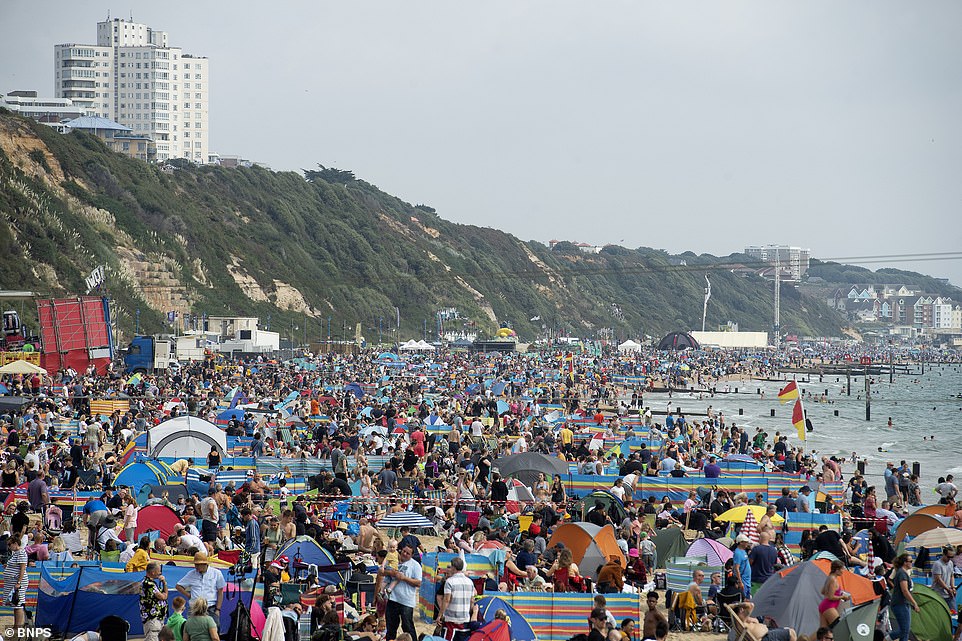 Beach goers pack the beach at Bournemouth Air Festival in Dorset. Hundreds of thousands of people are expected over four days in Bournemouth, pictured 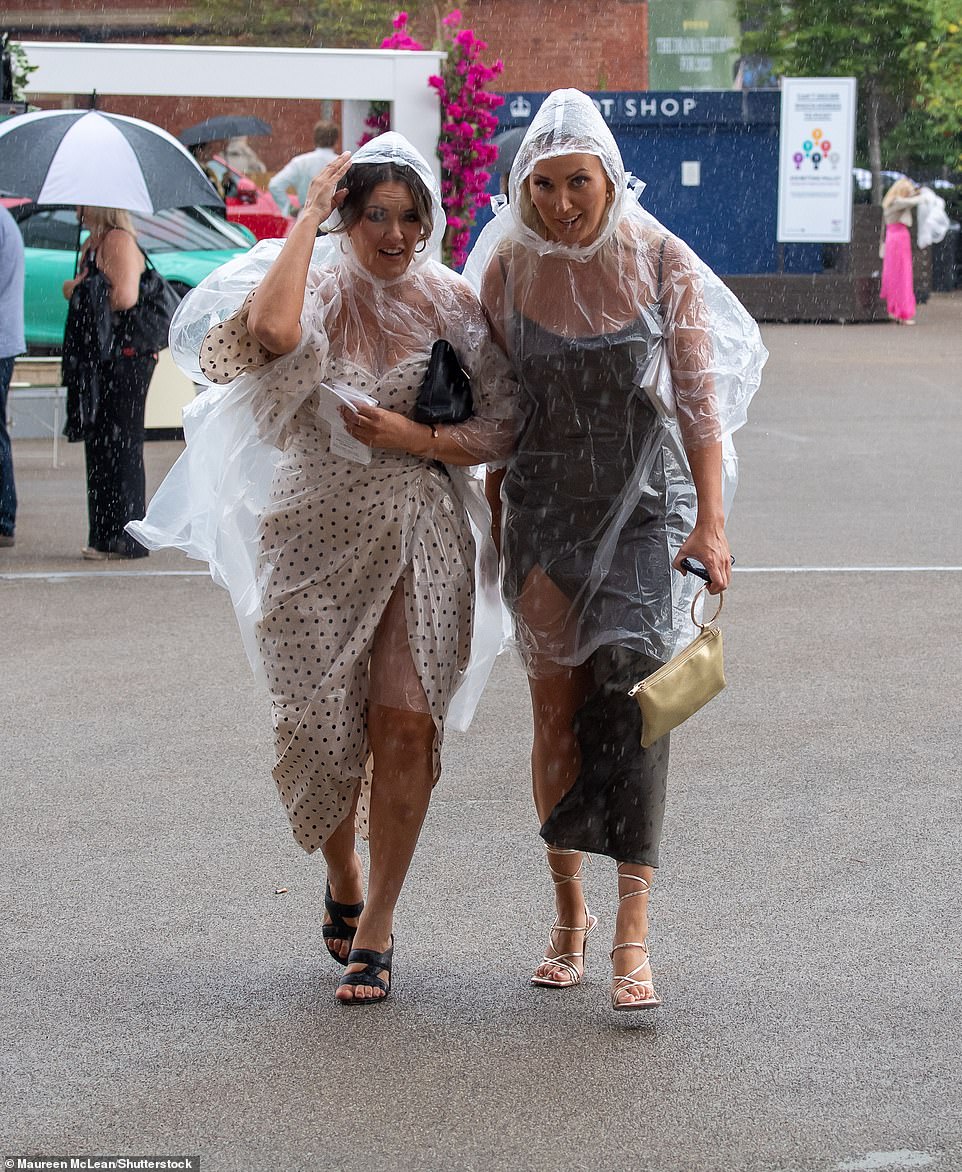 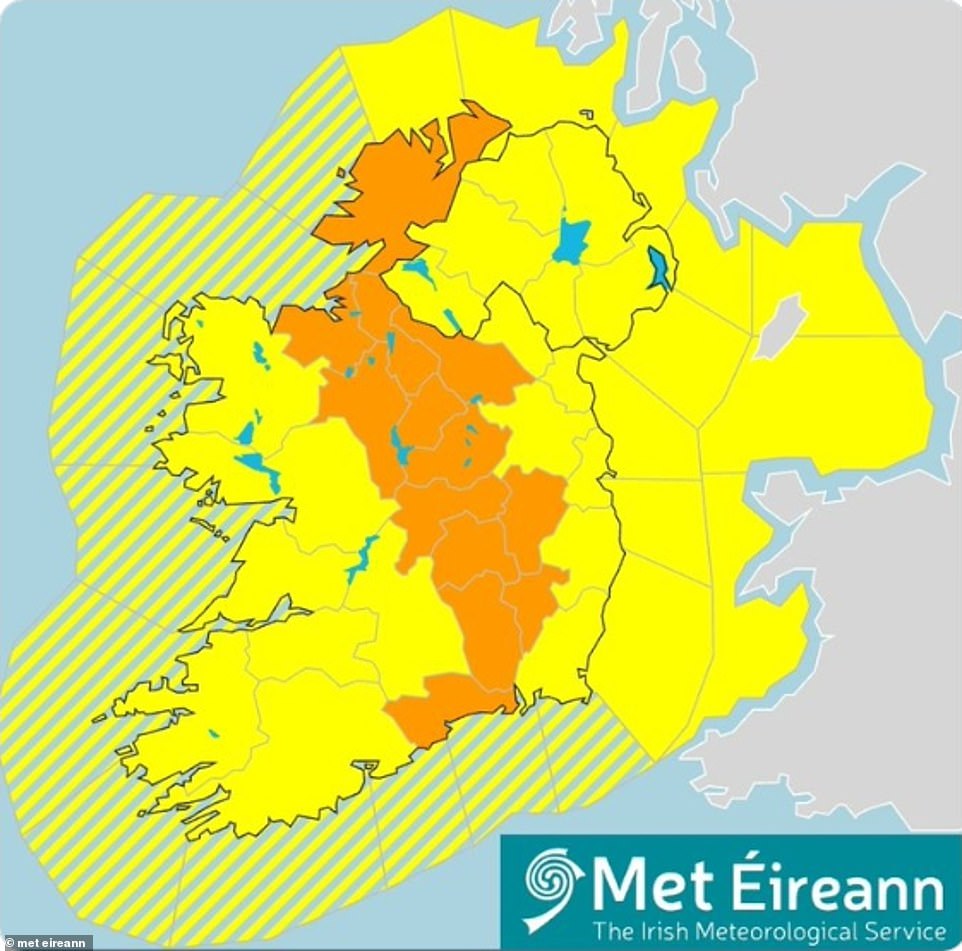 Conditions are humid this weekend in the south of England with highs of 26C (79F).

And tomorrow, highs of 23C (73F) are expected, on what is the first weekend of meteorological autumn, which began on Thursday.

Today, showers of heavy rain were expected to affect parts of Northern Ireland, western Scotland and some other western areas.

There were some sunny spells in central and eastern parts of the country. Scattered showers were also predicted, possibly heavy with a risk of thunder in northern areas. 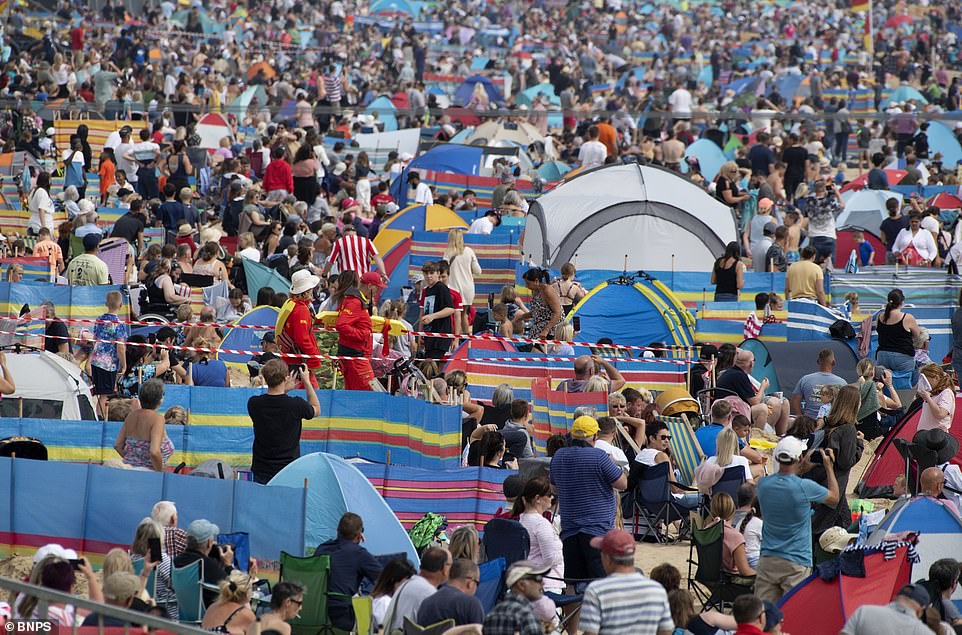 Earlier this afternoon, temperatures were 20C (68F) as people relaxed on the beach in Bournemouth and settled in to watch the air show, pictured 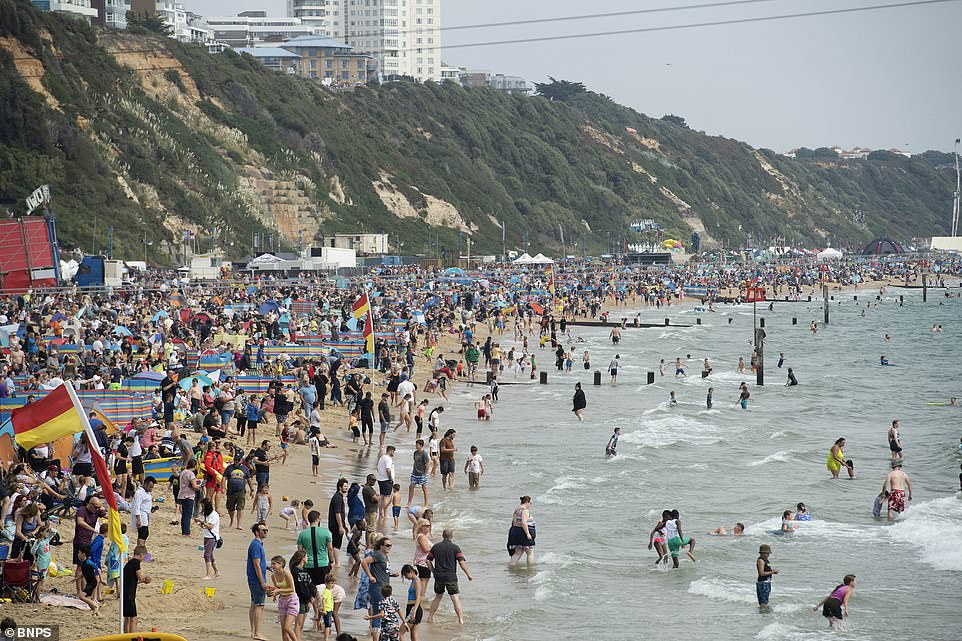 People also swam in the sea as they attended the air festival, which runs until the 4th September (pictured) 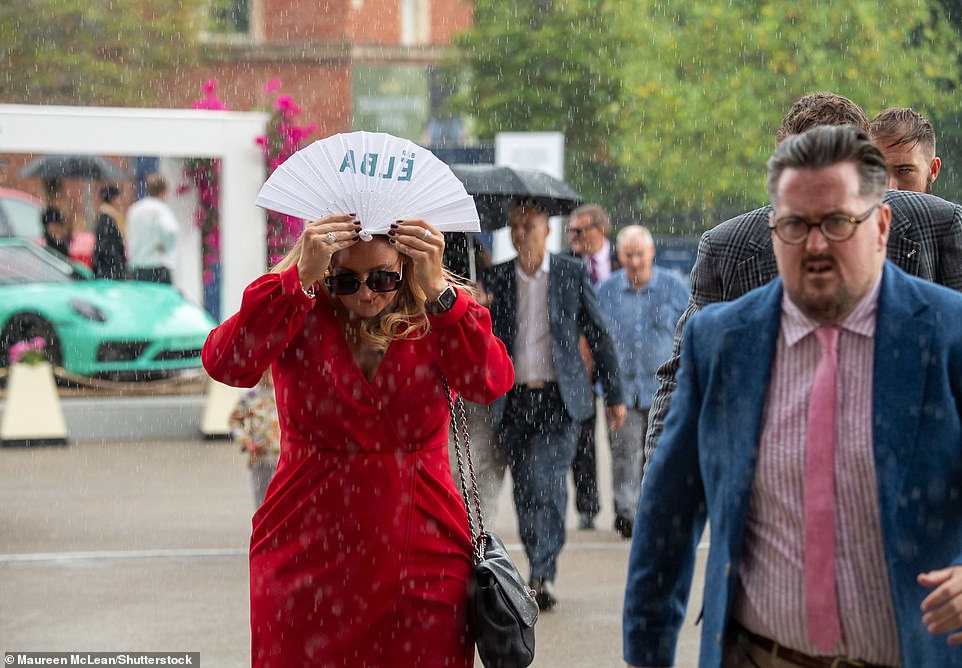 England has had its joint hottest summer on record, the Met Office said.

Provisional figures show the summer of 2022, covering June, July and August, had an average temperature of 17.1C, tying with 2018 to be the warmest in records stretching back to 1884.

It means that four of the five warmest summers on record for England have occurred since 2003, as the effect of human-induced climate change is felt on the country’s summer temperatures, the Met Office said.

The hot summer included the record-breaking heat in July, which saw temperatures climb above 40C for the first time in the UK.

Much of England has been gripped by drought after months of low rainfall, with the hot, dry conditions drying up rivers, damaging crops and fuelling wildfires that have destroyed homes and land.

Tomorrow, temperatures will be maximum 24C (75F) or 25C (77F), with wet and windy weather moving north across western parts.

There will be further spells of rain in the north and later in the southwest but otherwise, sunny spells and few showers.

Looking ahead, over the next few days, spells of heavy rain and showers are expected for all parts of the UK. At times, drier and brighter spells are possible, particularly in the east.

Met Office Meteorologist Dan Stroud told MailOnline: ‘Generally we are looking at an unsettled spell of weather coming up, there is an area of low pressure to the West of Ireland.

‘There is a cloud around, with areas of rain and showers, some rain is expected to be heavy.’

It is expected that temperatures will be in the low to mid 20s next week, remaining warm and humid.

Dan said that the weather is expected to be ‘wet, windy and warm’ and that the country is entering into a spell of ‘unsettled weather.’

‘Monday, temperatures will be into 25 and 26 across eastern areas and low 20s under that cloud, with similar values expected on Tuesday.

‘By Wednesday we are looking at low 20s for the east. We’ve had a change in type.

‘We had a record-breaking August and now we are looking at something a lot more seasonal.’