The president of one of Louisiana’s Gulf Coast parishes spoke bluntly Saturday afternoon as she warned residents about the potential dangers of Hurricane Ida.

“I want to reiterate, the storm surge that we are expecting is unsurvivable,” Jefferson Parish President Cynthia Lee Sheng said at a news conference, hours ahead of Ida reaching Category 3 and then Category 4 early Sunday, with winds over 130 miles per hour.

“You have time to get out,” Sheng told residents, “especially in those areas where there is a mandatory evacuation. We need you to leave immediately.”

“We need you to leave immediately.”

Jefferson Parish, with about 440,000 residents, is located close to New Orleans and the Louisiana coast.

News reports on Saturday showed vehicles backed up on New Orleans-area highways as residents heeded warnings from public officials and tried to leave the area before Ida’s expected landfall Sunday.

Forecast for large portions of Louisiana included strong winds and storm surge and a high potential for flash flooding. Storm surge refers to a rise in sea level in association with a storm, thus resulting in flooding of coastline areas. 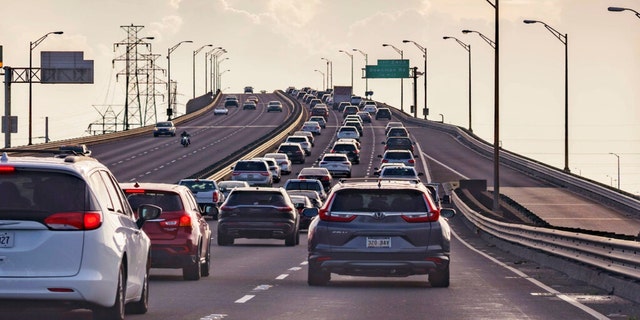 Vehicles head slowly east on the Interstate-10 twin spans leaving New Orleans while only a trickle of cars heads west back into the city before landfall of Hurricane Ida in New Orleans, Saturday, Aug. 28, 2021. (Associated Press)

Sheng’s greatest concern was for residents choosing to stay at home in remote areas that lie outside the New Orleans levee protection system, which is designed to limit flooding, WKRG-TV of Mobile, Alabama, reported.

In preparation for Ida’s impact, crews were out clearing catch basins and making sure construction sites were secure, according to the station.