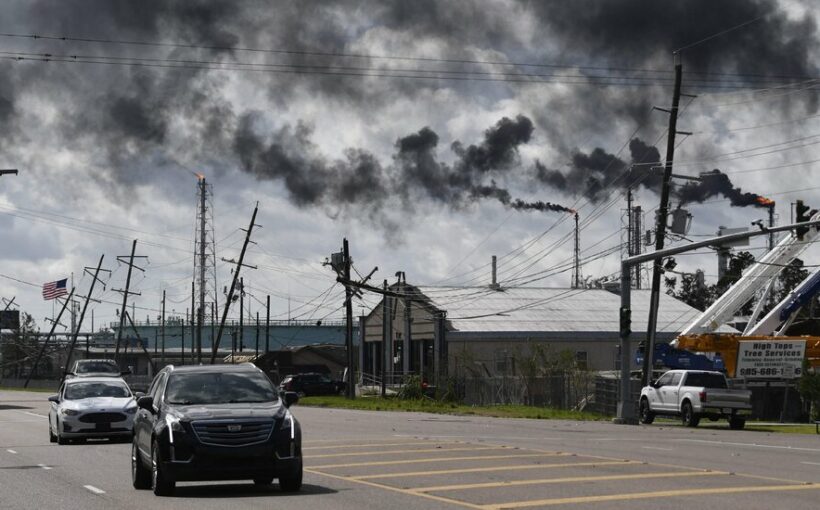 The most intense hurricane on record to strike Louisiana swept through one of the nation’s largest chemical, petroleum and natural gas hubs. And while it may take days or weeks for the full extent of the storm’s impact to become clear, early reports of damage have heightened concerns over the vulnerability of the region’s fossil fuel infrastructure to intensifying storms.

On Monday, officials warned that floodwaters had spilled over a temporary levee erected near a Phillips 66 refinery in Plaquemines, the state’s southernmost parish and one of most severely affected by Hurricane Katrina 16 years ago. And in neighboring St. Bernard Parish, almost two dozen barges unmoored by Hurricane Ida’s 150 miles-per-hour winds damaged the dock at the giant Valero Refinery there. And news photos showed extensive flooding and dark flares at Shell’s refining and chemical complex in Norco, farther inland.

Earlier hurricanes, including Harvey in 2017 and Laura in 2020, caused oil and chemical releases from storage tanks and other installations along the coast.

Bernardo Fallas, a spokesman for Phillips 66, said the company would “conduct a post-storm assessment of the refinery and its levees when it is safe to do so.” The refinery “completed a safe and orderly shutdown of operations” ahead of Ida’s arrival, he said.

Guy McInnis, the St. Bernard Parish president, said flood levels there had reached 14 feet and the loose barges had caused “extensive damage” to the Valero refinery’s docks. The Coast Guard has secured the barges, but “we will be out of business for a while,” Mr. McInnis said. Valero did not immediately respond to a request for comment.

Louisiana’s 17 oil refineries account for nearly one-fifth of the nation’s refining capacity, with the ability to process about 3.4 million barrels of crude oil per day, according to the United States Energy Information Administration. In 2020, Louisiana’s two liquefied natural gas export terminals shipped out about 55 percent of the nation’s L.N.G. exports.

Much of that capacity was built after Katrina, and plans are in the works for a dozen more liquefied natural gas export terminals in the region — including at Port Fourchon, where Ida made landfall on Sunday.

Environmental groups have criticized those plans, saying they contribute to the very climate crisis that poses a threat to those facilities. “Last year, Laura also made landfall at record strength in the other part of the state where they want to build this mess,” said Anne Rolfes, director of the Louisiana Bucket Brigade, a local environmental group. “In the best of times, it’s a disaster.”

Oil and gas development has also been a big driver of coastal wetlands loss in Louisiana, as canals dredged by producers hasten saltwater intrusion.

Neighborhoods just outside these facilities, many of which are disproportionately made up of minorities, face other risks.

Refineries and chemical plants belch toxic pollution into the air when they shut down ahead of big storms, putting nearby neighborhoods at risk of exposure. In 2017, Houston’s petrochemical plants and refineries released millions of pounds of pollutants in the days after Hurricane Harvey began barreling toward Texas. And in the storm’s aftermath, explosions rocked a chemical factory northeast of Houston that had lost cooling power, triggering evacuations and releasing fumes that sickened emergency workers.

Real-time pollution data was not yet available. But the risks come in a state that already has the highest toxic air emissions per square mile in the country. According to an audit of Louisiana’s environmental regulators published by the Louisiana Legislative Auditor’s Office in January, the state had an average of more than 1,200 pounds of toxic air releases per square mile — far ahead of Ohio, the state with the second-highest emissions of about 900 pounds per square mile. The pollution has earned Louisiana’s industrial corridor, pummeled by Ida, the nickname “Cancer Alley.”

The state’s offshore oil and gas rigs pose another threat. In 2004, Hurricane Ivan destroyed an oil platform about 10 miles off the Louisiana coast, triggering what is still the longest oil spill in United States history.

A recent report published by the U.S. Government Accountability Office found that oil and gas producers have been allowed to abandon 97 percent of offshore pipelines in the Gulf without incurring any penalties.

“Hurricanes can move, and have moved, pipelines significant distances, creating a slew of risks to the marine environment, navigation and fisheries,” said Kristen Monsell, a senior attorney at the Center for Biological Diversity, an environmental nonprofit group. “It’s very scary to think about the increased risk of offshore oil spills or other accidents.”

Environmental groups hope that the succession of destructive hurricanes will bring about a wider debate over the state’s energy and climate policies. According to the Energy Information Administration, Louisiana ranks among the top three states in the nation for total energy consumption, as well as energy consumption per capita, largely because it has so many energy-intensive industries. The state ranks next to last in renewables as a share of total energy consumption.

But in a shift, Gov. John Bel Edwards, a Democrat, said this year that the state needed to start drastically reducing the fossil fuel emissions that are the main driver of climate change and its catastrophic effects, including intensifying hurricanes, flooding, rising sea levels and extreme heat.

“Taking action to address climate change can strengthen our communities and our economy,” Governor Edwards said.