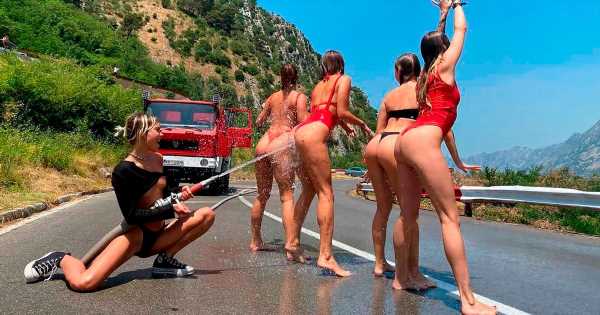 Three members of the notorious Ukrainian Butt Squad were detained by police in Montenegro for “shamelessly” appearing undressed on a public road.

The group first came to attention when they were jailed for a racy balcony photoshoot in Dubai.

In recent days they switched their support from Ukraine to get behind England in Euro 2020 with a video backing Gareth Southgate’s team ahead of the semi-final against Denmark.

In the latest brush with the law, they were promoting a car race in the resort of Kotor, and also “assisting” local firefighters to clean the road.

But three of the group, Diana Oksanich, 19, Ruslana Kovkova, 21, and Viktoria Rohalchuk, 21, were held in police cells for being inappropriately dressed and fined at a midnight court hearing.

US businessman Vitaliy Grechin, who has a home nearby, was also initially detained but then released.

All had been earlier held in a jail 'hell' in Dubai after the notorious balcony stunt where a group of models stripped on a balcony in the city's upscale Marina neighbourhood.

Dubai police said they arrested a “group of people who appeared in an indecent video” on charges of public debauchery.

Before the latest stunt Grechin had invited the women to stay with him at a vacation home in Montenegro, and had earlier flown the so-called Butt Squad to Dubai on an all-expenses trip ahead of the scandalous picture.

“In the preparations for this race, they were helping the firefighters wash the road,” said the playboy, once a donor to former US president Barack Obama.

Race organisers had asked them to help publicise the event, he said.

“The firefighters loved the idea, all 20 of them.

“They were the ones who leaked the pictures to the media.”

A report said judge Ivana Vukasović had fined three of the women 450 euros each for violating public order laws.

“They behaved shamelessly in a public place,” the court ruled.

They "stripped naked and posed on the asphalt road, taking video recordings and photographs for ten minutes”.

Before she was taken away for questioning, Diana posted: “Guys, just in case…The police are here.

“If I'm not in touch, you know where to find me – locked up in Montenegro.”

Another ex-Dubai squad member Kate Kashenko posted: “The girls are safe and sound.

“They just came back. I nearly died of fear, over what happened to them.”

She said: "Do not believe the police in any foreign country. In your own country you have at least a chance to get out.”