Home » World News » Inside the auction room: Big sales and regrets as housing market powers on 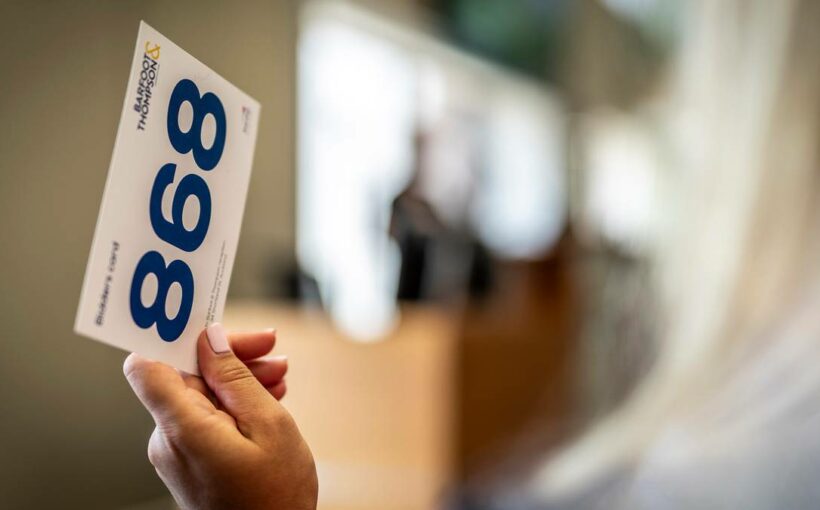 He was now new owner of a three-bedroom Glendowie unit in Auckland’s east, bought to secure his 21-year-old daughter’s future.

It’s $899,000 sale price was among the lowest at Wednesday’s Barfoot & Thompson auctions where larger family homes mostly sold for between $1.2 million and $3.8m.

De La Macorra fist pumped the air as an agent dived in for a hug, but underneath his heart was heavy.

His new unit was overpriced, its water pipes had burst a few years ago and it was made from “very poor materials”, he later said.

He forked out the cash, however, because – having paid off his family home – he was determined to leave behind two houses, one for each of his children.

Without help, he couldn’t see how they would ever afford to buy.

“There is just no way, the numbers don’t add up. New Zealand has to decide what sort of country it wants to be,” De La Macorra, who migrated from Mexico two decades ago, said.

He prided his adopted country’s egalitarianism, yet home ownership rates have been plummeting in recent decades as booming prices transformed Auckland into one of the developed world’s least affordable housing markets.

That led the Government to last week unveil a suite of measures aimed at slowing down investors and “tilting” the housing market in favour of first home buyers.

Two new tax measures, in particular, aimed to force investors to now pay tax on any gain in the value of a house if resold within 10 years and prevent them from claiming home loan interest payments as a tax deductible business expense.

Yet the tens of millions of dollars changing hands at Wednesday’s auction suggested Auckland’s housing market had plenty of life left in it yet.

Auction manager Campbell Dunoon declared the day a success with 19 of 28 homes selling, including those planned for auction but selling prior to the day.

New buyers, smiles on their faces, could be seen making their way from the auction room into small offices to sign the contract paperwork.

Dunoon said it was not just the sales, but the competitive bidding that indicated buyer interest was just as strong as a week earlier.

Partly that was due to the auction featuring inner Auckland houses that appealed to buyers moving from one family home to another – sales that would be unaffected by the Government’s new changes.

They hoped to send their two teenaged sons to nearby Auckland Grammar School and crossed their fingers the unit would sell for about $1m.

That hope lasted just one and a half minutes before bidding soared past the million-dollar mark on its way to a $1.34m sale price.

“We were waiting for our chance to lay a bid, but poof, it was already gone,” the couple, who didn’t want to be named, said.

Disappointed, they chalked their first time in an auction room down to experience.

They said New Zealand’s high house prices and rents had been a rude shock when they arrived two years ago, compared to their time living in Singapore, South Korea and the US.

Yet they still hoped to be able to buy within the next two-to-three months.

A rough, two-bedroom Panmure do-up sold to a property trader for $683,000 – a price sitting within Barfoot and Thompson agents Margaret Johnston and Gurpreet Hayer’s $650,000 to $700,000 expected sale price.

Hayer said the new Government rules were unlikely to drive traders from the market.

That was because buyers of properties like the Panmure do-up planned to spend as little time possible renovating them before on-selling.

That meant they would already have paid tax on the home’s resale under the Government’s old five year bright-line rule, Hayer said.

The inability to deduct home loan interest payments as a business expense would also have less effect on them due to the short period of time they owned the property, he said.

Another auctioned home on an 875sq m block in Hillsborough in Auckland’s inner south sold for $1.65m to a developer.

A tall, smartly dressed young man – who didn’t wish to give his name – lost the bidding battle in what would have been his first project as a developer.

He had seen opportunity to renovate the existing home and build new townhouses behind – homes that would have been exempt from the Government’s new tax changes.

He had hoped the Government changes would create uncertainty that would cool buying prices for him, but said, realistically, he expected developers to still pay a premium.

De La Macorra, meanwhile, said as a small time investor he felt privileged just to be able to buy because home ownership was now out of reach of so many.

He supported the Government’s changes because he feared wealth inequality of a scale like that in countries like Mexico taking root in New Zealand.

“I can see already see that unfairness growing in the system,” he said.