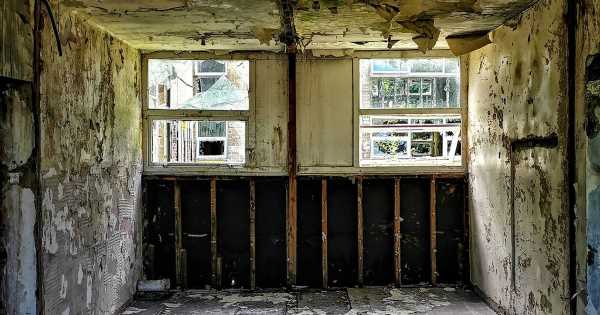 The inside of an abandoned apartment where the Yorkshire Ripper killed one of his victims has been captured by an urban explorer.

A collection of haunting images show the apartment and building where Patricia Mitra, also known as Patricia Atkinson, once lived and was murdered at the hands of the notorious serial killer.

Patricia, 32, was the fourth victim of the Yorkshire Ripper after she accepted a lift home from Peter Sutcliffe.

A photo shows a dilapidated and dark empty hallway before the explorer goes through the building to enter the former apartment of Patricia, which features peeled paint and debris on the floor.

The photos were taken by urban explorer Matt Scott, who took the snaps in Bradford, West Yorkshire, for his Facebook page Lost Places and Forgotten Faces.

Oak Avenue Flats was the residence of Patricia and the place of her death.

She was offered a lift home by Sutcliffe after she had been on a night out in 1977.

Once they arrived at Patricia’s flat, Sutcliffe used a claw hammer to murder her before leaving her body to be found by a friend the next day.

"It was a very eerie and sad place to be, knowing what had happened in those flats," said Matt.

"I had a very unpleasant feeling throughout the exploration. I was feeling very overwhelmed afterwards."

He went on: "I had another place nearby I wanted to check out, but instead, I decided to visit Patricia's grave on the other side of the city."

Sutcliffe killed 13 women in total during his killing spree which lasted over five years.

He was also found guilty of the attempted murder of seven other women before he was convicted in 1981.

Sutcliffe spent three decades at Broadmoor Hospital before being moved to HMP Frankland in County Durham in 2016.

He died in November last year after refusing treatment for Covid-19.

Patricia was buried at Scholemoor Cemetery. Her murder was one of thirteen carried out by Sutcliffe, who died in prison in November 2020.

Matt said: "I hope Patricia is in a better place and was able to find her peace."