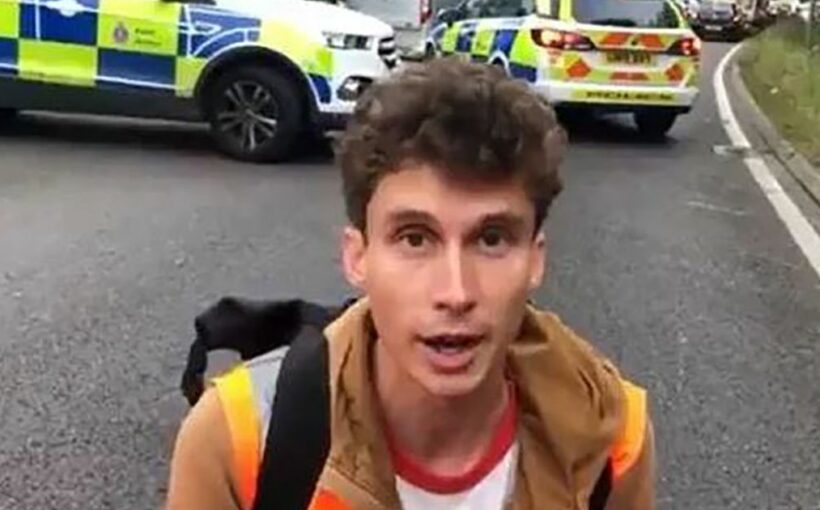 A prominent climate activist who blocked the M25 motorway admitted to being a 'hypocrite' for protesting for climate action while making high polluting journeys.

Cameron Ford is a climate activist and ringleader who's often seen at Extinction Rebellion and Insulate Britain protests. Last month, he was photographed being dragged away from blocking the M25.

According to reports, Ford took a 10,000 mile, four-month-long trip across Canada, beginning in the Autumn of 2019. The flight from the UK to Canada alone stretched 8,500 miles.

During his trip to Canada, he extensively travelled across the country, even posting occasional updates from Edmonton, a lake in Alberta. Later, he was pictured sledging in British Columbia.

He returned to the UK in January 2020, before taking another trip that August across Europe, the Express reports.

In an album posted on social media entitled “From Whittlesford to Warsaw”, on August 29 he posted pictures showing himself with a companion at a series of different locations.

The round trip reportedly would have been over 1,500 miles – which Mr Ford drove in a “lovely little” diesel-powered Citroen van.

When contacted for comment, Mr Ford told the Mail Online that “we’re all hypocrites.

“As soon as I found out about the environmental crisis I ramped that right down.”

According to NASA, an increase in carbon dioxide in the Earth’s atmosphere was first linked to global warming in 1938. A scientific consensus about climate change came about in the 1980s, with the Intergovernmental Panel on Climate Change established in 1988.

Mr Ford lashed out at the personal scrutiny, stating: “Let's report on the climate crisis. We're 95 percent likely to miss the 2 Celsius global warming target – that’s what journalists need to focus on.”

He has previously told a local paper that he didn’t feel comfortable blocking roads as it was “unsettling”.

But, he said that the disruptiveness of Insulate Britain’s activities was “kind of why we’re doing this.

“Because if we don't reduce carbon emissions, the climate and biodiversity crisis will be the ultimate disruption.”

Mr Ford is not the first Insulate Britain activist to come under scrutiny.

On Tuesday, the Mail revealed that neighbours of Insulate Britain mastermind and XR co-founder Roger Hallam had seen up to six gas-guzzling vehicles on his land in Carmarthenshire.

When the Mail visited the property earlier this week, they spotted five on the farm, including an Ivesco 2.3 litre diesel, a blue Ford 1.9 litre 4×4 and Kia, Volkswagen and Mercedes vehicles – all of which are diesel.

Mr Hallam also came under fire after suggesting that he would not move out of the way of emergency services vehicles while blocking roads – as some Insulate Britain protesters had been filmed doing.

The eco-warrior was asked on the Unbreak the Planet podcast what he would do in such a situation.

He was then asked: “And if it were an ambulance, and there was someone that could potentially die in there, would you stay there?”

@Emmalouisejones said that Insulate Britain was “led by a bunch of hypocritical, trouble-making anarchists who clearly don't give a toss about eco issues”.

Meanwhile, @vjquinton wrote: “This eye-watering level of hypocrisy that makes me feel physically ill most days.”

And @BasedParalegal claimed that it was “proof” that the group were just “crisis actors”.

On Monday, comedian Rob Beckett joked that if he had to organise a stag do, “one of the group activities would be dragging Insulate Britain protesters off the road.

“Last one to get one has to down a shot. Much cheaper than paintball,” he added.