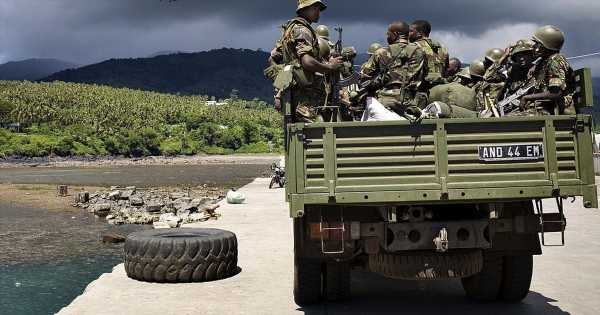 Several people dead and hundreds are trapped in a hotel after a three-day-long attack by ISIS-linked militants.

The terrorist group launched the assault in Palma, Mozambique, near a liquified natural gas (LNG) site in Cabo Delgado province on Wednesday afternoon, March 25, and has since seized the town.

It's estimated that 2,600 people have died after raids on towns and villages in the region, according to US-based Armed Conflict Location and Event Data.

Around 700,000 terrified residents have also been forced to flee into the surrounding forest and 180 government workers and civilians sought shelter at the Amarula Palma hotel, where they remain trapped.

A worker on the LNG site and eyewitness to the attack said: “Almost the entire town was destroyed. Many people are dead.

"As locals fled to the bush, workers from LNG companies, including foreigners, took refuge in hotel Amarula where they are waiting to be rescued."

He did not give details about the casualties.

Human Rights Watch said the attackers are linked to a group known locally as al-Shabab, which has ties with ISIS.

The organisation said: “Several witnesses told Human Rights Watch that they saw bodies on the streets and residents fleeing after the Al-Shabab fighters fired indiscriminately at people and buildings."

Helicopters were reportedly seen attempting to make a rescue effort for the people remaining in the hotel.

A witness said they were “a corridor to rescue the approximately 180 people trapped in the hotel”.

“But until nightfall, many people remained on the premises while militants tried to advance towards the hotel. We don’t know if we will be rescued,” he added.

The Mozambique government confirmed the attack on the town, on March 25.

They said soldiers had launched an offensive to evict the fighters from the town, the hub of the giant gas project.

The attacks began on Wednesday, March 24, hours after Total announced a gradual resumption of work at the LNG project, which had been hampered by the continuing rebellion in the region.

On Friday, the US embassy in Maputo condemned the attack, pledging its commitment “to working with the government of Mozambique to counter violent extremism”.