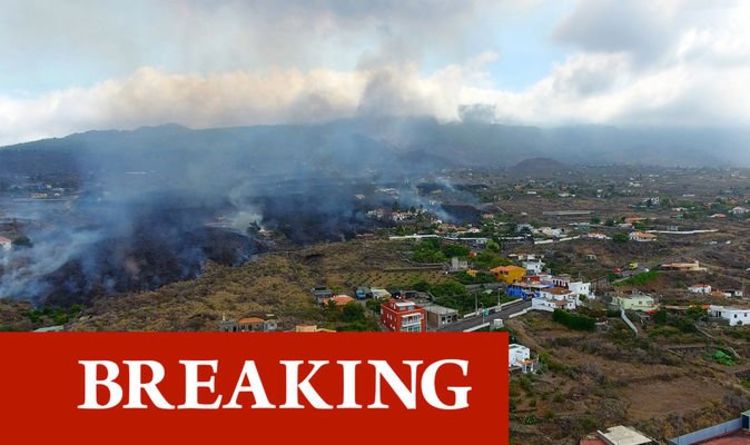 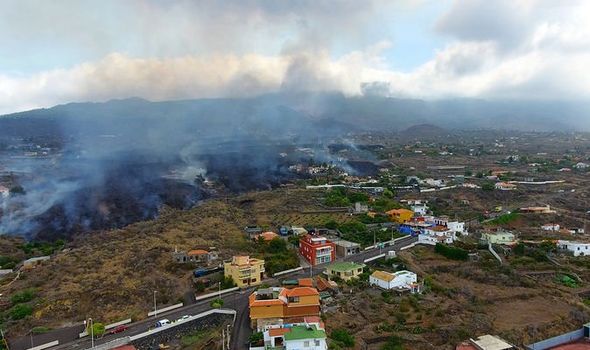 All 1,200 residents of Todoque have been ordered to leave their homes after Cumbre Vieja erupted on Sunday. The town on La Palma is at risk of being wiped out by the lava plume, moving at a speed of 120 metres per hour.

Todoque, in the municipality of Los Llanos de Aridane, is in between the lava plume and the ocean.

Firefighters say they can do nothing to stop it and can only hope that as few properties as possible will be swallowed up.

The town includes a church, blocks of flats, modern villas with pools and a school.

A Consortium spokesman said: “The reality that we are witnessing every day that we perform our functions as firefighters on the island of La Palma is harsh and it is difficult for us to assume the impossibility of stopping what nature executes slowly.

“We will continue working in such a situation with churned stomachs, hoping that the damage will be as minor as possible.”

Miguel Ángel Morcuende, technical director of the Canary Islands Volcanic Emergency Plan (Pevolca), said it was unknown what day the lava will reach the sea.

He warned the plume could reach the ocean on Tuesday or Wednesday, and added it will be slowed down because of “obstacles in its way” such as the town of Todoque.

He added there are now more than 6,000 people displaced because of the lava flows, many of them being put up in shelters.

Mr Morcuende said they were safe and being well looked after, with plenty of food to go round.

Borja Perdomo, Councillor for the Environment of the Cabildo de La Palma, also shared several roads have been ruined by the lava plume.

He said: “The lava has buried more than 500 metres of track.”

The Government of Spain, the Canary Islands and the Cabildo de La Palma have asked the population to refrain from circulating on the roads near the volcano and also from approaching the lava flows, because “the situation is not safe”.

The warning came after the appearance of a new eruption mouth 900 metres from the main one demonstrated on Monday night.

Mariano Hernández Zapata, president of the Cabildo de La Palma, said: “We ask you for your safety and so that the emergency teams can carry out their work.”