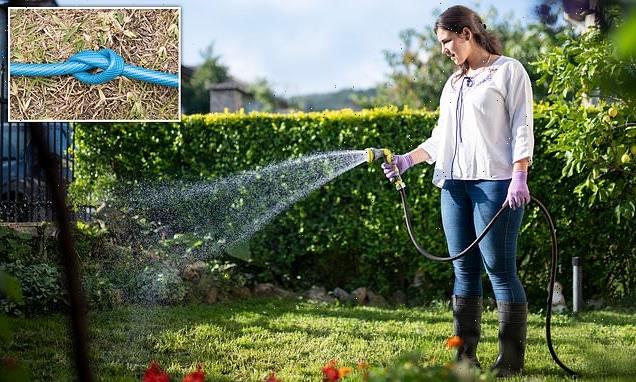 Don’t be a water-waster! Are you worried your lawn can’t stand the heat? Letting it go brown won’t harm it a bit, says this expert… because grass is far turfer than you think

When Wimbledon returns to our television screens later this month, it will be with pristine green courts rolled to a baize perfection.

This, so the subliminal message goes, is how grass should be. Grow it right, water it well and you ought to be able to play snooker on it, never mind tennis.

Don’t believe a word of that. If you’re looking after your garden lawn properly, it can be bone dry and as brown as an over-ripe banana — and still be healthy.

The perfection of Wimbledon is a myth. And I do know what I’m talking about: before I became an adviser to the National Trust on its green expanses, with a few A-list celebrity country homes in my portfolio, too, I was a golf course superintendent.

Grass for international golf courses and tennis tournaments bears no relation to what you see beyond your patio doors, whether it’s the size of a field or a pocket handkerchief. 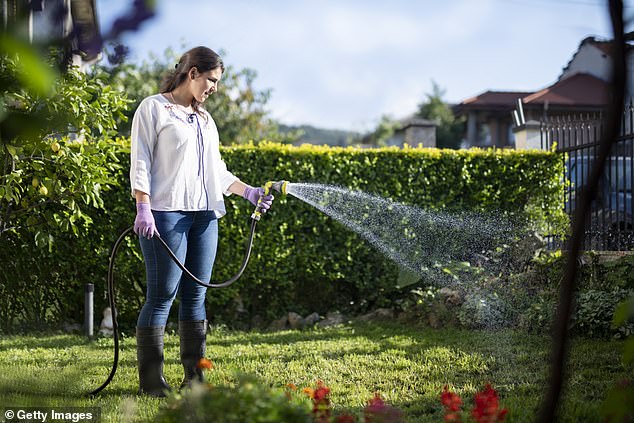 For a start, all the courts at Wimbledon will be ripped up, a week or two after the finals, and new grass laid. You don’t need to do that in your garden.

And you don’t need to be watering your lawn constantly, either. Over the Bank Holiday, during the first prolonged sunny spell of the year, hundreds of thousands of eager gardeners got their sprinklers out and turned on the taps.

It was unnecessary — and a shocking waste of water. An hour with the hosepipe on full blast uses as much water as the average person consumes in a week, according to the Royal Horticultural Society.

We have just limped through the fourth-wettest May on record. The soil won’t parch and crack at the first glimpse of the sun during a British summer.

And even if we do have a prolonged dry spell, such as the drought of 2018, there really is no need to water your lawn.

In fact, there are excellent reasons to do nothing of the sort.

Grass is a super-plant. It’s nearly indestructible. Botanists can’t agree on when it first appeared on Earth, but it’s been around for hundreds of millions of years.

Through Ice Ages, asteroid impacts and continental drift, grass has thrived. It has seen the dinosaurs come and go. Current levels of climate change — though a serious problem for human beings — are practically insignificant for grass.

Like the camel, grass has evolved to survive for long periods without water. Letting it dry out does not make you a bad gardener.

Under a blazing sun, all lawns — healthy or not — can turn brown. That’s natural, as the residual moisture retreats to the roots to keep the plant alive.

When the rains return, healthy grass will quickly revive. It’s a different story on your flowerbeds, where ornamental plants can be killed off by a sharp drought.

That’s where you should be using your watering can. Don’t waste valuable water on the grass — direct it to the shrubs and blooms which need it urgently.

I like to think of grass as the ‘Big Brother’ plant, the one that bears the brunt of tough times to enable its weaker siblings to thrive.

What grass needs to be its best is regular pruning — or, as we usually call it, mowing.

By giving it a regular cut, you don’t just keep the garden looking neat. You’re also forcing the plant to divert energy into healthy growth, just as you do when pruning anything else. 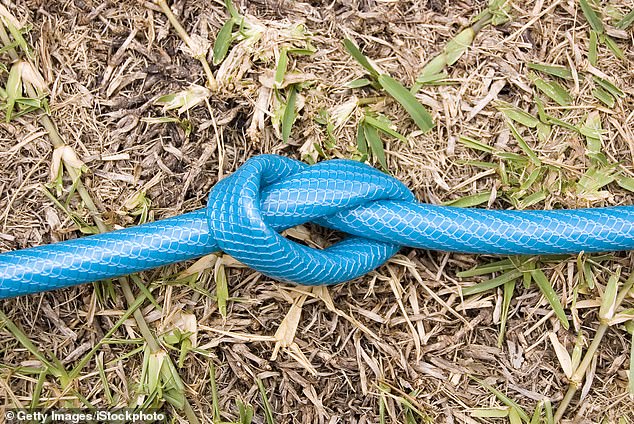 Grass has evolved to survive for long periods without water, letting it dry out does not make you a bad gardener

There’s no need to spend a fortune on a mower. I’ve used ride-on roller mowers that cost £60,000 or more for sports pitches.

In fact, you can buy ones that are three times the width of a combine harvester. But the truth is, a £50 hover mower from a budget supermarket will do the job just as well — providing the blade is sharp.

That’s crucial. The sharper the blade, the better the cut. We know that’s true for hairdressers, and it applies equally to mowers.

A barber who uses a blunt pair of scissors, and a gardener who lets his hover blade go blunt, will both do a bad job. The single-blade rotary mower is really a high-speed scythe. In the 1980s, it largely replaced the twin-blade cylinder mower that had been around since the 1820s, which is a pity because the pre-Victorian technology was actually better in some ways.

It’s easier to keep the cutting-edge razor sharp on a cylinder machine. And there’s no pleasure like walking behind a mower on a sunny morning. It’s a real stress-buster. Whatever you do, though, don’t be tempted to replace a natural lawn with artificial turf. It will be bright green all year round, but on not one single day will it look convincing or attractive.

All you will achieve is the addition of a massive sheet of plastic in a world where there’s already far too much of the stuff, to the huge detriment of the natural world.

Insects and worms cannot live in it, so garden birds go hungry — everything suffers.

Also, for environmental reasons, I don’t use petrol or diesel lawnmowers. There are battery- operated machines, even ride-ons, that work as well.

And if you don’t have time to cut the grass as often as you’d like, the battery-powered robot mowers are a marvel. It’s like having R2-D2 helping out in the garden.

Some lawnmowers come with rollers, but they aren’t necessary. Stripy grass is not automatically better. That is another myth that has sprung up from television.

Unfortunately, many people still think lawns have to look a certain way to be acceptable. There’s a snob value to stripes.

Brown grass isn’t a sign of a lazy homeowner, but of a gardener with a conscience. It tells the neighbours: ‘I’m not a water-waster.’

During water shortages, we have to act responsibly, to share what we have, and to make sure rivers and lakes don’t dry up — with disastrous consequences for wildlife.

And whatever the weather, we can make the most of what we’ve got by collecting rainwater and reusing it on the garden.

Water is the world’s most valuable resource and we should all work to preserve it. Our gardens need to be sustainable, and lawns are the right place to start.