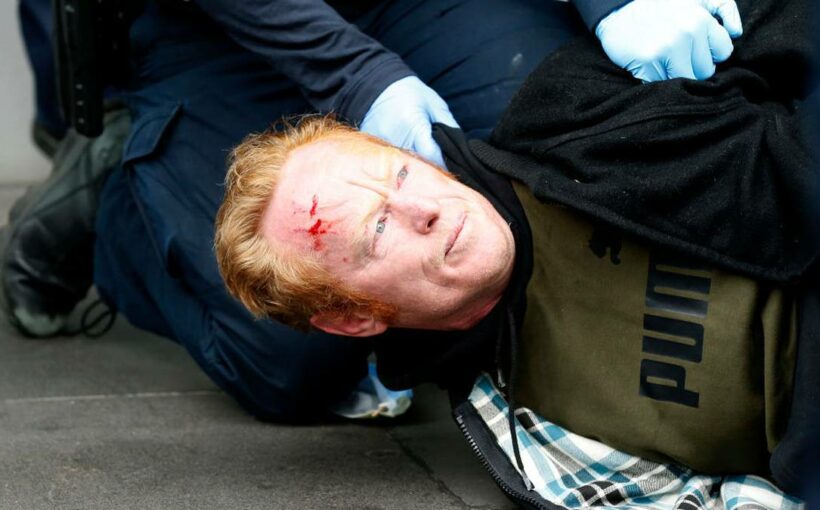 A heavy police presence has blanketed Melbourne in an effort to prevent further chaos after yesterday’s mass protest turned violent.

Multiple arrests have already been made in the vicinity of the Construction, Forestry, Maritime, Mining and Energy Union (CFMEU) headquarters, where a brawl erupted on Monday as furious construction workers protested against mandatory Covid vaccinations.

Lines of police officers, including mounted police and others bearing riot shields, gathered in the area around the CFMEU building, with helicopters patrolling overhead.

Meanwhile, a crowd of protesters is currently marching through the streets nearby. The group, more than a hundred strong, appeared to start around Flagstaff Gardens and move east towards Elizabeth Street, the State Library and Carlton Gardens, before heading south to Flinders Street.

They then moved to the Queen Victoria Market, where some people lit flares.

There have been scattered confrontations between police and members of the public, but nothing on the scale of yesterday’s clashes as of yet.

The demonstrators who unleashed chaos in Melbourne yesterday vowed to keep marching “every day” until their demands were met, despite ominous warnings from police that they were prepared to use “different” tactics to quell any further violence.

A crowd of thousands swept through the city’s streets on Tuesday, eventually blocking traffic on the West Gate Bridge. Some members of the group damaged cars and clashed with police, pelting projectiles at them. Law enforcement responded with tear gas and rubber bullets.

So far, 62 people have been arrested in connection with those events.

The Victorian government followed up Monday’s incident at the CFMEU headquarters by shutting down Melbourne’s construction industry for two weeks, citing the high spread of Covid at construction sites.

It’s worth noting that all of the remarks below came before the earthquake.

“I certainly understand that people are fatigued. They’re tired. They have got grievances and they’re frustrated. But now is not the time for protest,” Patton said.

“The chief health officer is still determined that there are guidelines in place that prohibit mass gatherings, large gatherings. The risk of the spread of the coronavirus is quite real in those gatherings.

“We don’t get to pick and choose which laws we enforce. I’d simply say this. I would implore, I’d plead, I’d ask – any other word I can use – to say to people who are contemplating coming in here today to protest, to not do so.

“You’re not going to be welcomed with open arms, I can assure you of that. We have significant tactics in place. We will be agile in our response, we will be very swift in our response, and conduct as we have seen yesterday will not be tolerated.”

Patton declined to specify which new tactics, exactly, police would deploy, or how many police would be involved, though he described their planned presence as “significant”.

“I do not want to be giving any context whatsoever to anybody who may be considering coming in here to engage in unlawful activity,” he said.

“I’m not going to talk about the tactics we’ll deploy today, but I’d be very surprised if you see any cat and mouse games today.”

He repeated his plea for protesters to ditch any plan to come into central Melbourne again.

“We will take all actions that we can to stop this. I would really ask people not to come in,” said Patton.

“We have a range of crowd control equipment that we have already deployed, and I have instructed my police command that if it’s necessary to use it, then they are to use it.

“We will of course factor in the safety of all individuals, because that’s what we’re about, but the reality is this protest can’t be allowed to occur again.”

Andrews, meanwhile, warned protesters it would be “unwise” to “test the resolve” of police.

“The ugly scenes that we saw yesterday are not only appalling, they’re unlawful. Victoria Police will take action against those who did the wrong thing,” the Premier said.

“What we saw yesterday is an insult, an insult, to the vast majority of tradies and people in the building industry who are not about wrecking, they’re about building.

“Unless we took this action, and unless we see compliance higher, then we’ll continue to see the spread of this virus. And that puts everything at risk.”

Speaking to Sunrise earlier his morning, Deputy Commissioner Rick Nugent described Tuesday as “a dark day for Melbourne”. He said police respected the right of citizens to protest, but “not during a pandemic”.

“It’s actually illegal at the moment and contributing to the risk of spreading the virus,” Nugent said.

“Today, we’ll be out again. We’ll be out with as many police as we can get, and looking at using various operational tactics.”

Asked about the composition of the crowd, he said some were genuine tradies, but others were agitators looking to commit acts of violence.

“The protesters are a mix of people. Some of them, clearly, are there purely to hide in a mob and commit violence. It is quite clear that they are not there to protest peacefully. They are there to have a go at police, to assault police,” he said.

“Others have legitimate reasons for being there, but you can see clearly that the aggression of the people is something we haven’t dealt with for a while.

John Setka, head of the CFMEU, has claimed a significant proportion of the crowd were not construction workers.

Setka tried to calm the mob outside his union’s headquarters on Monday before retreating inside when the violence started.

“There’s not much we can do. You can’t reason with some of these people,” Setka said this morning.

“I mean, I just got drowned out by some of these other morons. I don’t even know who they are. They’re not even from our industry, some of them.

“Some of them are anti-vaxxers. There are some of our members there. Thankfully there’s not that many.

“Thanks to these people, our industry are now shut for two weeks. We have done everything in our power to keep this industry going, just seeing what happened on Monday is pretty disappointing.”

During his media conference, Patton said the mob had included “people from the construction industry”, but also “a range of other people”, including some who had donned high-visibility gear and workware to blend in with the crowd.

Despite the significant outbreaks in the construction sector, Setka insisted his union was “abiding by the rules” regarding Covid.

“Our industry’s a massive industry. We can’t control what happens on some of the smaller sites,” he said.

“We are a pro-vax. We’ve run radio ads encouraging our members to get vaccinated. If you’ve got a concern over it, go see your GP, go get some proper advice. Don’t follow the internet and all the mistruths that are spread about it.

“At the same time you’ve got to respect the right of individuals who’ve actually got a genuine fear about it.

“We can’t just unilaterally say we don’t care what your fears are, you have to get the jab.”