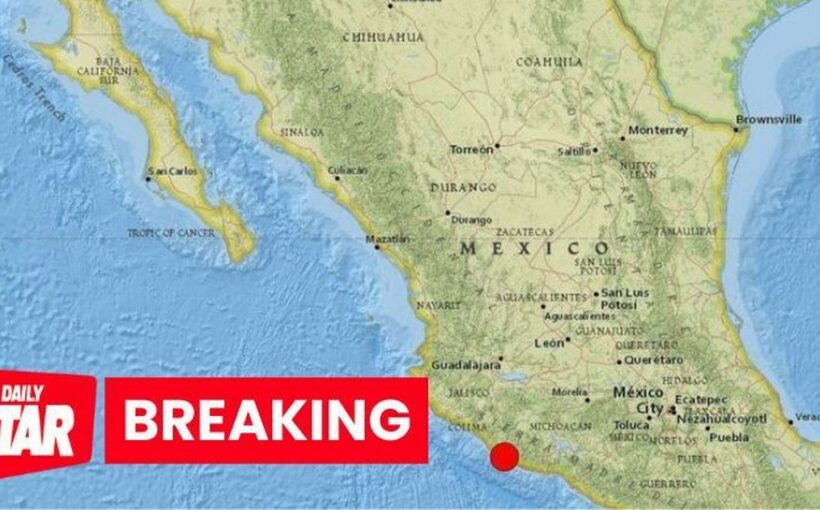 An earthquake with a magnitude of 7.6 has hit Mexico, with the south-southeast rocked by a "very strong" earthquake.

The quake struck 46km along the south-southeast of La Placita De Morelos at 10am, the US Geological Survey (USGS) has said.

Earthquake monitor @EQAlerts posted to Twitter warning that the earthquake which hit the south-southeast of Mexico was "very strong".

The earthquake hit around noon on Monday in the state of Michoacan, with tsunami warnings also issued to those in the area.

It is the third earthquake in 37 years to hit Mexico on September 19, with two other earthquakes recorded on this date in 1985 and 2017.

Tsunami warnings have been issued after the earthquake is said to have rocked buildings in the state of Michoacan.

Local journalist Jared Olson spoke of the earthquake from Cuauhtehmoc, saying that an elderly lady had "passed out" as people rushed out of buildings.

He wrote: "It was just swinging really hard, glass falling, where I am in Cuauhtehmoc. The only injury I've seen is an elderly woman who passed out while people rushed out of buildings."

One user replying to his tweet wrote: "Centred on the west coast. Felt strong in Guadalajara."

The earthquake is the third in recent history to rock Mexico on September 19, with a 7.1 magnitude earthquake hitting the country on this day in 2017.

Mexico City Mayor Claudia Sheinbaum, tweeted that there were no reports of damage and that she was currently in conference with the emergency committee.

Another recorded incident on September 19 dates back to 1985, when an earthquake with an 8.1 magnitude hit, with the Mercalli intensity scale recording it as "IX (Violent)".

Thousands were said to have been killed in the 1985 earthquake, while more than 250 people were reported dead in the 2017 quake.

The scale would currently list the 7.1 magnitude earthquake that just hit the south-southeast of Mexico as a "severe" to "violent" earthquake.