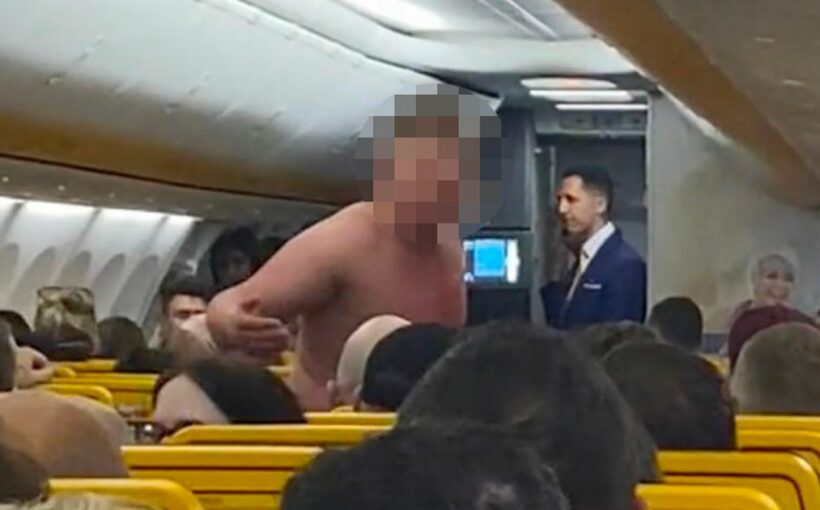 A topless man was spotted launching a foul-mouthed rant at passengers before he was removed from a Ryanair plane.

Video emerged on TikTok on Saturday (May 28) showing a half-naked man shouting at the passengers as they are waiting for the plane to take off at Edinburgh Airport in Scotland.

He stands in the aisle and argues with a man, saying: "I'm not disrespect, I'm not a disrespectful person.

In another clip, two Ryanair crew members try to intervene and persuades a fellow passenger not to interact with the unruly man.

The passenger in dark navy cap is seen making gestures and the man shouts at him: "What? What? What?"

A Ryanair spokesperson said: "The crew of this flight from Edinburgh to Malta (May 28) called ahead for police assistance on arrival after a passenger became disruptive inflight.

"The aircraft landed normally, and police removed this passenger before the remainder of the passengers safely disembarked the aircraft."

This came after a couple flying out to Bologna, Italy were left with no clothes for a wedding due to baggage chaos.

Charlotte Dunn and Mark departed from Manchester Airport at 9.10am on Saturday (May 28) and realised their luggage didn't arrive with them.

They told Daily Star: "We arrived in Bologna from a Ryanair flight departed from Manchester at 9.10 on Saturday morning. At 6pm we arrived at our villa.

“Unfortunately Ryanair failed to load over twenty suitcases onto our aeroplane therefore we are now without our luggage.

“Arriving for a wedding on Sunday afternoon we had the clothes we were wearing from the flight, no sun cream, no toiletries, no clothes other than what we are wearing, no phone chargers, no shoes, no underwear and no idea where our luggage currently is."

Meanwhile, Brit holidaymakers going on holidays have been facing a swathe of cancellations and delays from airliners as long queues formed at airports.

EasyJet alone has cancelled over 200 flights, while holidaymakers are reporting being stuck in hours-long queues as airports struggle to cope due to staff shortages amongst other factors.