Five Nashville-area officers were fired for allegedly having sex on duty with a female cop who also took her top off at a ‘Girls Gone Wild’ hot tub party.

Patrol officer Maegan Hall of La Vergne Police Department is at the forefront of the investigation after it was revealed in December that she ‘engaged in a sexual relationship’ with at least four male officers.

Fellow patrol officers Juan Lugo-Perez, Lewis Powell, detective Seneca Shields and Sgt. Henry Ty McGowan admitted to the accusations, according to the report, with Shields claiming he had oral sex with Hall in the department’s gym while on duty.

Hall, who is married, is also accused of revealing her breast while at a steamy Memorial Day boat party with Patrol Officer Patrick Magliocco, who was suspended, and fellow officers David Durham and Eric Staats.

‘Magliocco said that Staats, himself, Durham and Hall were in the hot tub when Hall’s top came off’ before the two went off to have sex in the bathroom, the report reads. 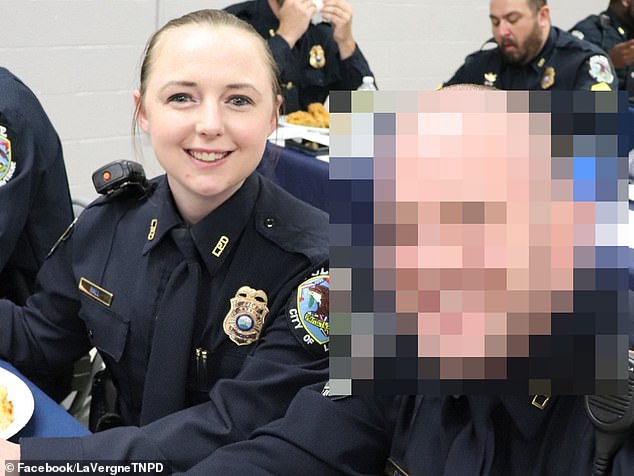 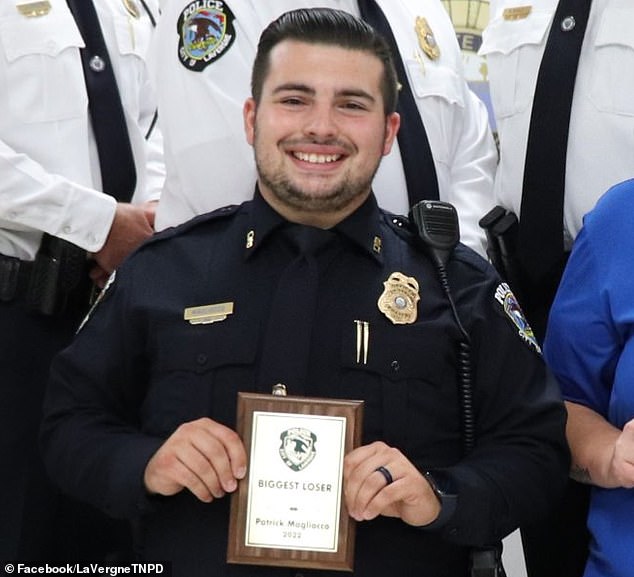 Patrol Officer Patrick Magliocco, who was suspended, admitted to having sex with Hall on multiple occasions. Magliocco claimed he and his wife were in an open relationship with Hall

The steamy hot tub party was hosted on Staats’ boat where Magliocco was seen pouring vodka down Hall’s throat moments before she took off her top.

The report reads that ‘Hall’s top came off and Staats helped put it back on because “he was trying to protect her.”‘

Hall then pulled Magliocco into the restroom and asked if he ‘wanted to f***’ and then later gave him oral sex when they got off the boat.

Hall was open about her relationships with the other officers and once bragged to Magliocco about Officer Powell’s d*** after performing oral sex on him while on duty, according to the report.

Durham and Staats claimed they didn’t have an inappropriate relationship with Hall.

Powell, who is married, denied having a sexual relationship with Hall several times and claimed that ‘everybody knows she has multiple partners.’ He later confessed. 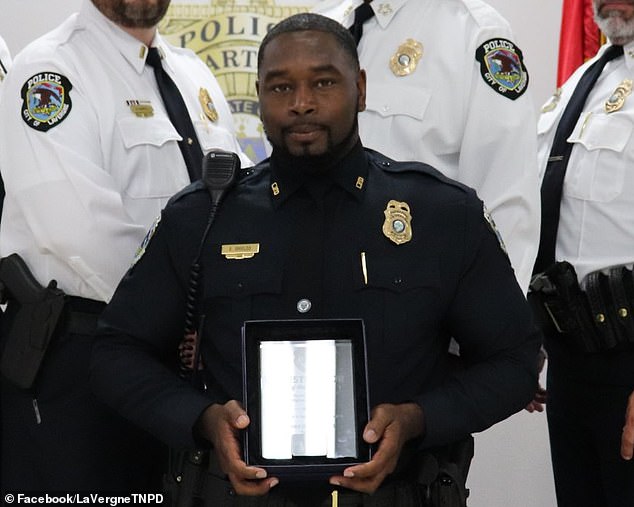 Detective Seneca Shields, who was fired, admitted to having oral sex with Hall in the department’s gym while on duty

Lewis Powell was also fired after denying he was sexually involved with Powell. Investigators were told Hall performed oral sex on him while on duty. He later confessed to the allegations

Magilocco told investigators on December 13 that he and his wife had an open relationship with Hall since spring 2022.

He revealed that one day Hall’s husband walked in on her and his wife and wasn’t on board with the open relationship.

‘At one party, Hall and Magliocco’s wife started kissing and Hall’s husband came in the room and seemed upset,’ the report reads.

Hall appeared to keep her sexual relationships a secret from her husband and asked other officers to borrow money to book hotels.

Magilocco told investigators that he was concerned for Hall’s mental health since she became heavily intoxicated at his house party in early December and drove home ‘drunk.’

‘Hall voiced “harmful thoughts” and on multiple occasions said that she should not be alone,’ the report reads.

Magilocco reported his concerns to the department on December 8. 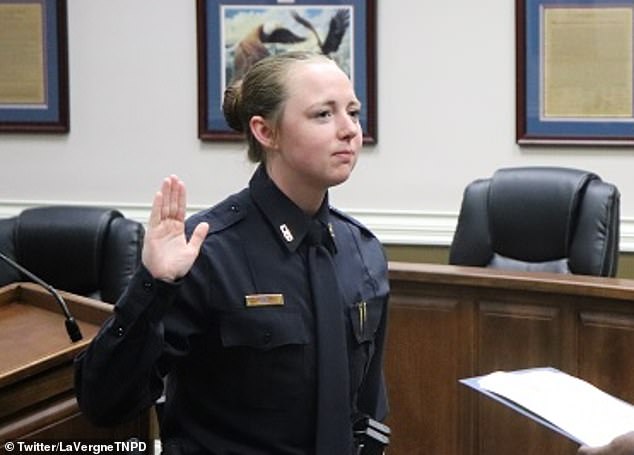 Fellow officers were concerned for Hall’s mental health. On one occasion, Hall expressed her ‘harmful thoughts’ and drove home intoxicated

Hall appeared to be somewhat open about her mental health and told Officer Holladay, who was also suspended for sending explicit images, that she had ‘bad days.’

Holladay told investigators that he once invited Hall and other officers to his home to watch football and there was ‘heavy drinking.’

The officer admitted to having a sexual relationship with Hall and meeting her in hotel rooms for sex. Their last encounter was in mid-November. 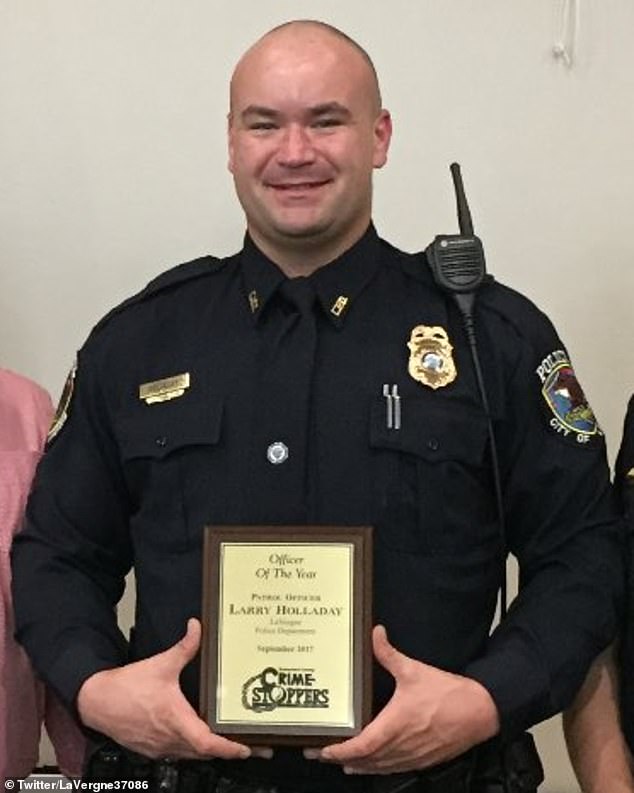 K-9 Officer Larry Holladay was also suspended for having an off-duty sexual relationship with Hall. The two would meet at hotels or at his home

Before Hall was officially hired on the force, she had met up at Officer McGowan’s house with her husband and another female.

At the time, Hall was a candidate and had taken her clothes off along with the other female.

‘Hall’s husband got upset,’ the report reads. ‘During that visit, McGowan admitted to taking out his penis with Hall in the room and taking a photo of it. He sent that photo to Hall.’

McGowan denied having sex with Hall but revealed explicit photos and videos he received from her.

Another employee revealed McGowan approached her while on duty and choked her.

He was terminated amid the sexual engagement and workplace violence allegations. 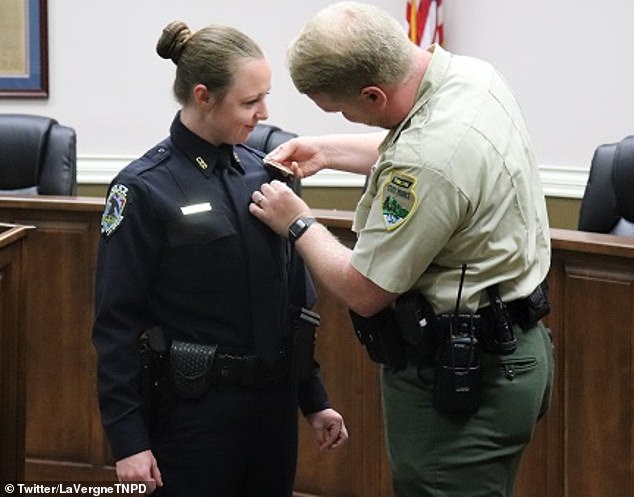 Before Hall was officially hired on the force, she had met up at an officer’s house and had a meeting while naked 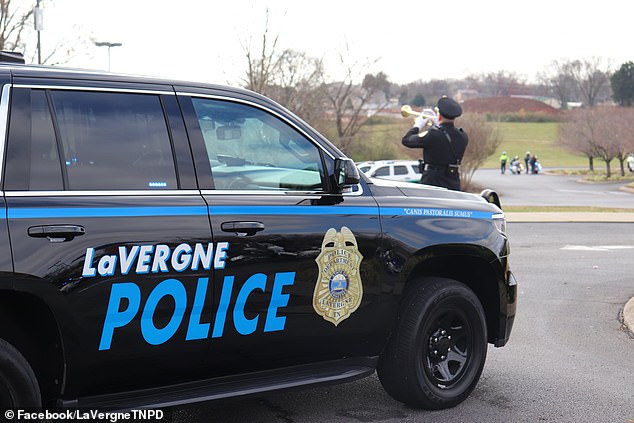 Hall initially denied having a sexual relationship with all the men except for Holladay, which she insisted was only at his house or in hotels.

But she admitted to ‘sending nude images to other officers on shift including Holladay, Magliocco, and Officer Schoeberl.’

She later backtracked her claims and confessed about Magliocco but denied being involved with his wife.

Hall also confirmed having sexual relations with Lugo-Perez and Powell.

Hall also confirmed having sexual relations with Lugo-Perez (above). He confessed to having sex with Hall and sending explicit images

Lugo-Perez initially denied the claims to investigators but later admitted he had sex with Hall while at the Go Cart USA in Murfreesboro. He also confessed to sending and receiving nude images with Hall.

Hall confessed to an ongoing relationship with McGowan despite his pushback and denial.

It’s unclear if any of the officers will appeal.