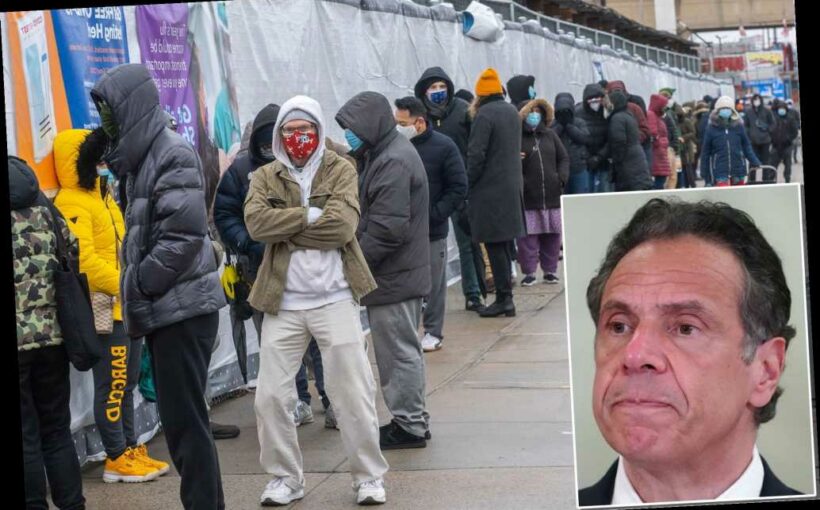 Andrew Cuomo’s JCOPE jig may be up

A top state physician who was tasked with solving coronavirus testing issues at nursing homes facilities in the early stages of the pandemic made several hours-long visits to CNN host Chris Cuomo’s Hamptons house to test him for the virus, according to a new report.

Around the same time, Kenneth Cole — the fashion designer who is married to the Gov. Andrew Cuomo’s sister — received preferential coronavirus testing at a state-run facility.

Those stories were among a number of new details revealed by the Washington Post about the VIP treatment for coronavirus testing overseen by Gov. Andrew Cuomo.

Seven people with firsthand knowledge of the alleged favoritism — who spoke anonymously out of fear of retribution from the governor —detailed the preferential treatment to the newspaper.

In March of 2020, testing cases were fast tracked at state facilities for people described as “priorities,” “specials,” “inner circle” or “criticals,” multiple sources told the newspaper.

At one of the state’s first pandemic operations hubs, more than 100 of the cases were kept in a database separate from the general public, according to the report.

Kenneth Cole, the fashion designer who is married to the governor’s sister, was one person who benefited from priority testing, the article said.

A top state doctor — Westchester County-based Department of Health physician Eleanor Adams — was dispatched several times to Southampton to test Chris Cuomo, who contracted the virus about a year ago, multiple sources told the paper.

In other instances, medical staff were reportedly sent from a coronavirus operations center hub in New Rochelle to test people in Cuomo’s orbit at private homes and hotel rooms.

One nurse said the practice made her very uncomfortable.

“I’m trained that there is no such thing as a preferential medicine. We don’t say, ‘this person is more important so their results are more important.’ That’s just not fair,” the nurse, who worked at two state-run testing sites, told The Washington Post.

“We would always hear, ‘This is coming from the governor’s chamber.’ What the hell does that mean?” the nurse added.

Another nurse told the paper there was a frantic effort to test Cuomo’s family members and send their samples to a state lab in Albany via state troopers for immediate results.

“And they would say, ‘have the state trooper ready … have it ready to go to Wadsworth.’ There was a lot of anxiety over those samples getting to the right place.”

“The word was ‘priority’,” one nurse said, according to the article. “They would say, ‘We have a priority at 10:00, a priority at 11:00.’ I can’t say that I know that they were all important to the governor, but that is what we were told.”

“They were treated like royalty,” the nurse said. “I didn’t understand why they were able to jump the line.”

The VIP tests were given to people, “who had the resources and educational wherewithal,” to see private doctors, one source told the newspaper.

“There is no reason why state testing teams should have been diverted to these people,” that person reportedly said.

The revelations in the article were rebuked by Albany officials.

“There was no ‘VIP’ program as the Washington Post describes — when priority was given, it was to nurses, guardsmen, state workers and other government officials central to the pandemic response and those they were in direct contact with, as well as individuals believed to have been exposed to COVID who had the capability to spread it further and impact vital operations,” Cuomo spokesman Rich Azzopardi told the paper.

When asked specifically about the allegations of favorable treatment to the governor’s family Azzopardi reportedly said: “To the extent this occurred, the Governor was not aware.”

“From a public health perspective ‘where have you been,’ and ‘how many people might you have exposed’ are the questions that guided who was given priority — not ‘who you know,’ ” New York Department of Health spokesman Gary Holmes told the newspaper.

Beau Duffy, a spokesman for the New York State Police, told The Washington Post that “thousands” of samples were transported to Albany — the only processing center in the early days of the pandemic.

“I’m not sure there were specific records kept,” about special requests, Duffy reportedly said.

James is investigating a slew of alleged sexual harassment accusations against the Democrat, as federal officials probe an alleged Albany cover up of COVID-19 nursing home deaths.

An ongoing impeachment inquiry in the legislature is addressing the alleged testing impropriety in addition to the other scandals circling the governor.

Cuomo has resisted calls to resign from leading lawmakers of his own party in both Albany and Washington.