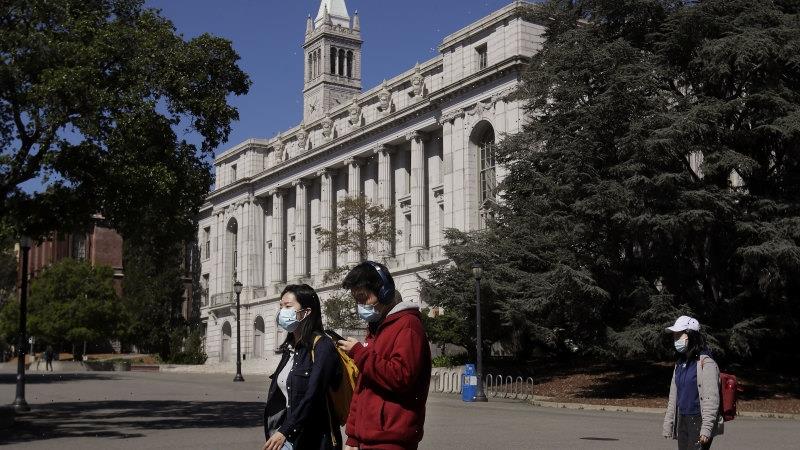 Los Angeles: The University of California will require proof of COVID-19 vaccinations before the start of the next term for all students, faculty and others, becoming the United States’ largest public university to mandate the vaccines even though they don’t have full federal approval.

As the highly contagious Delta variant spreads among younger people across the US, unvaccinated students without approved exemptions will be barred from in-person classes, events and campus facilities, including housing — and not all classes will be offered online, according to a University of California memo outlining the mandate. Physical distancing and mask wearing are expected to continue. 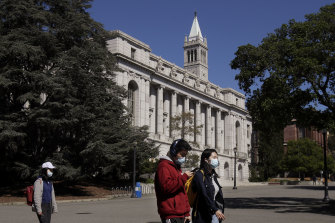 People walk past Wheeler Hall on the University of California campus in Berkeley, California.Credit:AP

“Vaccination is by far the most effective way to prevent severe disease and death after exposure to the virus and to reduce spread of the disease to those who are not able, or not yet eligible, to receive the vaccine,” UC President Michael Drake said in a letter to 10 chancellors.

He said the final policy was the product of consultation with the university’s infectious disease experts and ongoing review of evidence from medical studies on the dangers of COVID-19 and emerging variants. University officials also assessed the safety and effectiveness of the vaccines for preventing infection, hospitalisations and deaths from COVID-19, and for reducing its spread.

California State University is still hashing out its requirements and currently plans to mandate vaccinations only after the US Food and Drug Administration gives full approval to at least one of the vaccines – all vaccines currently have emergency approval only. The Los Angeles Community College District also is encouraging, but not requiring vaccinations for students, faculty and staff.

The differing policies among three California public higher education institutions, which collectively educate more than 1 million students, underscores the continued uncertainty around campus health and safety protocols at colleges across the US. In addition, questions remain over whether public educational institutions have the legal right to require inoculations with vaccines that have not received full federal approval.

The debate has raged across higher education nationwide, as campuses take different stands on those legal issues and some students have filed lawsuits over them. More than 580 institutions have announced mandates, according to a Chronicle of Higher Education tracker, including more than 60 in California, such as the University of Southern California, California Institute of Technology, Stanford, Occidental, Chapman, Pepperdine and the Claremont Colleges.

But UC is one of the few public university systems to impose the mandate even if the vaccines remain under emergency use authorisation.

Exemptions will be allowed based on medical, religious and disability grounds, along with deferrals due to pregnancy. Proof of vaccination or requests for exemptions must be submitted no later than two weeks before the first day of term.

But legal questions remain. In New York, for instance, Governor Andrew Cuomo has said mandates must wait for full FDA approval, a position adopted by both the state and city university systems. The Los Angeles Community College District has reached a similar conclusion.

“You cannot legally make people take an ‘emergency vaccine’, which is why there are no laws passed at the federal or state levels to mandate COVID-19 vaccines,” said William Boyer, the district spokesman.

UC officials say they believe they have the right to impose a mandate.

Some argue that students are still free to refuse vaccinations — although, under the UC policy, they would then be barred from entering any campus facility, including housing and classrooms, unless they have approved exemptions.

A vaccine mandate under emergency use authorisation could also be seen to undermine an individual’s federal right of refusal, if educational benefits or employment rights would be adversely affected. A legal advisory note by Mark LeForestier, California Community Colleges general counsel, said mandating doses could trigger lawsuits alleging that the institutions are facilitating unlawful human experimentation.

Three Chico State students have sued the California State University system, arguing that a potential vaccine mandate will violate their constitutional rights to liberty by depriving them of “bodily autonomy” to refuse a vaccine they consider dangerous.

The American Council on Education, which represents more than 1700 colleges and universities, issued a brief in March saying that courts would likely uphold the right of institutions to mandate COVID-19 vaccines in line with existing flu vaccination requirements. A California court last year declined to halt UC’s flu vaccination mandate, saying a long list of previous cases had upheld such requirements.

Dorit Rubinstein Reiss, a professor at the University of California, Hastings College of the Law, noted that students can refuse the vaccination and universities are not obligated to accommodate them because higher education is not a right, unlike K-12 education.

“It’s the university’s job to provide a safe campus and a vaccine mandate will increase campus safety,” she said. “It’s the right thing to do.”

The number of younger people who have remained unvaccinated has been a cause for concern in California and across the country. In Los Angeles County, health officials said Saturday that 83 per cent of 1094 newly reported cases were among people under the age of 50. Residents ages 18 to 49 account for 70 per cent of those cases.

State health officials could not immediately say how many people ages 18 to 22 have been vaccinated. But campus incentive programs targeting students to get the vaccine have been launched throughout the state. The growing need even prompted the Biden administration to turn to 18-year-old singer and actor Olivia Rodrigo to assist in urging younger people to get vaccinated through her social media platforms.