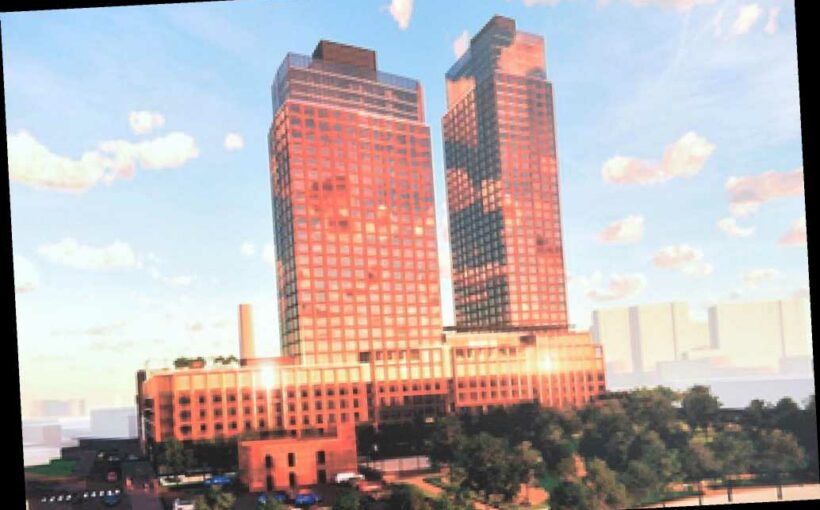 Amazon to spend $2 billion on affordable housing in three regions

A chance to save the South Street Seaport’s historic character

De Blasio reverses position, will block towers from going up near Brooklyn landmark

A city bureaucrat made a $6 million mistake in preparing documents for a deal with a developer — and it could jack up the intended rents on more than 100 “affordable” apartments, one of Mayor de Blasio’s signature issues.

The city included the wrong document in an agreement with a developer on a massive, $386 million waterfront development in Brooklyn, according to court records. And now he has a legal loophole he can drive a truck through.

Developer David Bistricer, who is building 770 apartments in three towers on Commercial Street in Greenpoint, has allegedly refused to let the clerical error be corrected, forcing the city to file a Manhattan Supreme Court lawsuit to fix it.

The project, part of a building boom in Greenpoint, was announced nearly a decade ago but only recently broke ground.

The city claims it negotiated the inclusion of 200 permanent affordable housing units in exchange for $2 million in taxpayer cash and $8 million worth of air rights from a city-owned plot adjacent to Bistricer’s Waterview at Greenpoint LLC site. The developer is slated to build Box Street Park on the plot, which is currently used by the MTA.

The deal was supposed to give the city housing with “deeper affordability,” and allowed Waterview to more than double the square footage. That increased affordability is “valued at more than $6 million,” the city said in its legal filing.

As the city and Waterview hashed out final details of the agreement in May, a staffer with the Department of Housing and Preservation Development included an incorrect list of affordable rents and qualifying incomes to be offered to tenants.

For example, the city intended for at least 10 of the affordable units to rent for as little as $732 to $1,067 depending on size. But the lowest rent listed in the faulty document is $1,529, court records show.

No one at HPD realized the “erroneous” document would “fundamentally – and without discussion or negotiation between the parties — alter the parties’ agreement,” the city said in court papers.

The problematic paperwork was discovered in July, but Bistricer allegedly tried to weasel out of a re-do by claiming the city had failed to provide promised financing for the project, according to the lawsuit.

The city claims it wasn’t contractually obligated to provide financing.

“The city fights for affordable housing. Period. We look forward to winning this case and delivering for families in need,” said HPD spokesman Anthony Proia.

Bistricer told The Post that the city failed to deliver “all incentives agreed to” for the project, which is currently under construction, and has failed to boot the MTA from the land intended for the park.

“We are hopeful of an early out of court resolution and a successful Box Street Park construction,” he said.

City Comptroller Scott Stringer pushed both sides to “work toward a solution that delivers the housing we need and ensures this never happens again.

“At a time when the need for housing is growing, it is unconscionable that a combination of incompetence and greed may deprive New Yorkers of desperately needed affordable housing,” he told The Post.