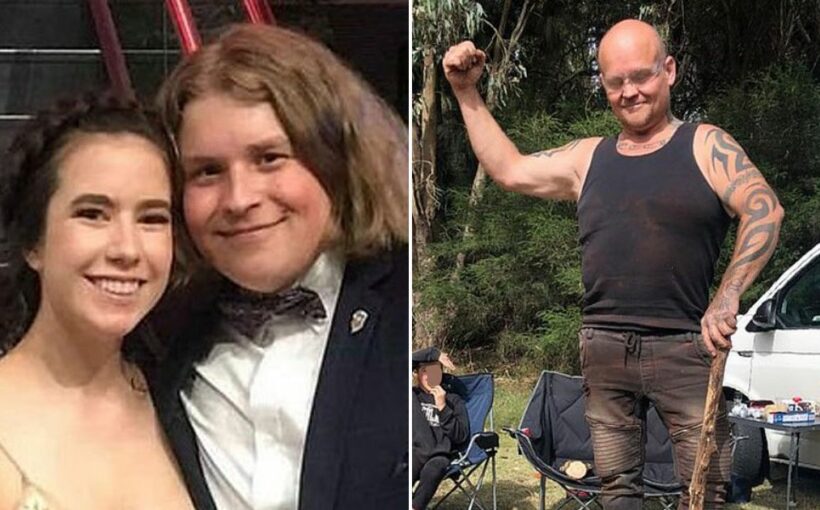 They were a couple described by loved ones as soulmates who were going to make a real difference in the world.

Everyone thought Lukasz Klosowski and girlfriend Chelsea Ireland, both 19, were perfect together.

They had been best friends before things blossomed into romance and after dating for a few years, they were both enjoying their first year at university.

Lukasz, known for his warmth and humour, was studying journalism at the University of South Australia and working part-time at KFC. Chelsea was doing a mechanical engineering degree at Adelaide University and working at a local bakery.

Chelsea was passionate about environmental issues and volunteered at a charity for vulnerable kids. She was driven to help others and with Lukasz by her side, they made a truly formidable team.

They also loved to travel together and went on many adventures, including trips to explore Lukasz’s Polish heritage.

While Chelsea lived with her parents, Lukasz’s parents had separated and he lived with his mum, Magda Pearce. For a while, he was estranged from his father, Pawel Klosowski.

But after Klosowski married second wife Monica, he reconnected with his son – although their relationship was strained. Klosowski was a heavy drinker and in the past he’d called his son “stubborn” for simply wanting to make his own way in life.

On 22 August 2020, Klosowski invited Lukasz for a family barbecue at his rural home in Mount McIntyre, four hours south east of Adelaide. Chelsea didn’t want to go due to the tensions, but she wanted to support Lukasz so she joined him.

That morning, Chelsea’s parents told her to make sure Lukasz drove carefully. She told them she knew he would – he always protected her.

The couple arrived and joined Klosowski, his wife and his three young stepchildren. But it wasn’t long before an argument broke out.

Klosowski had got through a lot of beer and was drunk. At one point, Chelsea messaged friends to say the evening had “gone to s**t” and that Lukasz was crying.

Klosowski and Lukasz had argued about Lukasz’s intention to move out of his mum’s place. For some reason, Klosowski saw this as disrespectful. Upset and overwhelmed, Lukasz wept – and Klosowski berated his son for crying like “a little baby”. It was late at night and the atmosphere turned hostile.

Klosowski demanded his son and girlfriend leave – but then he fetched his gun. Lukasz ran to a bedroom, where his father shot him twice in the chest.

Terrified, Chelsea fled to a bathroom with her mobile and locked the door. She called the police and begged them to come, as Klosowski was angry and drunk and she was certain her boyfriend was in terrible danger.

Outside the bathroom, crazed Klosowski reloaded his gun and fired through the door. His second shot was delivered at close range to Chelsea’s chest and the teen lay bleeding in the bathtub.

Klosowski’s rampage terrified his young stepchildren, who fled to an alcove in the back of the property. After the shootings, he said to his wife, “I think I shot my son. Can you go and have a look?”

When the police arrived, Klosowski was sitting with his gun on his lap. Paramedics found Lukasz face down on a bed. Chelsea was in the bath with the phone she had desperately used to call for help. They were both pronounced dead at 12.40am.

There was an outpouring of grief for the young couple. Their last moments were unthinkable, especially as they had died at the hands of a family member.

In November, Klosowski pleaded guilty to double murder. Because he admitted his guilt early, he was entitled to a reduction of up to 40% on his non-parole jail period.

In April this year, Klosowski faced sentencing. As the 46-year-old made a short statement to the court, the families of both victims showed their solidarity and left the courtroom so they didn’t have to hear it.

Klosowski said he’d thought about what he’d done every day and apologised.

“I acted like a monster,” he said. “The world would be a better place if I had shot myself instead. They were two wonderful people who were clearly destined to live happy. I destroyed the lives of their family and many other people.”

But the prosecution said the apology was “too little, too late”.

They said the shootings were the consequence of a row between Lukasz and his dad, adding, “The offending came about due to the insulting of the defendant’s pride. And it was fuelled by the combination of two fatal causes – anger and alcohol.”

Klosowski’s defence told the court that while he couldn’t explain his actions, he admitted his intention was to kill. “The prisoner accepts the horror of his behaviour,” his lawyer said.

There were 22 emotional victim impact statements. Chelsea’s dad Greg said he’d had his best friend stolen from him and the final moments of his daughter and her boyfriend haunted him.

“They had nowhere to hide and nowhere to escape,” he said. “Her last moments, knowing she was about to be shot, must have been horrendous beyond imagination.”

Chelsea’s mother Debra said, “I feel so fragile, so broken, like I’m constantly teetering on the edge. I feel like I’m living in some horror story.”

Chelsea’s sister Maddie told Klosowski he would “rot in the fiery pits of Hell” and that he would never know true happiness. “You didn’t deserve Lukasz,” she added.

Lukasz’s mother said the killings were an act of “twisted evil” and Klosowski would forever be remembered as a murderer.

The judge, Justice Anne Bampton, acknowledged that reports had shown Klosowski suffered from anger management problems and alcohol addiction. But she added that it didn’t excuse his actions and Klosowski’s irrational behaviour had escalated and turned violent.

“Your conduct was deliberate and purposeful,” she said. Justice Bampton’s voice wavered at the sentencing, as she’d clearly felt the impact of the emotional stories shared about the young couple.

“The anguish and heart-wrenching pain your offending has brought on Lukasz’s mother, stepfather and little brother, Chelsea’s mother, father and sister, their extended families and their friends is profound,” she said.

“I cannot do justice to the raw emotion of the victim impact statements. It’s clear Lukasz and Chelsea’s legacy is that they made the world a better place for their families and those whose lives they touched.

“It is to be hoped the love and joy for life they had will give their families and friends the strength they need to find peace.”

The killer will be in his eighties before he is considered for release.

Outside the court, Greg read a statement on behalf of both families. “We will never understand why this happened and will spend the rest of our lives grieving and asking why,” he said.

“Today marks the end of one incredibly difficult chapter. Tomorrow we’ll continue with a more difficult task of learning to live without Chelsea and Lukasz.”

Lukasz and Chelsea had hoped to live a happy life together and help change the world. Tragically, their dreams were ended by the brute who had given Lukasz life.