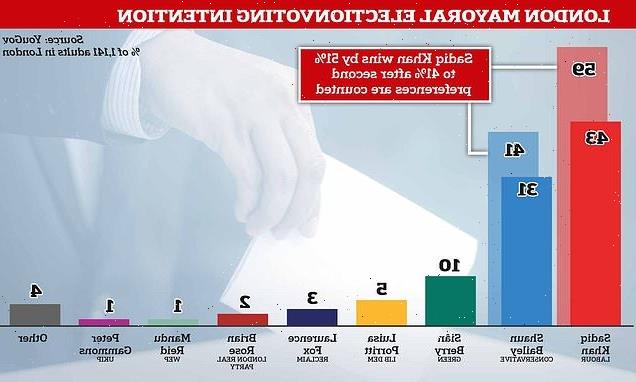 The London mayoral race has tightened ahead of polling day tomorrow, with a new survey giving Sadiq Khan a 12 point lead over Tory rival Shaun Bailey.

YouGov’s final poll before the capital votes puts the Labour incumbent on 43 per cent in the first round.

That is down four points on last month while Mr Bailey is up one point to 31 per cent.

The numbers suggest Mr Khan is on course to win the contest in a second round run-off with Mr Bailey by 59 per cent to 41 per cent.

Overall, Mr Khan’s lead over Mr Bailey has fallen from 19 points to 12 points.

A separate survey conducted by Opinium suggested that the capital’s violent crime crisis could prevent Mr Khan from winning a majority in the first round with a majority of Londoners of the view that knife crime is getting worse. 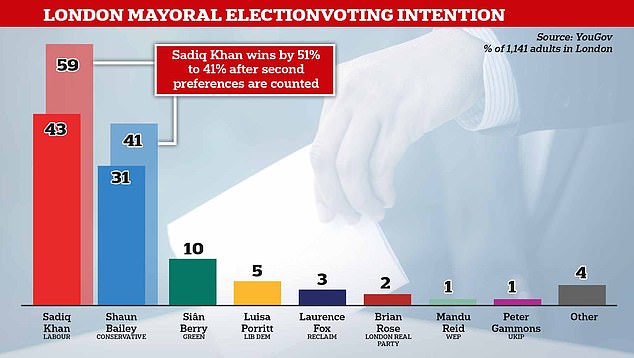 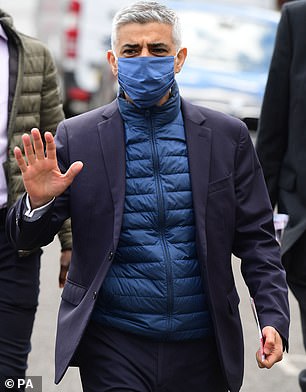 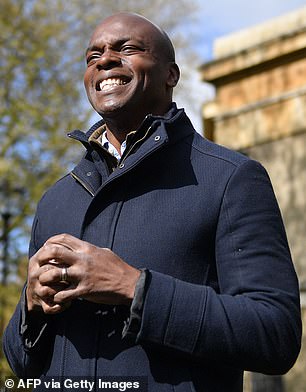 Some 23 per cent of 2019 Tory voters in the capital in April said they did not know who they would vote for but that number has now dropped to 13 per cent.

The London mayoral election uses a supplementary vote system with a candidate required to secure more than 50 per cent of the vote to win.

If no candidate is able to get past 50 per cent in the first round, the top two candidates then progress to a head-to-head run off, with second preference votes from the eliminated candidates then counted.

The YouGov survey puts Green candidate Sian Berry on 10 per cent, Lib Dem Luisa Porritt on five per cent, Reclaim’s Laurence Fox on three per cent, Brian Rose from the London Real Party on two per cent, WEP’s Mandu Reid on one per cent and Ukip’s Peter Gammons on one per cent.

A Labour source told Politico that the YouGov survey ‘reflects our internal polling which shows a similarly reduced lead’.

The source said that because of a combination of ‘complacency about the result and Covid’ the party is ‘expecting a considerably worse night than many pundits have predicted’.

A senior ally of Mr Khan told MailOnline that they did not believe the polls were taking into account apathy among Labour voters.

‘We genuinely think it is closer than that because of turnouts,’ they said.

But a senior London Tory described the claims as a ‘laughable’ attempt by Labour to encourage their voters to turn out.

The YouGov survey found that 46 per cent of Londoners believe Mr Khan has done a good job during his first term while 42 per cent believe he has done a bad job.

Some 41 per cent of Londoners believe Mr Khan has been a better mayor than his predecessor Boris Johnson while 32 per cent believe he has been worse. 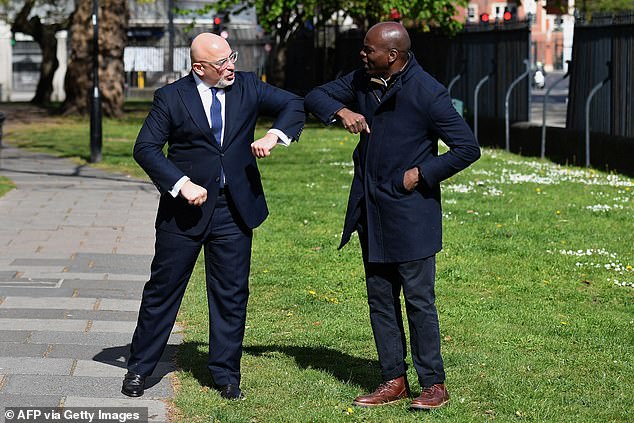 A separate Opinium survey for the Evening Standard suggested Mr Khan could end up with 48 per cent in the first round with Mr Bailey on 29 per cent.

The Labour mayor could then get 63 per cent in the second round run-off with Mr Bailey receiving 37 per cent.

The poll found that crime is the most important issue for Londoners as they prepare to vote.

On the specific issue of knife crime, some 64 per cent of people said they believed the situation is getting worse while 11 per cent said it is getting better.