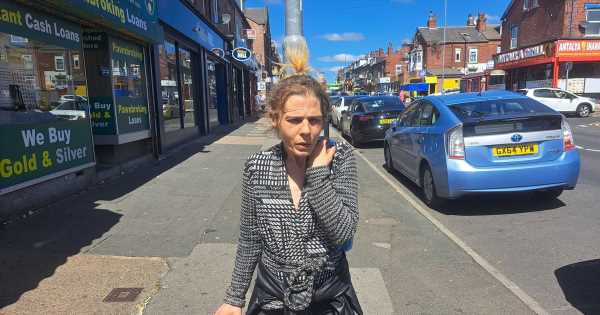 A former prostitute who is addicted to heroin and crack cocaine has hit out at those who look down on her.

Tracey Whelan, a pregnant mum of two from Chapeltown, Leeds, left her home in Harehills to start a new life and escape drugs.

However, Tracey claims that instead, she found herself trapped by the bustling city suburb, and was forced to beg for money.

The 42-year-old has hit out, stating she is sick of the bullying, the insults and those who belittle her for her 26-year-long addiction.

She told the MEN that she first started to use drugs as a prostitute, just trying to make ends meet. Tracey said: “They call me a crackhead, dirty s*** and a smackhead. I’m in agony. You shouldn’t judge people, it’s not right. I don’t bother anyone.”

The middle-aged mum moved away from Leeds and has mothered two children, eight and 26.

Tracey said: “I used to live in Harehills but I moved away to get away from the drugs. I’ve got two kids and I’m pregnant now.”

Keep up to date with all the latest news stories. by signing up for one of Daily Star's free newsletters here.

Harehills has been described as a “holiday resort” for street drinkers by West Yorkshire Police, who are committed to cracking down on anti-social behaviour after being granted increased powers to take action in the area.

The former prostitute said: “I don’t drink, it’s disgusting. They’re falling all over and causing trouble. I take heroin and crack, I’ve been addicted for years – 26 years.

“I got involved with bad people, prostitutes, and people like that. I used to do it myself, in Harehills and Chapeltown.”