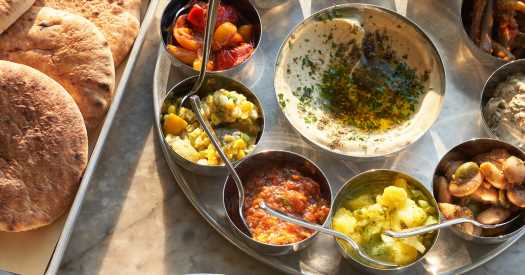 At Michael Solomonov’s homage to Israel’s meat-skewer joints, skyline selfies are normal and salad is mandatory.

A platter of dips, pickles and salads has become Laser Wolf’s signature.Credit…Adam Friedlander for The New York Times

It’s hard to imagine anybody who will be disappointed by the new Brooklyn restaurant Laser Wolf except, of course, people who are under the impression that there will be actual lasers and wolves.

The name is a joke about the Lazar Wolf character from the musical “Fiddler on the Roof.” He’s a Jewish butcher, and Laser Wolf specializes in grilled skewers of meat. So: butcher, meat. Lazar, Laser.

It must have seemed like a good idea to the restaurateurs who came up with it, the chef Michael Solomonov and his business partner, Steven Cook. The two of them run more than 20 restaurants in Philadelphia. Each in its own way explores the food of Israel, where Mr. Solomonov was born, where he first cooked in restaurants and where he has found his sense of purpose and many of his ideas since 2003, when his brother was killed by a sniper while was on patrol with his Israeli Army unit. Even his fast-casual chain for American fried chicken and doughnuts sells, from time to time, a Tel Aviv chicken sandwich dressed with tahini, za’atar, zhug and chopped Israeli pickles. 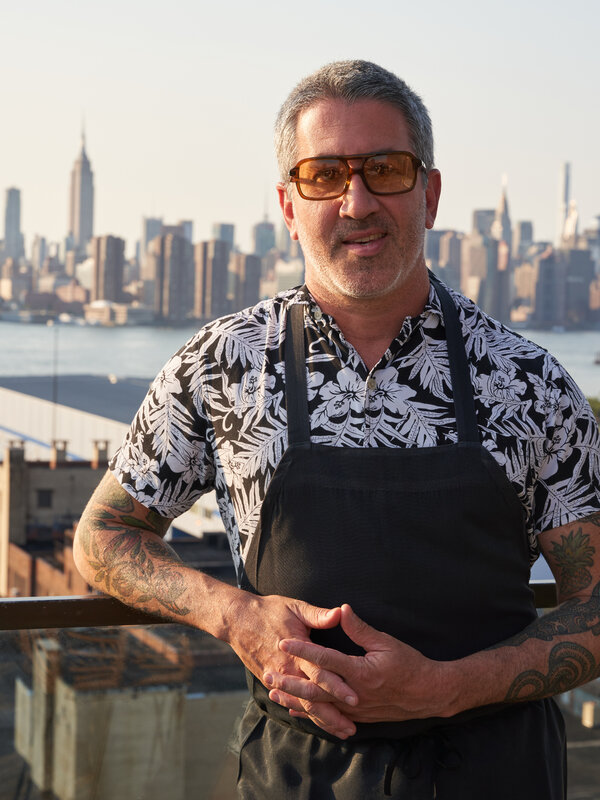 If you look at the menus from all of Mr. Solomonov’s places, you can see him painting an Israeli landscape that tries to take in the many and far-flung influences on the country’s cooking. It’s a sweeping picture, but the details are granular: The hummus at his Philadelphia restaurant Zahav, probably the greatest I’ve ever tasted, suggests an intimate understanding of the chickpea.

With Laser Wolf, he adds a shipudiya to the scenery. Unfancy and fast-moving joints, shipudyas specialize, at least ostensibly, in meat and fish grilled over charcoal. For many Israelis, though, the skewers are less the point of a shipudiya than its salatim, small dishes of dips and pickles and salads that arrive right away and quickly cover the table like cards at a Texas hold ’em game.

The Laser Wolf in Brooklyn is on the highest floor of the Hoxton, Williamsburg. To get there, you walk through the hotel’s lobby, full of cream-colored furniture and white ceramic tchotchkes, where Mr. Solomonov’s restaurant group will be opening a cafe and bakery this fall. Then you take a special elevator to the top and walk out on what is essentially a big porch. You’re practically outside, although they unroll sheets of clear plastic to keep the rain out and some kind of barrier against the winter cold is on its way. At some point, almost everybody there takes a selfie with Manhattan in the background.

When the wind is right you can smell the charcoal burning in the long grill just behind the counter. The menu, borrowed from the Laser Wolf in Philadelphia, is organized around the skewers; the prices vary but they’re all in the neighborhood of $50, without tax or tip, for a single skewer along with the salatim and dessert.

The skewers are probably more carefully considered, from the raw ingredients to the seasonings, than at your average Jerusalem shipudiya. The steak, clearly dry-aged and intricately marbled, is better than most cookout steaks. The chicken skewer is excellent, too, sweet from its guava marinade and sour on top from crushed sumac.

The koobideh is like a hamburger on a stick, part beef and part lamb. A little stiff and underseasoned, it made me think longingly about the juicy and tender koobideh at another new restaurant in Brooklyn, Eyval.

Laser Wolf also grills a whole trout. It’s OK, but if I were eating seafood at Laser Wolf I’d go straight for the tuna skewer. Fresh tuna is rolled around in caraway seeds, crushed coriander other spices before it’s seared over charcoal for just a minute and dressed with a crunchy, oily harissa.

The best main course, though, may be the grilled eggplant; it’s certainly the most eventful. Soft and smoky inside, tart on the outside from a pickled-mango powder that tastes a little like sour gummy worms, it’s served under a whole salad: fried garlic chips, pickled peppers, grilled cherry tomatoes from the grill and a lot of fresh dill. You mix all of this up with tahini and wonder why more eggplants don’t end up this way.

Still, the salatim are still the best part of the meal. (They are also meatless and fish-free, so a vegan could make a meal out of the grilled eggplant or cauliflower.) There’s baba ghanouj, smokier even than the grilled eggplant. There are gigante beans as big as your thumb, a fresh slaw of shaved fennel and cabbage, and another salad — pickled celery and pineapple — that is weird but also kind of great. I am not sure why the so-called Turkish tomatoes were so cold and slippery, but the pickled green tomatoes were terrifically crisp, like a new fall apple.

A lot of the salatim are spicy, but they’re spicy in different ways so monotony never sets in. Some seem to be original and others are straight out of Israel and the region around it, like the spicy green olives mixed with long, skinny pickled cucumbers. Each one is arranged on a tray around a dish of hummus that’s so similar to the one at Zahav that I would find them impossible to tell apart if the Laser Wolf version weren’t dusted with za’atar, plus a pool of olive oil that’s large enough for a neon tetra or two to swim around in. And of course there is pita, tall, tender and served hot enough to scald your fingertips.

Despite all the excellence in the skewer and salad departments, despite having a menu with only one or two disappointments, dinner at Laser Wolf does not quite feel like a feast, and the people on the rooftops of other hotels along Wythe Avenue seem to be having more fun.

The long, cramped layout is a fine space for sunset cocktails but an awkward one for a meal that involves a lot of reaching and is supposed to evoke abundance. I doubt Mr. Solomonov and Mr. Cook would have chosen a similar space in Philadelphia for the original Laser Wolf. But I wonder too if the format of the meal isn’t too rigid. Instead of covering the table, the salatim are as neatly arranged as a dentist’s tools, and when the main courses arrive they’re stacked above the salads on a pizza tray. And if you want to order more than a single skewer — would that be a crazy thing to want, at a skewer restaurant? — nothing on the menu suggests you can, or tells you what it would cost. You have to ask.

For what you do get, though, the meal works out to be a decent deal. At the end they bring you a soft-serve sundae. If you eat out in New York often enough, you have probably had enough soft-serve sundaes to last the rest of your life. But this one, a tiny cup of ice cream with sour cherries, tiny crispy dots and a sesame sauce that hardens into a brittle shell, is exactly right for this restaurant. You’re immersed in the flavors of the Middle East for a sweet minute, and then it’s time to ride the elevator back to Brooklyn.