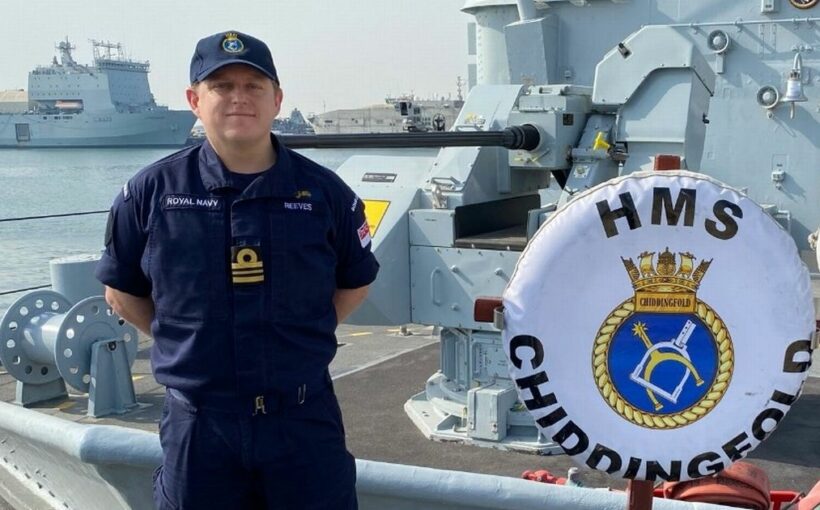 A Royal Navy captain has reportedly smashed a hole in his warship, costing £100,000 in damage.

Lieutenant Commander Simon Reeves was attempting to dock the HMS Chiddingfold in the dark for the first time on March 16.

However, as he tried to parallel park he crashed into another vessel, HMS Penzance, two times resulting in a hole through the warship’s hull.

HMS Chiddingfold, known as ‘Cheery Chid’, will be out of commission for months while it undergoes serious repairs, sources have said.

A source told the Sun: “He slammed her into reverse, but it was too late. Chiddingfold’s side hit HMS Penzance.

“She swung out and hit her again.”

The impacts are said to have caused two deafening bangs as they tore a hole in the 685-ton HMS Chiddingfold’s plastic hull.

Lieutenant commander Reeves had only taken over the Hunt-class minesweeper at the UK naval base in Bahrain less than a week before the accident occurred.

He lives in Hampshire with his wife and two young children and joined the Royal Navy as a welfare officer in 2006.

A Navy official blamed the incident on “wind, tide and equipment failure”.

The Royal Navy recently announced it would be deploying high-tech warships to fight a secret Russian navy nuclear submarine known as Losharik.

The craft would be able to destroy or tap into the undersea cables responsible for 97% of worldwide communications and carrying trillions of foals worth of international financial transfers. There's MUCH more where that came from! Want all the jaw-dropping stories from the world of showbiz and up to the minute news from TV and soaps?

Well, we've got you covered with our showbiz, TV and soaps newsletters – they'll drop straight into your inbox and you can unsubscribe whenever you like.

We'll bring you the inside track from telly expert Ed Gleave and soap specialist Sasha Morris. Oh, and your daily fix of Piers, Katie Price, Demi Rose and all your other Daily Star favs.

The Telegraph reports that the Ministry of Defence will be bringing in a new Multi Role Ocean Surveillance ship (MROSS) to counter this threat by 2024.

According to the MoD, MROSS will be equipped "with advanced sensors and will carry a number of remotely operated and autonomous undersea drones which will collect data” and will "be able to support with other defence tasks, including exercises and operations in the Arctic which will become an increasingly contested area”.