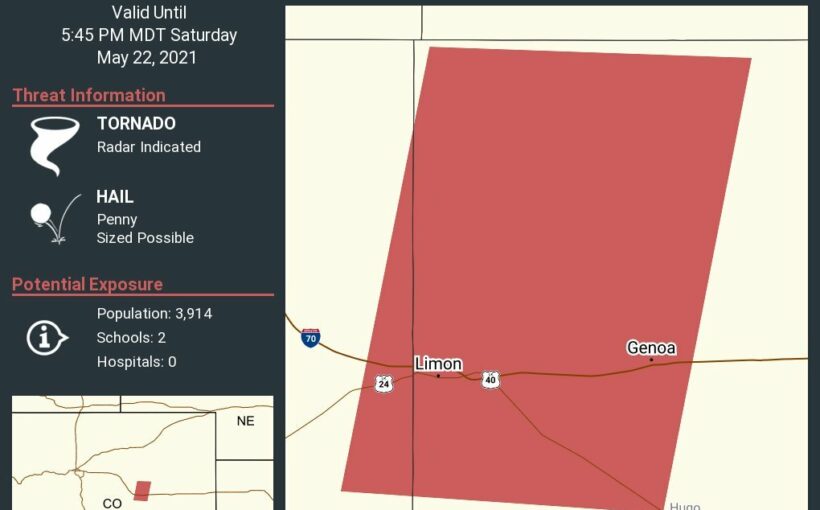 Severe weather rumbled across the Eastern Plains of Colorado on Saturday afternoon, with about six tornadoes touching down, one just east of Denver, and hail pummeling several areas including just east of Parker.

The weather and thunderstorms caused delays at Denver International Airport for departing flights of up to one hour and 45 minutes, said Mindy Crane, an airport spokesperson. Inbound flights, about 30, were diverted and held up part of the afternoon, until at least 4:40 p.m., as a severe storm, with heavy rains, passed over the airport. DIA bound flights were diverted to Grand Junction, Albuquerque and Salt Lake before they resumed on to Denver.

The National Weather Service, just after noon, issued a tornado watch for a widespread area of the Eastern Plains and the Front Range, including the Denver-metro area. The watch lasted until 8 p.m. and it included Adams, Arapahoe, Denver, Douglas, El  Paso, Pueblo and Weld Counties.

One tornado, and isolated cell, landed briefly at about 2 p.m. just south of Bennett, said David Barjenbruch, a meteorologist NWS in Boulder. Clusters of tornadoes touched down elsewhere further east, including south of Brush and Fort Morgan.

At about 4:40 p.m. a tornado touched down about 12 miles west of Hugo, or 13 miles south of Limon. It was moving north at 35 mph. The brief Bennett twister, as of about 5 p.m., was the closest tornado to Denver. Saturday stormy weather was moving in a pattern from south to north, northeast.

“We’ve had quite a few tornado touchdowns,” Barjenbruch said. Most were in open areas and there were no immediate reports of damage.

“So far it has been in pretty remote areas,” Barjenbruch said. “There are farms and small towns out there, we’re trying to keep everyone safe.”

Large hail pounded several areas, including ping-pong ball size hail (an inch and 1/2 in diameter)  east of Brush and in an area east of DIA, Barjenbruch said. One-inch diameter hail blasted and area about two miles east of the Pinery in Douglas County. Stormy weather was expected into the night.

A deep low-pressure system over the Great Basin, southwest of Colorado, fueled the severe weather Saturday, Barjenbruch said. On Sunday, Denver should be sunny, seasonal and drier,  but the Eastern Plains, especially the extreme east along the state line, will likely see another rounds of storms with more hail and possible tornadoes.