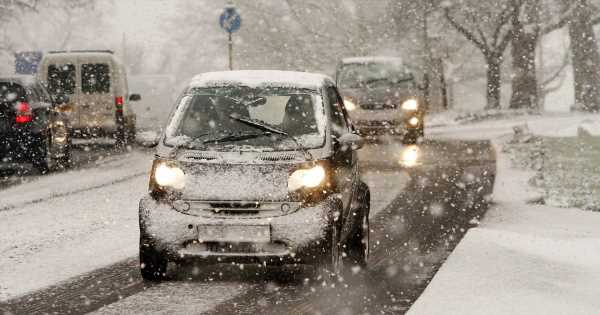 Britain is forecast to see its first snow fall of the season as temperatures dip in the coming week.

Maps from WXCharts show flurries will fall across the Highlands of Scotland, between Fort William and further north towards Inverness from early on Saturday morning.

Weather forecasters predict snow will fall from around midnight on Friday and continue during the following week.

READ MORE: US soldier describes 'utter chaos' of fighting in Ukraine was 'like a video game'

But for most Brits it is rain they will see, with much of next week dominated by "changeable" wet and windy weather according to the Met Office.

Met Office meteorologist Alex Deakin said: “What we look to be left with through next week is a similar pattern to what we’ve got now, with low pressure systems mostly to the north and areas of high pressure to the south and a reasonably active jet stream pushing everything along.”

The month of October is too early for any snowfall of note in most parts of the country.

But northern peaks and long-range forecasts from meteorologists now suggest we may be in for a chilly winter.

The official ECMWF long-range forecaster, Nick Finnis, wrote in his Netweather blog that the jet stream appears to be diverting further south for November, December and January – meaning the British Isles will be exposed to cold "polar air".

Warnings that temperatures are expected to cool from what was expected to be a warm month have also been issued.

To stay up to date with all the latest news, make sure you sign up to one of our newslettershere.

This, experts say is because the jet stream has been diverted bringing colder conditions.

"This would mean the jet stream and storm track diverted further south than average, leading to a greater chance than normal of colder spells for northern Europe, including the UK during November, December and January."

Flood warnings, meanwhile, have been issued with heavy rain and strong winds forecast for parts of the UK.

As autumn sets in, the Met Office has given flood warnings for the north of England and some forecasts predict snow in the week ahead.