Soldier, 37, who served in the Army for 20 years is thrown out of the military for sexually assaulting a female colleague at a Christmas party

A senior British Army soldier has been thrown out of the military for sexually assaulting a female colleague by grabbing her between the legs at a Christmas party.

Warrant Officer Adam Graham, 37, put his hand under the woman’s dress during a military function at a hotel.

Graham, a gunnery inspector with 4th Regiment Royal Artillery, was convicted of grabbing the female soldier in what was described as a ‘humiliating’ attack.

The 37-year-old – whose training, a military court heard, cost taxpayers hundreds of thousands of pounds – hung his head as he was dismissed from the service following a 20-year-career in which he served in Iraq. 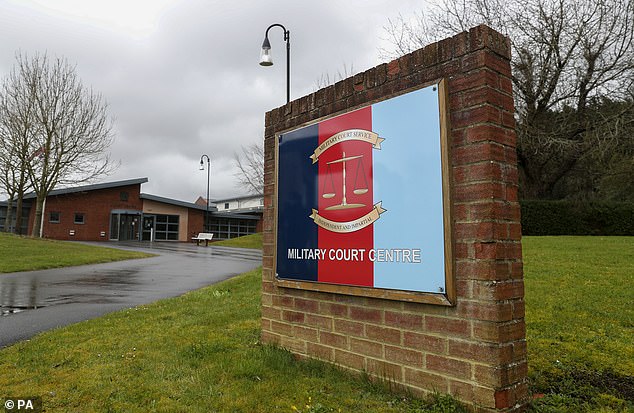 Lyndsey Zalkin, prosecuting, told Bulford Military Court in Wiltshire: ‘[Graham] was at a bar with the victim. He put his hand through the slit of her dress and grabbed her.

‘He took his hand out and he started making satisfied noises.’

The court heard that the victim described the assault as a ‘forceful grab’.

Graham denied a single count of sexual assault but was found guilty following a trial.

Sentencing him, Judge Andrew Smith said Graham, a divorced father-of-two, had behaved ‘disgracefully’ and added: ‘You deliberately sexually assaulted [her]. You grabbed her over her undershorts.

‘You then compounded the humiliation by withdrawing your hand…and then making what she called a ”satisfied noise”.

‘She was shocked and upset by what you did. She immediately complained to others. 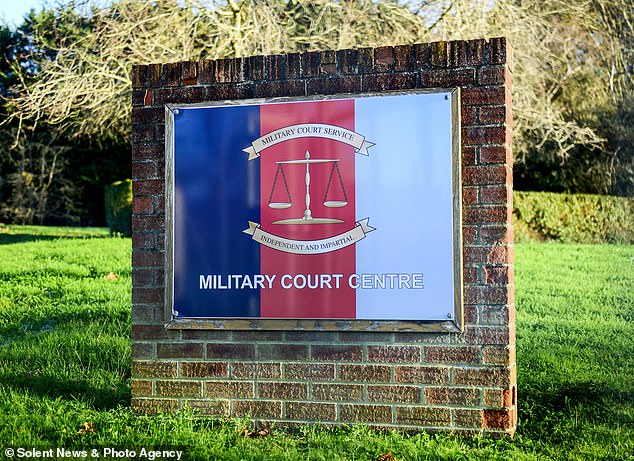 Graham, who was previously awarded medals for his service in Iraq and Afghanistan as well as the Long Service and Good Conduct Medal, was dismissed from the military after sexually assaulting his colleague

‘She didn’t want this to happen. She has nothing to gain by this. She reported you because it was the right thing to do.’

Mr Smith added: ‘We are at an absolute loss to know why you did this. There was no reason for you to have hostility towards her.’

Graham, who has undertaken many operational tours, was awarded medals for service in Iraq and Afghanistan as well as the Long Service and Good Conduct Medal.

The court heard that as a qualified gunnery inspector he held an elite role of responsibility in the Army.

Arguing that Graham should not be dismissed, lawyer Edward Hand said the cost of training a QGI is ‘potentially in the hundreds of thousands of pounds’.

Mr Hand said: ‘He will do anything to stay in the British Army. He will accept any restriction in the form of demotion or any other restriction.

‘If there is a possibility that he could continue as a serving soldier, he would seize it with both hands.’

But the court decided after ‘anxious consideration’ that the seriousness of the act meant that Graham had to lose his job – and undergo a two-year service community order including 90 days on an accredited sexual offenders programme.

Judge Smith said the evidence against Graham was ‘overwhelming’, despite a ‘bizarre conspiracy theory’ the soldier put forward to explain the accusation.

The judge said Graham had been respected by his colleagues and was technically accomplished, adding: ‘It seems to us that you were the go-to man in the regiment.

‘You’ve thrown it all away with this unexplainable action.

‘You refuse to accept you’ve done anything wrong. You can’t say that you’re remorseful.

‘Dismissal is the appropriate punishment.’