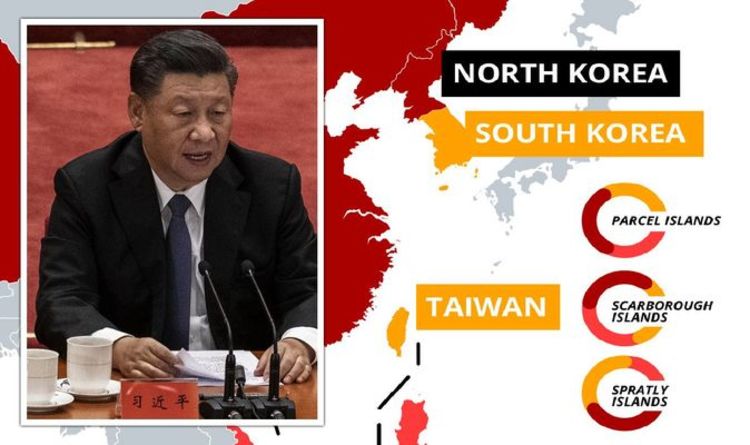 China has upped its offensive tactics in the South China Sea over the past fortnight, with an estimated 300 vessels from the country’s maritime militia patrolling the Spratly Islands, which lie off the coast of the Philippines, Malaysia and Vietnam. The act has been condemned by international leaders surrounding the hotly contested waters – but there appears to be little in the way of stopping China from getting its way.

Last week the Philippines condemned “in strongest terms” actions of three Chinese coast guard vessels that it said blocked and used water cannon on resupply boats headed toward a Philippine-occupied atoll in the South China Sea.

Philippine President Rodrigo Duterte also called on China to respect the 1982 United Nations Convention on the Law of the Sea, along with a 2016 Hague arbitration ruling that mostly invalidated China’s South China Sea claims.

However, China does not recognise this ruling.

Brunei, Malaysia, the Philippines, Taiwan and Vietnam have all laid claim to parts of the crucial shipping route – but China asserts it has rightful control of the whole area.

These other countries are backed by international powers like the US, which has long asserted that China has no legal grounds to impose its will on the region.

Despite recent moves, Mr Jinping said on Monday: “China resolutely opposes hegemonism and power politics, wishes to maintain friendly relations with its neighbours and jointly nurture lasting peace in the region and absolutely will not seek hegemony or even less, bully the small.”

The US issued a warning to China, saying it would invoke mutual defence commitments if the escalation continues.

Why does China want control of the South China Sea?

In short, the answer is control.

The South China Sea is home to vital shipping lanes and is critical in the future success of China’s Greater Bay Area economic development plans.

It’s also an avenue to Taiwan, which China wants to officially reunify with the mainland – something the US has said it is willing to defend Taiwan against.

Why are other countries worried about China?

For several years China has been building military bases on islands in the contested region, despite Mr Jinping saying his country will not seek to dominate South East Asia or bully its neighbours.

But its neighbours are savvy to the tactics used by China to dominate, control, and widen its expansionist regime.

China’s historical record since the formation of the People’s Republic of China in 1949 is clear: whenever it is confronted by a mounting threat, whether it be large or small, China is always the first to fire, using the advantage of surprise rather than waiting to be attacked.

Previous conflicts such as the Korean War and disputes with Vietnam show China is not afraid of using brute force to teach a lesson to its neighbours.

And while China hasn’t fought a major war since 1979, the ongoing fear that China may attempt a forced reunification of Taiwan has resulted in international condemnation and reaction – most notably the recent creation of the AUKUS pact between the US, UK and Australia.

Countries that also lay claim to the South China Sea have ramped up their defences against China: Vietnam has expanded its air, naval, and coast guard forces; Taiwan has won the backing of the US, and the Philippines has bolstered its defence of disputed shoal in the South China Sea.

Elsewhere, dozens of countries are looking to cut China out of supply chains and the UK, France and Germany are sending warships to the region.