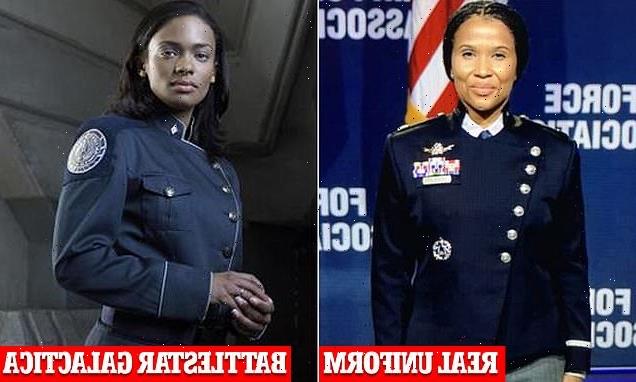 The US Space Force unveiled a new prototype for its dress uniform on Tuesday, which was immediately compared to outfits worn by soldiers in Battlestar Galactica,  Star Wars, Star Trek and other sci-fi classics.

Gen. John Raymond, commander of the Space Force, revealed the uniforms for the newest branch of the military during his speech at the Air Force Association’s Air, Space and Cyber conference.

The navy-blue uniform for  servicemembers – who are officially called Guardians – features a series of silver buttons running diagonally from the right shoulder down to the front of the guardian’s chest.

The name pin is on the left side of the uniform and the Space Force logo lies on the right side. A light blue collar is visible below the uniform.

But the new look was compared online to the outfits worn in sci-fi classics.

The uniform’s blue color, diagonal silver buttons and white trim are all reminiscent of the uniform worn by officers on classic sci-fi show Battlestar Galactica.

Others said the diagonal front of the Space Force dress uniform looks like those worn by the evil Empire in Star Wars.

It is not the first time the Space Force has been accused of ripping off ideas from sci fi.

The branch’s ‘delta’ logo has been compared to the Starfleet badge in Star Trek, while the name ‘guardian’ for servicemembers has been likened to Marvel’s Guardians of the Galaxy. 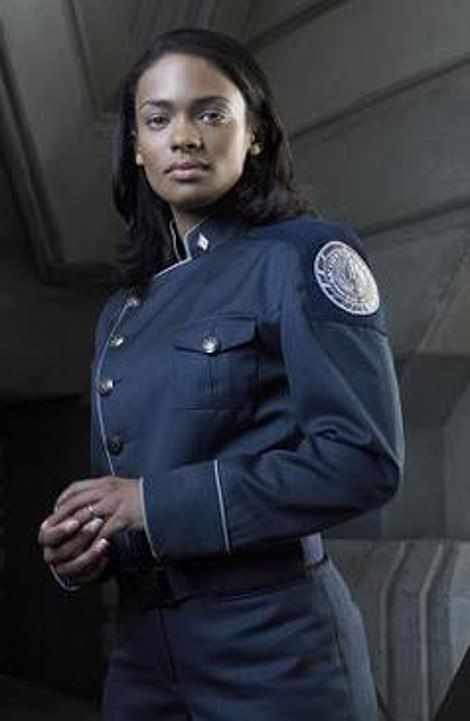 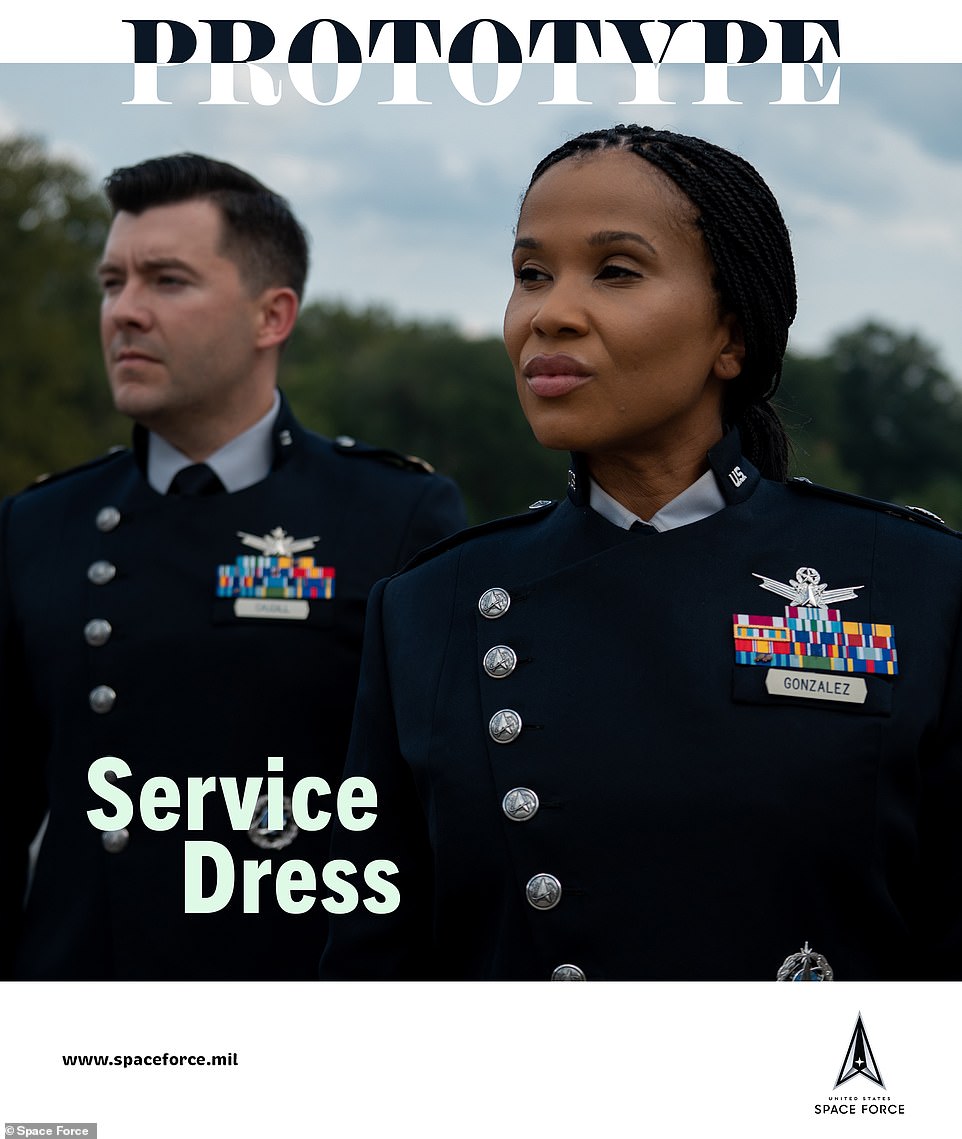 The US Space Force unveiled their new prototype uniforms on Tuesday 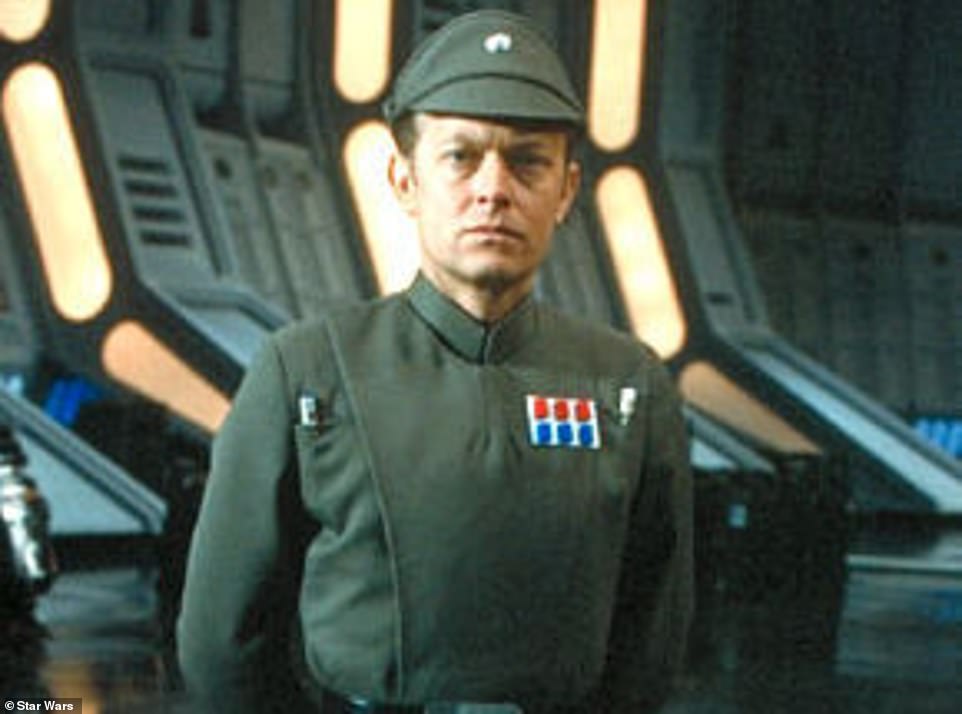 US Space Force officials described the new dress uniforms as ‘modern,’ distinctive,’ and professional,’ however  Twitter users were quick to point out the clear inspirations from science fiction that went into the uniform’s designs.

‘The Dress uniform looks unpractical with the diagonal buttons. All the other military uniforms allow for easy removal of the jacket.’

Others pointed out the uniforms similarities to Star Wars and Star Trek, with Peter Singer writing that the Space Force uniform is a mirrored version of the uniforms scene on Star Trek Enterprise.

Others joked that if the Space Force was going to ‘rip off’ sci-fi uniforms, they could steal the designs from the comedy Galaxy Quest or space horror film Alien.

Along with the prototype uniform, the agency announced it was testing its physical training uniform, which included a t-shirt and shorts featuring the logo.

Raymond said the agency will accept ‘comment and tweaks’ for the formal uniforms in the coming months before they go into wear testing, Air Force Magazine reported.

Despite its celestial nature of the command, Space Force appears to be using a traditional earth-tone camo pattern for its daily-use, utility uniform.

The uniform in the photo also showed off a United States Space Command patch and a full-color American flag.

President Donald Trump established the US Space Force in 2019 after signing the National Defense Authorization Act. It was the first new military service created since the US Air Force in 1947.

The US Space was established by President Donald Trump in 2019 and has continued to be developed with clear ‘inspirations’ from sci-fi classics.

Former Vice President Mike Pence announced on December 2020 that the Space Force members would be known as Guardians, which brings to mind Marvel’s Guardians of the Galaxy.

Then, in 2020, the Space Force announced its official logo, which looks a lot like the emblem for the Starfleet Command from Star Trek.

Trump was mocked on social media by those who pointed out the striking resemblance between the two insignia. 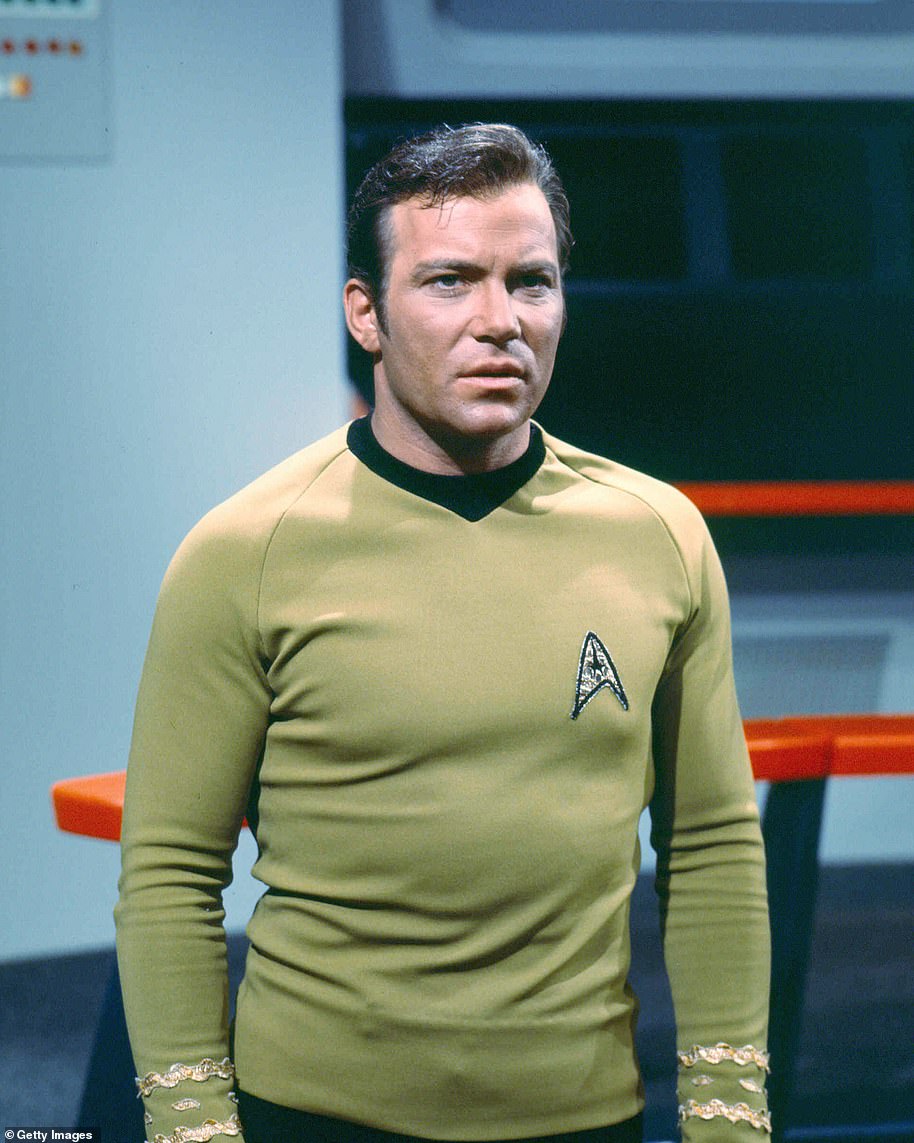 Star Trek was a television series that aired in the mid-1960s. It then evolved into a franchise that included films, animated series, theme parks, and exhibits. One of the earlier stars of the TV series, William Shatner, is seen above as Captain James T. Kirk in this 1968 file photo

George Takei (far right), who played Hikaru Sulu in the film Star Trek II: The Wrath of Khan, reacted on Twitter to the new logo 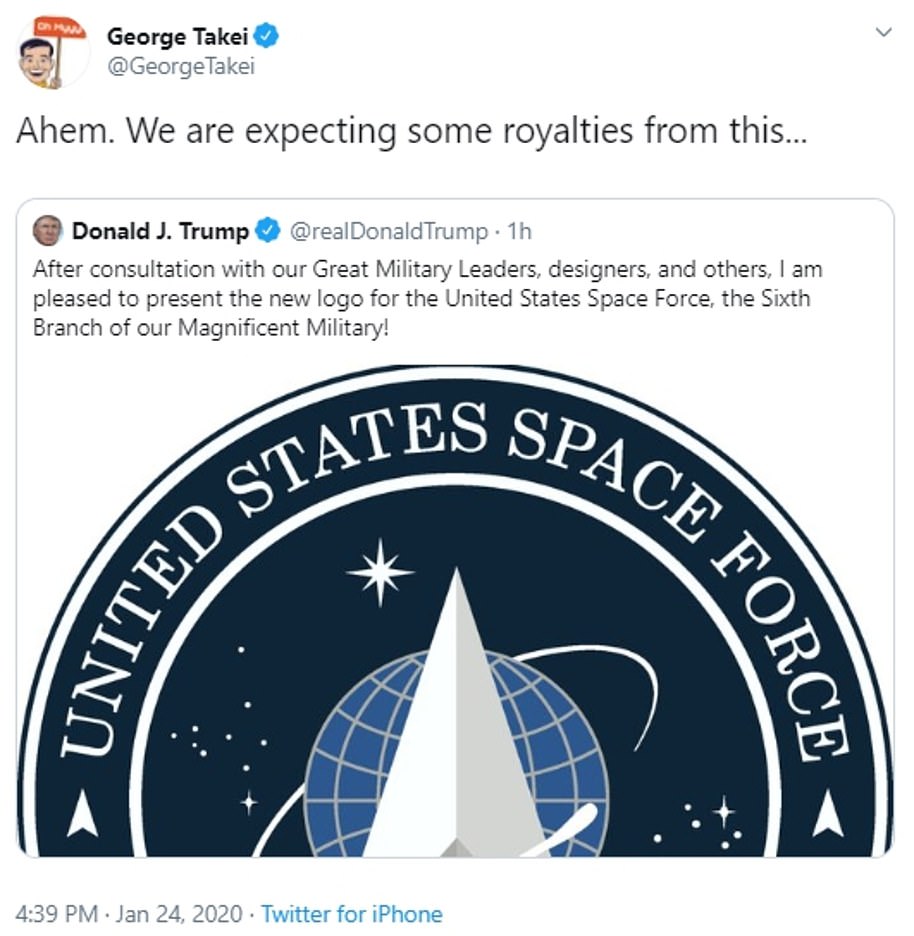 Takei, a frequent critic of Trump, tweeted: ‘Ahem. We are expecting some royalties from this..’

Star Trek actor George Takei joined in the ridicule tweeting, ‘We are expecting some royalties from this…’

On September 2021, the US Space Force showed off their first prototype uniforms, a navy suit that features a series of silver buttons running diagonally from the right shoulder down to the front of the guardian’s chest.

Like with the logo before, many were quick to point out the uniforms’ similarities to other suits worn by military in science fiction.

Another user with the handle name Melinda D wrote, ‘Since you’re going all sci-fi with this, why not rip off the Galaxy Quest costumes.’ 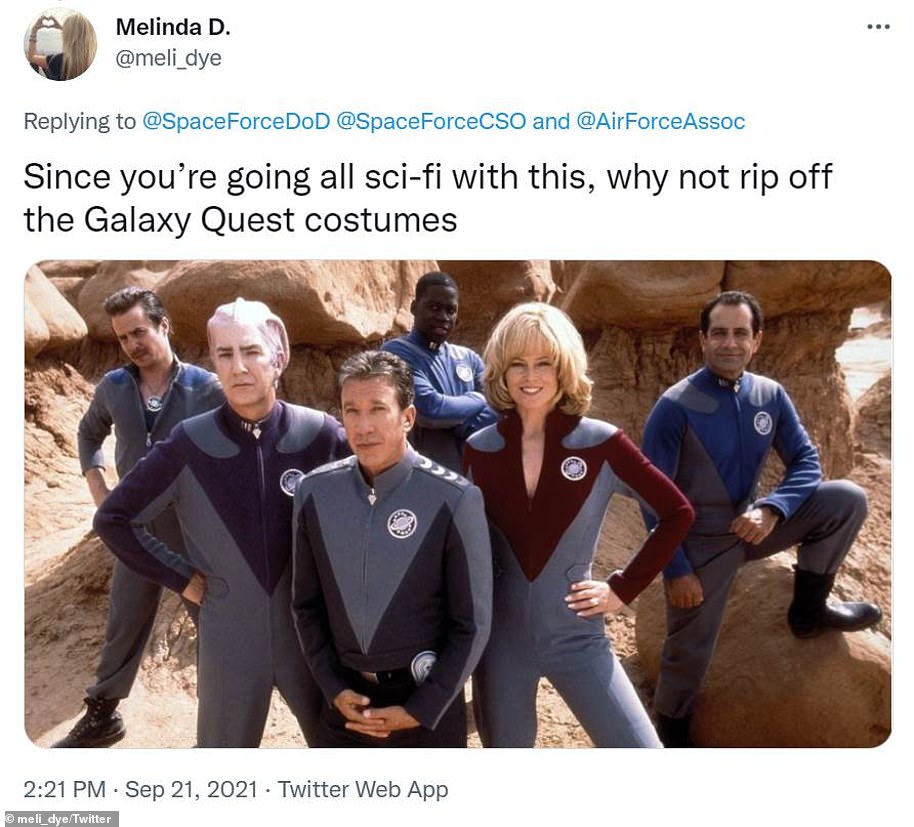 Others joked that the Space Force embrace other sci-fi uniforms