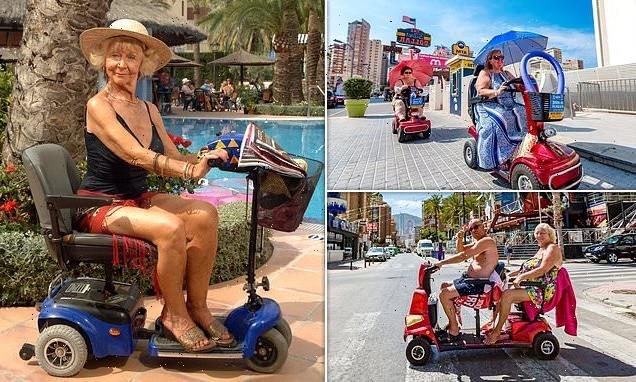 Spanish police in Benidorm are clamping down on the use of the holiday resort’s famous mobility scooters, with tourists facing fines of up to £425 for improper use.

Over the last few days, officers have been ramping up their checks on the scooters, made popular by the likes of Madge in hit TV show Benidorm. One couple were ordered to stop after being caught on a vehicle meant for just one person.

Council chiefs confirmed today police had been told to ‘intensify’ checks on the hire and use of the scooters, which are especially popular with the UK tourists and expats who have helped make Benidorm the Costa Blanca’s number one British resort. 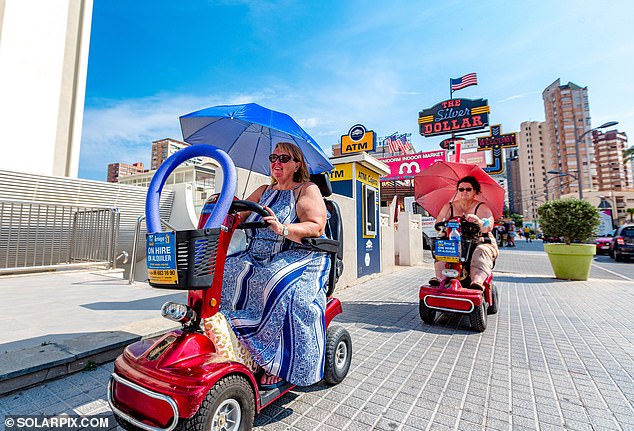 Spanish police in Benidorm are clamping down on the use of the holiday resort’s famous mobility scooters, with tourists facing fines of up to £425 for improper use

A council spokesman said: ‘A campaign has been launched to inform establishments that hire these vehicles to make sure they are complying with municipal by-laws and police officers are also keeping tabs on the people who are using them.

‘Some people go too fast or use them in places where they shouldn’t and that generates complaints from drivers and pedestrians.’

Council officials say they have met with representatives from campsites and hotel associations to make sure they play a role in informing tourists of their responsibilities on the scooters.

Serious breaches of the regulations attached to their use can carry a fine of up to 500 Euros (£425).

Mobility scooters are meant only for people above the age of 55 unless they have mobility problems. Only people with mobility problems can use them on pavements, and must go no faster than walking pace.

Elsewhere users have to stick to a top speed of just over 12 miles an hour, and helmets have to be worn at all times.

Jose Ramon Gonzalez de Zarate, Benidorm’s Councillor for Mobility, said: ‘We want to make sure these mobility scooters, which have become more popular in cities, don’t cause problems.’

As far back as a decade ago locals were complaining it was common to see groups of people in fancy dress on stag weekends careering around Benidorm.

Resort radio host Dave Rowland was quoted in 2013, before the introduction of new by-laws restricting their use, as saying: ‘I know of at least two occasions where people have driven straight through fixed glass panels while they were drunk, thinking in their impaired state that they were automatic doors.

‘There have also been times when people have got stuck trying to ride on the beach.’

A Benidorm Council spokesman admitted at the time the sitcom featuring Sheila Reid as Madge Harvey was to blame for the surge in popularity of the mobility scooters, saying: ‘There are definitely more mobility scooters on the streets because of the TV show.

‘We want to make sure they are used responsibly and for legitimate reasons. This has not always been the case.’