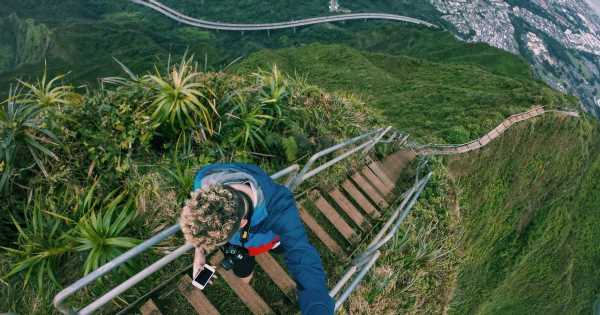 A famous walkway known as the Stairway to Heaven is set to be removed after tourists, Youtubers and thrillseekers illegally accessed the closed path.

The picturesque Haiku Stairs, on the island of Oahu in Hawaii, have been breached by vast numbers of people over the years despite them being closed almost 30 years ago.

A large number of videos have been posted on Youtube with users looking to capitalise on the unique structure and breathtaking views.

The stairway includes a staggering 3,922 steps that go through a 2,800ft mountain trail in Kaneohe.

The US Navy originally built the stairway in the 1940s to provide access to a communication facility.

CNN reports that locals say views from the apex of the stairway provide the best in all Hawaii as you head through the clouds.

However, no one has legally been able to access the stairway since they were closed off in 1987.

Since then tourists and thrillseekers have continued to trespass despite facing a maximum $1,000 fine for people caught accessing them.

A number of trespassers have also been injured with the latest case in April requiring the person to be airlifted.

Honolulu City Council members voted unanimously in September to remove the stairs due to the area being plagued by trespassers.

Speaking to HawaiiNewsNow, council member Ester Kiaaina said: “Due to rampant illegal trespassing, Haiku Stairs is a significant liability and expense for the city, and impacts the quality of life for nearby residents.”

The city has reportedly spent nearly $1 million in taxpayer dollars to remodel the stairs and hundreds of thousands of dollars in security costs.

However, a non-profit group called The Friends of Haiku Stairs is calling for the stairway to be reopened rather than removed.

The group held a rally to save the stairs before the council’s vote but failed to convince the council members.

Honolulu Mayor Rick Blangiardi is expected to approve the removal of the Haiku Stairs with a $1 million budget allocated.

The mayor has 60 days to make a final decision.

The Daily Star has contacted the Honolulu Board of Water Supply, which owns and manage the Haiku Stairs, for comment.