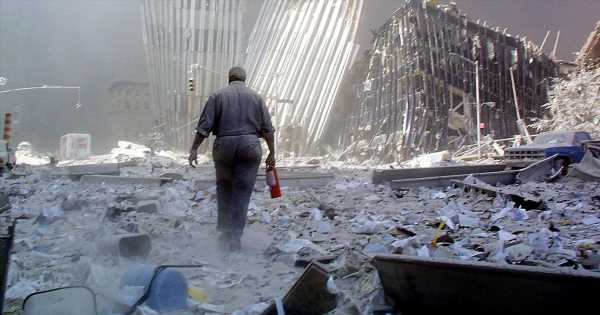 Members of US President George Bush’s team have described the apocalyptic scenes they were greeted with when they visited New York City days after the September 11 attacks brought down the Twin Towers.

In the moments after the first passenger jet hit the North Tower on the morning of 9/11, there were chaotic scenes as then-President George Bush was informed of the attack while visiting a classroom in Florida.

In BBC documentary, 9/11: Inside the President’s War Room, aides could be seen scrambling to get Bush to safety in Air Force One while they figured out what was happening in the Big Apple.

Speaking on the BBC documentary, Bush's counsellor Karen Hughes explained that it felt right that the President should visit the city in the aftermath of the horrific event.

However, Richard Kiel, a Bloomberg reporter who was accompanying the President, described the team’s horror at the apocalyptic scenes they were met with.

He recalled: "As we approached New York—probably five to eight miles out—the cabin of the helicopter became filled with this awful, awful smell.

“No one says a word and the pilot circles that pillar of smoke, and we can look down and see the rescue workers.

“Then we go over and we land down by Wall Street. We were the first group that had been down to ground Zero other than emergency services personnel. It was almost like Pompeii."

Giving testimony, President George Bush agreed, saying: "It was like going into hell. All your senses were pulsating negatively. There was fog. There was a sense of death."

This year marks the 20th anniversary of the attacks, when more than 2,900 people were killed after hijacked planes were flown into the North and South towers of the World Trade Centre.

A flight was also crashed into the Pentagon in Washington and a fourth crashed in a field in Pennsylvania, after the crew and passengers fought back against the terrorists to prevent it reaching its intended target of either the White House or Capitol Building.

One man living nearby to the Flight 93 crash site recently described the horrifying scene he was met with on the field.

To get more stories about the September 11 attacks from Daily Star delivered straight to your inbox sign up to one of our free newsletters here.