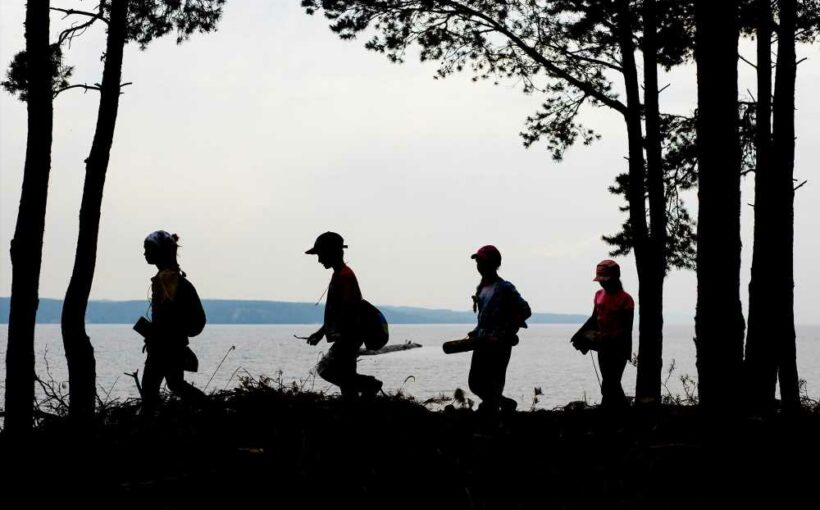 Mom shot, killed by husband after threatening to leave him

Minnesota woman allegedly shot ex in the head, buried him beneath shed

Mom allegedly shot dead by boyfriend in front of her kids

For moms who escaped domestic violence during the COVID-19 pandemic, the doldrums of summer hit just a little bit differently this year.

Finally free from the physical and mental torment that surged in households across the nation during unprecedented lockdown orders, moms are contending with a new problem while their kids are out of school: how do you heal and stabilize your life while being a full-time caretaker?

Met Council, a Big Apple non-profit that runs a family-violence program, is working to be part of the solution by offering all-expense paid trips to summer camp for the children of domestic abuse survivors.

“Summer is a time when there’s no school and for people who don’t have any extra finances, it’s an added stress, you know, they got to go to court, and they have to do all the things that they have to do to obtain safety,” Nechama Bakst, the senior director of the program, told The Post.

“But clients also have that stress of making sure the kids are safe and they’re not just like sitting around the TV all day.”

Met Council once gave out a few hundred bucks to families each summer to help subsidize a kid’s trip to sleepaway camp but they realized the benefits that came from a month away in one of Upstate New York’s many bucolic campgrounds, for both mom and child, was worth a complete scholarship.

This year, amid a surging client load that’s been increasing since last year when domestic abuse escalated during the pandemic, Met Council sent 5 kids to sleepaway camp at the cost of about $3,600 each — plus an extra $500 per kid for all of the necessary camp swag they’ll need.

Hannah, a Big Apple mother of five from the Orthodox Jewish community who escaped her abusive husband last year after the abuse got so bad, he nearly killed her, received three of those scholarships. The Post is using a pseudonym and withholding Hannah’s real name to protect her identity.

“We don’t have clothes, we don’t have so much things, but we going anyway, we don’t care and I was so happy for them, they start crying because really this is a treat that they thought they will never have. It’s something very special for kids to go to this program,” Hannah, who is in her 40s, told The Post of her kids’ reaction to hearing they’ll be going to sleepaway camp for a month.

“My kids was jumping in the house because all of their friends [are] going there and I always think ‘I can never [afford] it.’ The only thing I can do, I can take you to a playground and I can do for you, maybe pool outside with a small thing but no more than that.”

Hannah is one of many who saw violence increase in their household amid the COVID-19 pandemic, which was weaponized by domestic abusers and used as one more vehicle for control. Nationwide, the number of reported domestic violence incidents increased by at least 8.1 percent after lockdown orders went into effect, according to an analysis by the National Commission on COVID-19 and Criminal Justice released in February.

In the five boroughs, Met Council is handling more cases than they’ve ever seen in the history of their family-violence program and is also seeing increased rates of extreme violence involving weapons and rape. Between July 1, 2020 and June 30th of this year, Met Council’s client load jumped by about 27 percent and because the cases they’re working on are more complicated and egregious than years past, they’ve more than doubled the number of services they typically provide.

Hannah and her estranged husband both come from strict, religious backgrounds and the two married when she was just 19 years old. During their first year together, she noticed he had an “anger issue” that only got worse throughout a nearly 30-year long union.

“I said with the time, the kids will come and [he] will be softer. The time come and the abuse got worse,” Hannah recalled.

“I always talked to his family, try to see what they can do and everybody say, ‘No, you are the woman, you have to make it work.’… I said to myself, ‘if I have another kid, he will change, if I have a boy, he will change.’”

Hannah eventually had a son but the abuse just got worse and worse and also started being directed toward the children. Her husband used to beat them and even put a sign on the fridge saying no one was allowed to eat.

Finally, Hannah reached a “breaking point” last year when she said she “almost died” and managed to escape with help from Met Council.

While Hannah may now be safe from immediate physical harm, the lasting trauma that came from decades of domestic violence has been incredibly difficult to overcome. When she’s busy being a full-time mother, putting food on the table and dealing with life’s everyday mundanities, her healing often has to take the back burner.

“I always look strong next to them and I don’t get down, I try to show ‘No, mommy’s here, everything’s under control’… [I’m like] an automatic pilot, I do what I have to do,” Hannah explained.

“When I have a moment to myself, when everybody goes to sleep, that’s the time when I let myself go,” she said.

Luckily, Hannah got the break she sorely needed this summer when her kids were able to go to camp, which gave her permission to finally have some time for herself — guilt-free.

“I don’t have to be in the kitchen all day, make sure she’s eating, he’s eating, although I love it and thank God that I have it… but sometimes it’s okay to say ‘hey, I need help.’ It’s going to help me tremendously.”

While having the kids out of the house will be a reprieve for Hannah, it is just as beneficial to her children who’ll have the opportunity to finally “just be kids” for once, Bakst explained.

“A lot of our children unfortunately are exposed to a lot of violence and chaos and this is a time for them to just have fun… it’s not about whose parents are divorced or not divorced and who is hearing yelling at home and who’s not,” Bakst said.

“When children return home, they’re returning to either a new home or a safer environment where things are more stabilized so that they can start the school year off in kind of this safer, more stable way because the client had an opportunity to focus on what they needed to focus on and the child had the opportunity to also grow and flourish and develop themselves and build their own self esteem.”

Bakst said the mothers often use the time to work on their resume, take job training courses or work on figuring out complicated litigations for upcoming court battles, which allows them to shield their kids from some of the messier sides of starting over.

“When the kids come back, they’re coming back to a different parent in some way, you know, maybe a calmer parent more centered, has a plan for the future,” Bakst said.