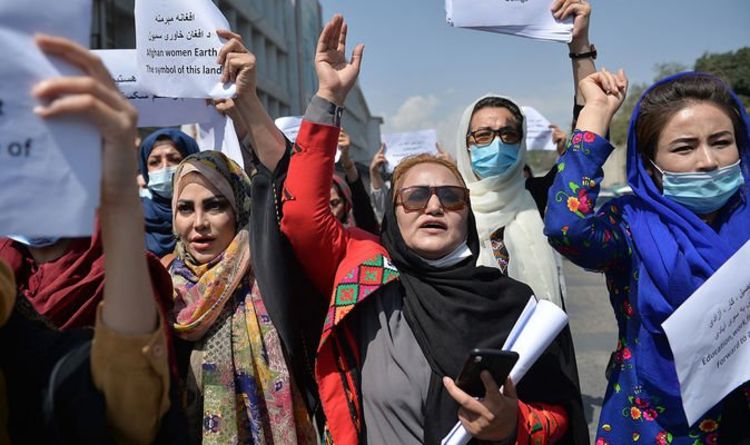 Taliban spokesman Zabihullah Mujahid claimed Beijing was “ready to invest in and reconstruct” Afghanistan as he gave the clearest indication to date of the group’s diplomatic priorities.

Mr Mujahid said the Chinese would revive Afghan copper mining and praised the One Belt One Road project despite criticism from western countries.

This comes after Foreign Secretary Dominic Raab declared that Britain would not be “recognising the Taliban at any time in the foreseeable future”.

Prime Minister Boris Johnson echoed the message adding that if the Taliban wanted to engage with the West then “the first priority for them for us is safe passage for those who want to leave”.

Mr Raab also hinted that Kabul airport could open “in the near future” after talks with leaders in Qatar.

THIS BLOG IS NOW CLOSED.

Former Afghanistan president Hamid Karzai is calling for Taliban and resistance forces in the Panjshir Valley to lay down their weapons and engage in peaceful dialogue.

Mr Karzai led the country from 2001 to 2014 and tweeted saying ” I hope that both sides will resolve the current issue through dialogue so that our afflicted people can enjoy complete peace and happiness.”

Airport one step closer to opening

Officials from Qatar’s foreigh ministry have landed in Kabul this afternoon, seen as one step towards getting the airport back up and running.

Mutlaq bin Majed Al-Qahtani, Special Envoy of the Foreign Minister of Qatar for Counter-terrorism & Mediation in Conflict Resolution said: ” “We have remedied most of the technical and logistic challenges facing the re-opening of the airport.”

The European Union has said the Taliban government must respect human rights, including those of women, and not allow Afghanistan to become a base for terrorism.

Foreign policy chief Josep Borrell said: ” “In order to support the Afghan population, we will have to engage with the new government in Afghanistan.”

He also said the new government must prevent the country from becoming a breeding ground for militants, as it was during the Taliban’s previous time in power.

He said they have also cut telephone lines and medicine supplies.

The European Union has also said it will not recognise the Taliban as the new government.

Foreign affairs chief Josep Borrell said: ” “We have decided to work in a co-ordinated manner… if the security conditions are met.”

Britain will not recognise the Taliban as the new government in Kabul, says Dominc Raab.

Speaking today, Raab said we must deal with the new realities adding: “We do see the importance of being able to engage and having a direct line of communication.”

He also said it would not have been possible to evacuate about 15,000 people from Kabul without cooperation with the Taliban

Speaking at a press conference in Islamabad, Dominic Raab said: “The takeover, I think it’s fair to say, was faster than anyone anticipated, not just the United Kingdom or Nato allies, but I was talking with our friends here.

“And I suspect the Taliban and ordinary Afghans were taken by surprise.

“I think there was a common widespread surprise at the speed with which the consolidation of power happened.”

Dominic Raab has insisted there was “common widespread surprise” as the pace of the Taliban’s takeover of Afghanistan.

He suggested that even the Taliban were ” taken by surprise” by the speed in which Kabul has fell.

The Foreign Secretary is currently in Pakistan to help secure safe passage for vulnerable Afghans left behind.

Committee to set up withdrawal inquiry

The Foreign Affairs Select Committee has announced its intention to launch an inquiry into Dominic Raab’s handing of the crisis.

Mr Raab has faced strict criticism over his decision to stay on holiday as the Afghan government collaped, only returning to the UK after Kabul had fallen to the Taliban.

The women were demanding their right from the Taliban but say they “returned home with gunshot wounds and lashes”.

A tweet from a Taliban official has revealed that a UEA flight is due to arrive in Kabul.

This will be the first international flight to arrive in the country since the Taliban took control on August 31.

Domestic flights in Afghanistan could resume later today, according to Ariana Afghan Airlines.

Senior manager, Tamim Ahmadi told AFP: “We have received a green light from the Taliban and aviation authorities and plan to start flights today,”

Taliban expected to announce administration as soon as this afternoon

The group has faced mounting pressure to announce a new government while it grapples to deflect an armed challenge from rebels in the Panjshir Valley region.

A Taliban spokesperson has said China promised to keep its embassy in Afghanistan open and to increase humanitarian aid to the war-ravaged country.

The Foreign Secretary will meet with his counterpart and other senior leaders after the UK announced £30m in aid to Pakistan to help refugees.

They are expected to discuss how to encourage the Taliban to allow refugees to safely leave Afghanistan.

A Glasgow-based volunteer is facing calls to be deported after pleading his support for the Taliban and helping refugees settle in the Scottish city.

But arriving refugees have called his support for the group “unacceptable” and are calling for the government to deport him.

The U.K. continued to send weapons to the country even after Donald Trump signed a withdrawal agreement in 2020.

The same year £22 million in export licenses was approved — the largest amount since 2008.

“There is a clear risk of high-tech equipment falling into the hands of the Taliban, or worse, ISIS-K and other terror groups,” said Shadow Defence Secretary John Healey.

Mr Mujahid told Italian newspaper La Repubblica “China is our prinicpal  partner and for us represents a fundamental and extraordinary opportunity because it’s ready to invest in and reconstruct our country.

“Beyond that, we have rich copper mines which thanks to the Chinese can be brought back into production and modernised. China represents our passport towards the markets of the whole world.”

China is one of the few countries not to have evacuated staff from its embassy in Kabul in the wake of the Taliban takeover.