Home » World News » Tearful testimony given at inquest into Tauranga worker’s death: ‘If he wasn’t standing there, we wouldn’t all be here today’ 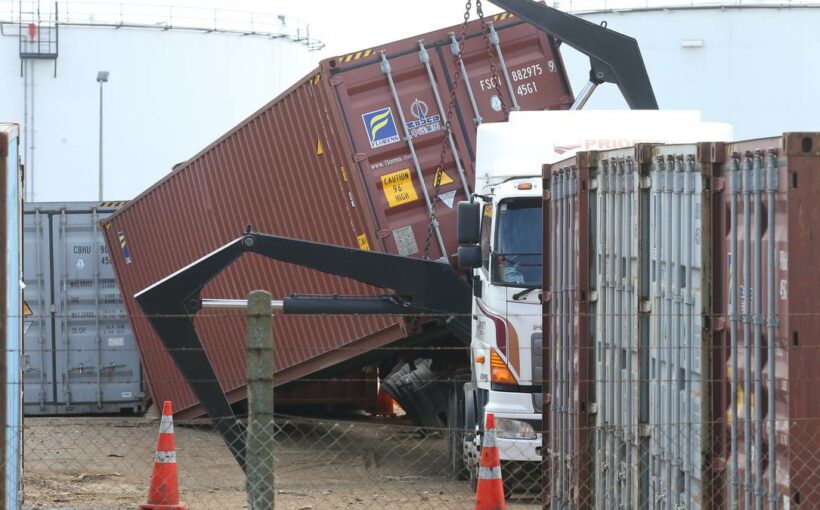 Men who worked alongside a worker fatally crushed in an on-the-job accident have given emotional testimony at an inquest into his death.

Five years on from the incident, a colleague of the man who was first on the scene said he relives the tragedy every day and it has changed how he approached his work.

And another worker told the court he considered the dead man – whose name is suppressed – a competent and experienced worker, but that his errors that day amounted to “gross misconduct”.

In the Tauranga District Court yesterday, Clint Burgess and Ian Pauling gave evidence on the second day of a coroner’s inquest into the March 14, 2016 death of the worker.

He was crushed between the rear of a swing loader trailer and a shipping container at a Totara St site owned by the Port of Tauranga and leased to the man’s employer, Coda Operations Limited Partnership (Coda).

Burgess was branch manager for Priority Logistics which was owned by Coda at the time.

He told the court he had been further down Totara St getting lunch when emergency services called him to tell him about the incident.

“When I first arrived, I was really alarmed at where [the worker] had been standing,” he said.

“I couldn’t think of a legitimate reason for him to be standing in the position he had been. There was no need for him to be standing that close. In addition to that, I read (in a report) that he had one [truck] leg on the container instead of both on the ground. I’ve never heard of an employee doing something like this.”

Burgess said he was “deeply affected” by the incident and kept in contact with the worker’s whānau, calling them on every anniversary of the death.

Burgess left Coda, about three months ago, but said the company had accepted responsibility for what happened. He said Coda went “above and beyond” to do right by the whānau, including offering financial assistance.

After Genevieve Haszard, counsel for the dead man’s whanau, questioned Burgess as to how much time he spent with the worker during his safety induction, Coroner Matthew Bates asked him whether there may have been something he could have done differently.

Burgess fought back tears as he replied: “I reflect on [the worker’s] accident – sorry if I get upset – I reflect on it, I live it, I think you can always have done more. Now I live every day like something like that is going to happen in a workplace. I try to share that with people around me.

“You look at it, I have asked a lot of questions. You just have to try and reflect on it and get better. Teach everyone around you to get better.”

Coroner Bates said: “Hindsight is always 20/20. You are saying you could have done more but at the time you did all you could have.”

Burgess: “Until something like this happens, you think life’s good and you are doing the right thing.”

Pauling, transport compliance manager for Coda, told the court he knew the worker from the trucking industry years before reuniting with him when the worker applied for a job with the company in December 2015.

Pauling carried out the worker’s driving and pre-employment assessment in which he passed with excellence. Pauling later became part of the team leading the internal investigation into the worker’s death, he told the Coroner.

“My assessment of [the worker] was that he was fully competent and I stand by this today.”

However, as Pauling recounted what led to the worker’s death that day, his emotions and tears overflowed. Coroner Bates ordered an adjournment.

When Pauling returned, he explaining he may “struggle” with what he had to say next.

“I was deeply surprised and concerned by what happened. I could see from the investigation that [the worker] set up the legs of the side-loader in a way that was unsafe.”

Pauling said the worker had put one of the side-loader’s legs (also known as arms) on top of an adjacent container rather than the ground. He also positioned himself in a danger zone at the rear of the vehicle.

“I’m sad to say that all of these aspects were clear breaches of our procedures and any one of those procedures would have been considered gross misconduct.”

Pauling said the worker was experienced and entirely capable in his duties.

He still struggled to understand how the worker’s death came to be.

“I believe he was aware he was where he shouldn’t have been. If he wasn’t standing there, we wouldn’t all be here today. None of this may have happened.”

Both Pauling and Burgess are part of a newly established New Zealand Intermodal Transport Group, which focuses on improving health and safety of the industry.

The court heard the group has created safety guidelines specifically for operating side-loaders that are now with WorkSafe and expected to be signed off and distributed nationally.

“We are trying to weed out the young renegades in our industry. This is just the start,” Pauling said.

Branch manager Ricky Clark was not working for Coda at the time of the incident but said in the two years he has now been with the company there has been a “massive, massive shift” towards health and safety as a result of the incident.

“We employ now based on health and safety rather than ability, to a point, because you can train someone that.”

He said health and safety was about 25 per cent of his role and he anticipated that would only increase.

“The incident definitely had a big effect on the guys who are still there. That drove a lot of change,” he said.