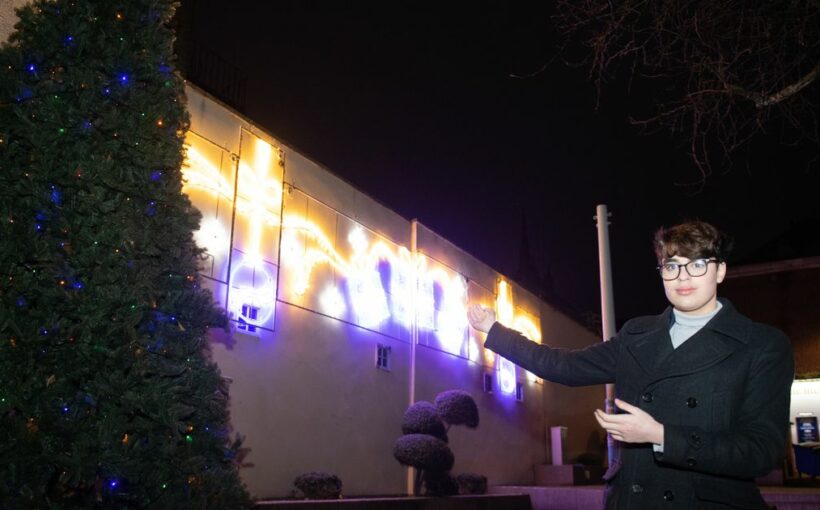 A teenager who decided his town's "horrible" Christmas lights were too dull has spent the last year creating his own display.

Annoyed with the "dark and boring" decorations in Sutton, Saman Zand took it upon himself to bring some festive cheer.

The student said he has always been fascinated with Christmas lights and wanted to do something for his community.

So Saman, who was born and raised in the south London town, began the project at the start of 2021.

And his efforts have paid off, as sparkling Christmas lights now course through Sutton – which have even been credited with reducing crime.

Saman, 17, said: "I've now essentially built the entire display by assembling a team of volunteers from the local community who build or assemble Christmas lights.

"I was born and raised in Sutton, and have lived here all my life.

"It took an incredible amount of fighting to put my lights up, especially as a 17-year-old.

"I just didn't know who to approach or who to talk to about it.

"The first people I approached were so positive about me and my plan, and eventually I got the approval of the mayor of Sutton, who essentially pushed my project and secured some funding from the local committee budget.

"I've had so much support from the local councillors who helped me so much, and I'm so grateful for that help.

"We became a very close-knit team fighting to light up Sutton, and put Christmas lights in new areas.

"When I was a kid, I used to love the Christmas decorations as I thought they were so magical.

"I loved them so much that I even one day tracked down the old lights that used to hang in the town centre and got one of them for myself.

"I've been fascinated by Christmas lights since I was a kid.

"When I was four I remember going to the ceremony where they turn them on and just wanting to get some for myself, I was never interested in whatever celebrity was turning them on or the Santa there.

"I ended up pressuring my dad into buying one when I was ten off the contractors."

Saman hopes to expand the operation to reach more places and add more decor, as the council has invited him to organise next year's lights too.

He said it was his personal experience of the lights in Sutton as a youngster – which he enjoyed – which prompted his decision.

"I thought we had had horrible Christmas lights in the last I've years compared to what we had when I was a kid," he said.

"The town square has traditionally been unlit and is quite a dark, boring area. There used to be a bandstand there but nothing happens there anymore.

"It was such a great potential location, but so underused. We'd had a lot of crime issues there and it seemed like the perfect place to get started.

"Since we put up the lights we've got great feedback from the council and local businesses.

"I went around the local businesses and played dumb asking about the lights, and they all said that people loved them, and that people keep stopping to look at them.

"Illegal activities have also seemed to stop or be less common now it's a lot brighter, so I think it's been a win-win.

"I've kept a low profile about my part in the project, but obviously a few people at school caught onto the fact I was doing it so most people there know about it.

"Most of my classmates aren't too bothered about it, one because they don't really care and two because it's not exactly the most exciting or cool thing to do.

"But some of my friends who say it's cool that I got it all done but I don't think anyone knows about the amount of effort that goes into a project like this.

"My aim was never to get credit though, but to make my local community happier in general. I don't mind that people don't know what I've done – I just care that it's happened."

The project has received "hundreds of pounds" of funding from the council, Saman said.