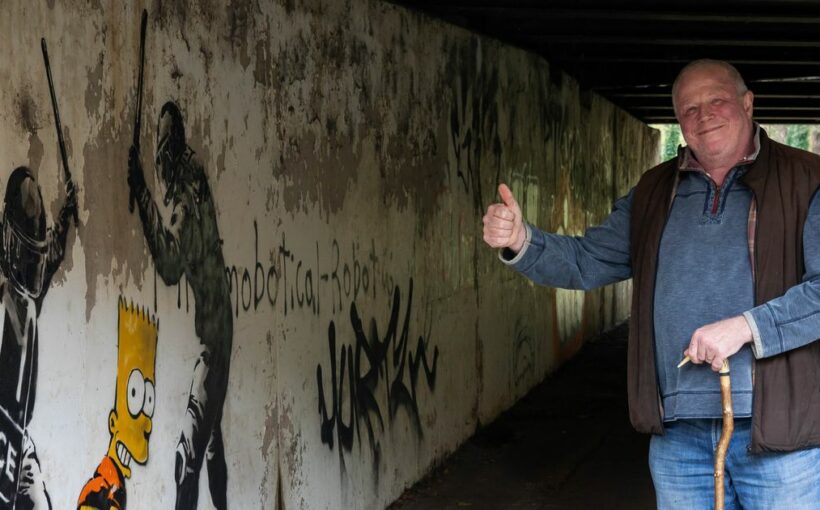 A terminally-ill dad who mooned a speed camera for his bucket list has been honoured with a suspected Banksy painting.

Darrell Meekcom, 55, went viral after police turned up at his house and wrestled him to the ground for dropping his trousers at a mobile speed camera van.

He has now been left stunned when he was contacted by an anonymous person who claimed to represent an ‘international street artist’ on Wednesday morning.

The image shows two police officers with a colourful small Bart Simpson and has appeared on an underpass near the Waterside Pub in Kidderminster, Worcestershire.

Bart Simpson is showing his bum in tribute to Darrell’s bucket list, with the police officers in guard gear with two batons.

Darrell, from Kidderminster, mooned at the mobile speed camera van on Stourbridge Road after making a bucket list having been diagnosed with terminal multiple system atrophy.

The dad-of-two went viral after cops came to arrest him following the incident.

Darrell, who also has Parkinson's Disease and heart and kidney problems, refused to let them in before he was wrestled to the ground outside to put him in cuffs as his wife Sarah all filmed the incident.

"I was simply gobsmacked that I got arrested for mooning a speed camera,” said Darrell.

"It is something I had always wanted to do because I'd been caught by them a couple of times for silly speeds like 35mph in a 30 zone and it always bugged me.

"When I was given the diagnosis last month my wife suggested drawing up a bucket list and that was one of the items on there that I've now crossed off at some price."

Darrell and his family have found amusement from the artwork created by the mysterious artist as the dad praised the ‘tongue and cheek’ mural.

He said he got a mysterious message from an account asking to discuss what happened as a street artist wanted to do a piece on it.

After telling them the whole story, he thought nothing of it until he got a call on Saturday.

Darrell said: “Then to my amazement, I got another anonymous message today (Saturday) to say the piece had been done and I was supplied with a postcode.

“We had some photos taken and sent them across to them. It is amazing.”

Darrell was diagnosed with multiple system atrophy (MSA) last month, which is a terminal condition that affects the nervous system.

He says the life expectancy following a diagnosis of MSA is around six years, although this varies from person to person.

Darrell was released from custody and says he has reported the incident to the Independent Office for Police Conduct.

He said: "They could have killed me very easily and even when I calmly explained the situation, they carried on restraining me and cuffing me from behind.

"They did not even provide care for me when I was in custody despite my various conditions and suffering a blow to the head."

Following the ordeal, Darrell’s vision was blurred and he also suffered two seizures.

He went to Kidderminster Hospital and was later referred to Worcestershire Royal Hospital due to fears he suffered a bleed to the brain.

Darrell is now looking to his next bucket list challenge which includes a bungee jump, parachuting, and running naked at a Premiership rugby match.