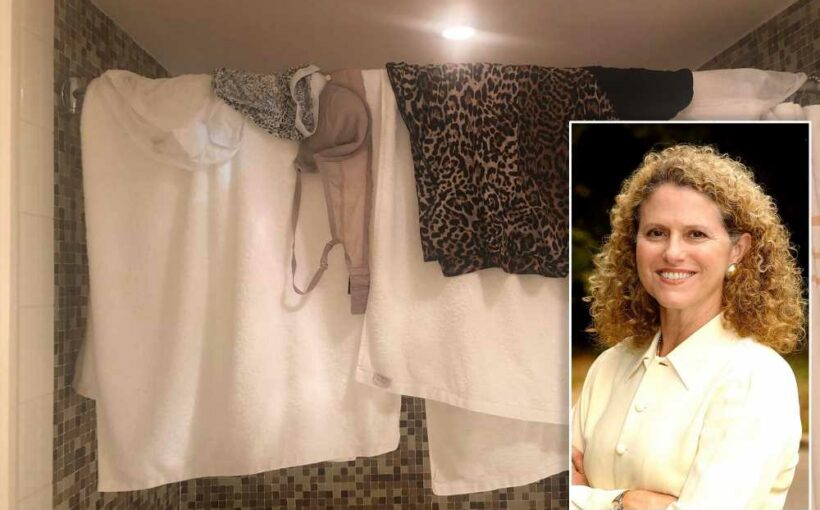 Cop killed, 4 hurt during standoff with barricaded gunman in Texas

Democratic Texas Rep. Donna Howard has been lambasted for trying to portray Democrats’ “sacrifice” during a trip to Washington, DC to stymie a GOP-backed election reform bill — by airing her hand-washed bra and leopard print panties online.

“You bet we’re recognizing & honoring our country’s heritage. As most Texans, tho, this is what we’re doing tonight—using whatever is accessible, uwashing (sic) our clothes in the sink,” the Lone Star state lawmaker said in a tweet.

Howard was among more than 50 members of the Texas House of Representatives who jetted from Austin to DC on chartered flights Monday to block the reform bills for a second time by denying a quorum.

Her post included a photo of her wet clothes – a bra, three pairs of plain undies and a leopard-print shirt and panties — draped over a shower curtain in her hotel room.

Critics suggested that Howard’s public display of her unmentionables was another self-serving attempt by a Democrat to portray the lawmakers’ absence from their state as a personal sacrifice instead of a political strategy move.

“Like most Texans, if I left my job when I was supposed to be there I would get fired. But…..you feel you are ‘special’ and can go on vacation while Texans work and pay you,” @bigjabird said in a tweet in response to her post.

“Get back to Texas and do the job we pay you to do,” he added.

“This is a super strange tweet — but as you know, you wouldn’t have to do this if you were at home in Texas doing your job. Instead of being here to do tourist things and gaslight about election bills not actually accomplishing anything,” Republican strategist Matt Whitlock wrote.

“We are in awe of your sacrifice. I cannot even fathom how you are staying strong through these difficult times. A true hero,” @marlonrice said in a tweet.

Another user asked if there are no laundromats in the nation’s capital.

“So bizarre. See this one time my washing machine broke so I took my clothes to this big store with lots of washers and dryers and I put quarters and soap in and solved the problem,” @ImChrisHughes wrote.

User @Ray46405836 said Howard “will forever be remembered in the pages of history as you continue waging this war.

“This level of achievement is on par with the the (sic) storming of Normandy, landing on the moon, and finding a laundromat. Thank God you remembered to pack an ID so you can check in at the hotel,” he added.

And @SamGalia wrote: “If you wanted to show off your underpants, you could have had someone ‘leak’ them to the press like a normal person.”

Meanwhile, user Dyana Limon-Mercado gave Howard a break, saying: “Omg the men on here who are so offended to find out that women may wash their bras in a sink whether or not they are breaking quorum.”

Members of the part-time Texas State Legislature are paid an annual salary of $7,200, Fox News reported, so the vast majority of the delegates have other jobs – but state representatives collect a $221 per diem for days that the legislature is in session.

A spokesperson for Texas Gov. Greg Abbott told Fox News that the Democrats who flew to DC were still receiving the daily stipend.

Howard’s office did not immediately respond to an email from the network seeking comment.