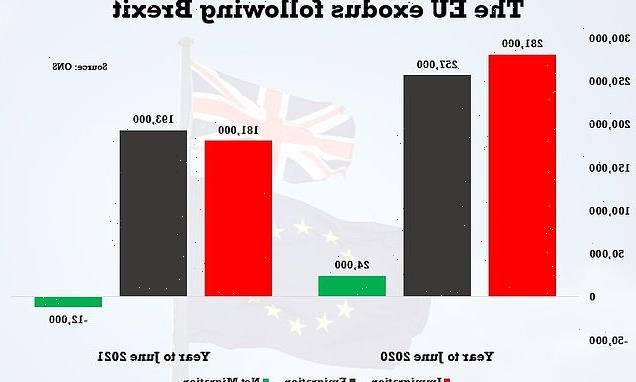 The great EU Brexodus: Number of Europeans living in the UK FELL by 12,000 as migration to Britain tumbled by more than 20,000 after it quit the bloc and Covid struck

Departing EU nationals drove a decrease in net migration into Britain last year as the country was gripped by the fallout from Brexit and the Covid pandemic, new figures revealed today.

Preliminary data from the Office for National Statistics (ONS) showed that 12,000 more citizens of the bloc left the UK last year than arrived in the year to June 2021.

That was against a net increase of 24,000 in the previous year, which included six months of movement before Brexit took place and nine before Covid travel restrictions came into effect in March 2020.

However, the ONS cautioned that Covid meant it had to change its methods of obtaining data.

Jay Lindop, director of its Centre for International Migration, said: ‘The 12 months to June 2021 was a period when migration behaviour was impacted by the restrictions imposed to manage the coronavirus pandemic as well as ongoing changes in migration policy following Brexit. 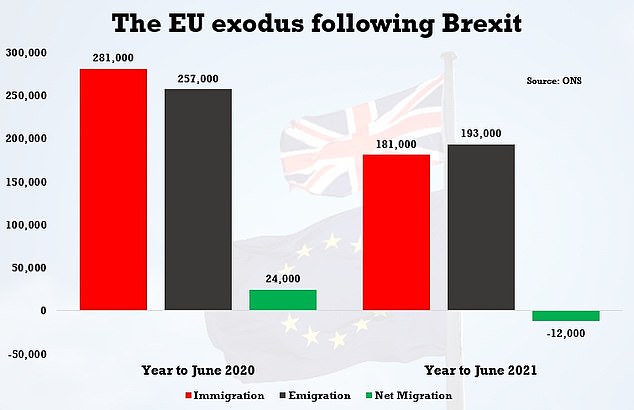 Preliminary data from the Office for National Statistics (ONS) showed that 12,000 more citizens of the bloc left the UK last year than arrived in the year to June 2021. 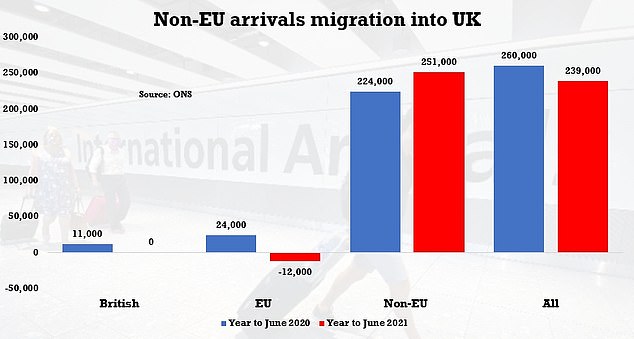 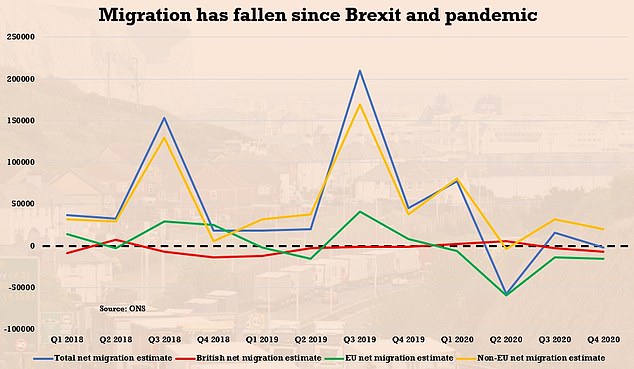 Previous data, collected differently, has also shown a fall in EU migration in the second quarter of 2019 and 2020. But prior to that the last time it was a negative figure was 1991, when the EU was much smaller.

‘Bringing together the best sources of data we have available, our latest estimates of net migration suggest that around 239,000 more people came to the UK than left, driven by non-EU immigration.

‘Due to the data collection challenges posed by the pandemic, we’ve used new, experimental, methods to produce today’s numbers and these will be finessed over the coming months as more data becomes available, including census numbers.

‘While the figures give a snapshot of migration during the pandemic, they should not be compared with historic trends and are subject to change.’

Previous data, collected differently, has also shown a fall in EU migration in the second quarter of 2019 and 2020. But prior to that the last time it was a negative figure was 1991, when the EU was much smaller.

Before Brexit, the strong demand in Britain’s labour market – where wages rose by an annual 7 per centin the first quarter – would encourage more people into work and bring in EU workers where needed.

But over the past two years the number of EU nationals working in Britain has fallen by 211,000 while the number of non-EU nationals rose by 182,000. And hiring from abroad has become tougher as almost all foreign workers now require a visa and filling vacancies quickly with those with the right skills became more challenging.

Michael Saunders, a BoE policymaker, said Brexit could be ‘limiting the extent to which domestic capacity strains and specific skill shortages can be eased through imports and inward migration’.

It was also revealed today that the number of asylum claims made in the UK has climbed to its highest in nearly two decades, while the backlog of cases waiting to be determined continues to soar.

The number of applications from lone migrant children is also at its highest level for any 12-month period since records began in 2006. Some 4,081 applications from unaccompanied asylum-seeking children (UASC) were made in the year to March 2022.

The increase in applications was ‘likely linked in part to the easing of global travel restrictions that were in place due to the Covid-19 pandemic, and to a sharp increase in small boat arrivals to the UK’, the Home Office report said.

At the end of March 2022, there were 109,735 people awaiting an initial decision on their case, 66 per cent higher than the previous year when 66,185 people were waiting.

This is more than double the number in March 2020 when the coronavirus pandemic began (51,906) and is a new all-time high since current records began in June 2010.

The figures come as the Home Office announced it was setting up an action group to look at how to speed up the processing of asylum claims in a bid to increase the number of decisions made on cases on a weekly basis.

Three-quarters (75 per cent) of all initial decisions in the year ending March 2022 were grants, which is ‘substantially higher than previous years’, and the highest rate in more than 30 years, since 82 per cent in 1990, according to the Home Office.

Meanwhile, 2,761 people were deported from the UK in 2021 – 62 per cent fewer than in 2019 before the pandemic. The vast majority of enforced returns were for foreign criminals, most of which were EU nationals.

A Home Office spokeswoman said the department had ‘helped thousands of people through our generous safe and legal routes including those fleeing Putin’s war in Ukraine, refugees from Afghanistan and our BN(O) Hong Kong route.

‘And as we bring the Nationality and Borders Act into practice, we are working urgently to speed up processing of claims, including via a new asylum action group.’