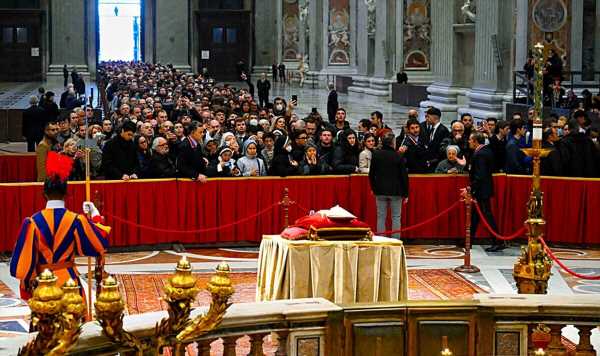 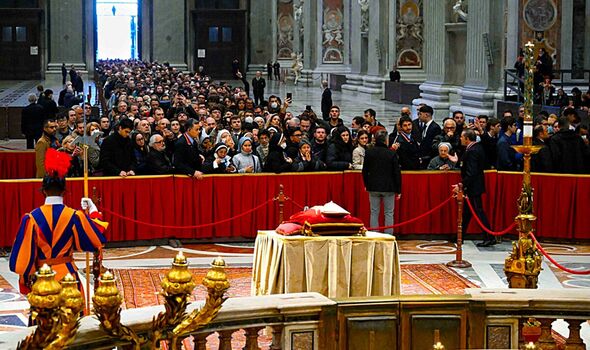 The German cleric became the first Pope to resign in 600 years in 2013, citing ailing health. By mid-afternoon, Vatican police estimated that about 40,000 people had viewed his body.

Among those to pay their respects were Italian premier Giorgia Meloni plus the country’s president Sergio Mattarella and his daughter Laura.

Mourner Filippo Tuccio, 35, arrived from Venice on an overnight train to join the throng. He explained: “I wanted to pay homage to Benedict because he had a key role in my life and my education.

“When I was young I participated in World Youth Days,” he added, referring to the jamborees of young faithful held periodically and attended by pontiffs.

Sr Tuccio said he had studied theology and “his pontificate accompanied me during my university years”.

Twelve hours of viewing are scheduled for today and tomorrow before Thursday morning’s funeral, which will be led by Pope Francis at St Peter’s Square.

Public viewing lasts for 10 hours on Monday in St Peter’s Basilica. Twelve hours of viewing are scheduled for Tuesday and Wednesday.

Workers on Monday were setting up an altar in the square for the funeral Mass. Also being arranged were rows of chairs for the faithful who want to attend the funeral. Authorities said they expected about 60,000 to come for the Mass.

In keeping with his wishes, Benedict’s tomb will be in the crypt of the grotto under the basilica that was last used by Pope St John Paul II, before the saint’s body was moved upstairs into the main basilica ahead of his 2011 beatification, Vatican spokesman Matteo Bruni said.

Marina Ferrante, 62, from Rome, arrived an hour before the doors were opened, and grew emotional when she explained why she came.

“I think his main legacy was teaching us how to be free,” she said. “He had a special intelligence in saying what was essential in his faith and that was contagious.

“The thing I thought when he died was that I would like to be as free as he was.

“I believe there’s a continuity between him and Pope Francis and whoever understands the real relationship between them and Christ can see that.”