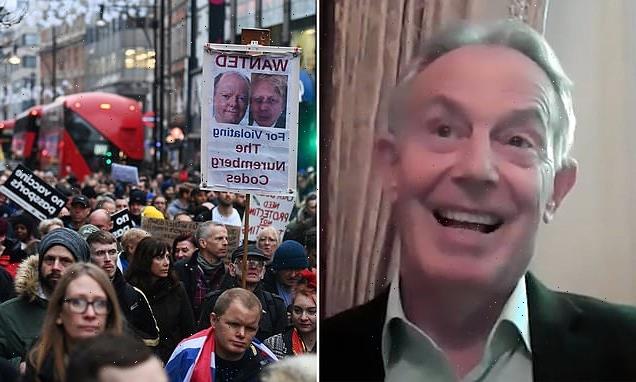 Tony Blair labels anti-vaxxers ‘IDIOTS’: Ex-PM accuses people refusing jab of being beyond ‘irresponsible’ and says ‘blunt instrument’ of lockdown will not work again because ‘public has been through too much’

Tony Blair has slammed vaccine refuseniks as ‘irresponsible idiots’ as he called for the country to ‘go after them and persuade them’ to get it.

The former Prime Minister highlighted the rapid spread of the Omicron variant as a cause for concern, saying Britons who decline the jab were ‘going to get it (Covid)’, which would strain the NHS.

But he said that the ‘public has just been through too much’, adding that the ‘blunt instrument of a lockdown’ would not work as the government might want.

Mr Blair, whose New Labour premiership lasted from 1997-2007, told Times Radio that ‘persuading’ people to get the vaccine was ‘in their own interest, never mind the public interest’.

He said: ‘Frankly, if you’re not vaccinated at the moment and you’re eligible, and you’ve got no health reasons for not being unvaccinated, you’re not just irresponsible. You’re an idiot. 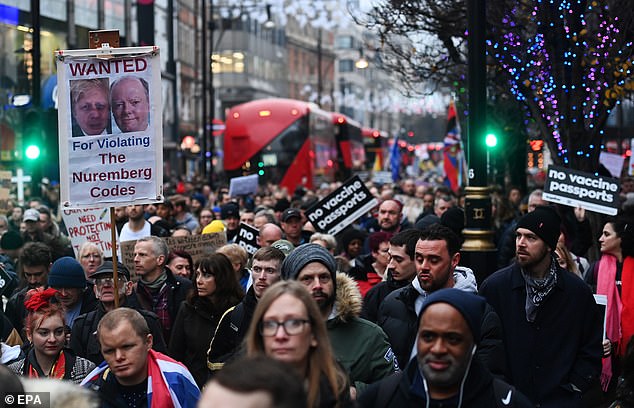 The former Prime Minister highlighted the rapid spread of the Omicron variant as a cause for concern, saying Britons who decline the jab were ‘going to get it (Covid)’, which would strain the NHS (pictured: Demonstrators march to protest Covid lockdowns in London on Saturday)

‘I’m sorry, truthfully, you are. This Omicron variant is so contagious, if you’re unvaccinated and you’re in circulation, you’re going to get it.

‘And that’s what’s going to put a lot of strain on the health service. Almost half the people in the ICU are unvaccinated, it’s really important.

‘We shouldn’t target these people who are unvaccinated in a heavy-handed way but we should try to go after them and persuade them.’

Figures from NHS England show that 1,904 people were in hospital in London with Covid-19 as of December 21, the highest number since March 2 and is up 41% from a week earlier.

But Mr Blair said that he would not have brought in restrictions this Christmas because of the ‘pain’ of a full lockdown, while also suggesting that the current Government’s strategy is a ‘gamble’, after Boris Johnson confirmed no new rules be brought in before Christmas.

Mr Johnson’s Government has now announced the self-isolation period for fully vaccinated people who have coronavirus has been cut to a week, which will give more people the chance to spend time with loved ones over Christmas.

From Wednesday, those in England who receive negative lateral flow results on day six and day seven of their self-isolation period, and are vaccinated, will no longer have to self-isolate for the full 10 days.

Across England, 6,902 patients were in hospital with Covid-19 on December 21 – the highest number since November 10 and up 7% week-on-week.

In Wales, more Covid restrictions are expected to be announced on Wednesday as the Welsh Government meets to discuss hospitality measures.

The Northern Ireland executive will also decide on the same day what ‘level of asks’ will be made of the public to curb the latest surge in Covid-19.

Scotland’s traditional Hogmanay celebrations will be cancelled and live sports will be ‘effectively spectator-free’ for three weeks from Boxing Day as part of new Covid-19 restrictions, Nicola Sturgeon said on Tuesday.

The First Minister also introduced new curbs on hospitality and urged people to ‘stay at home as much as possible’ until at least the first week of January.