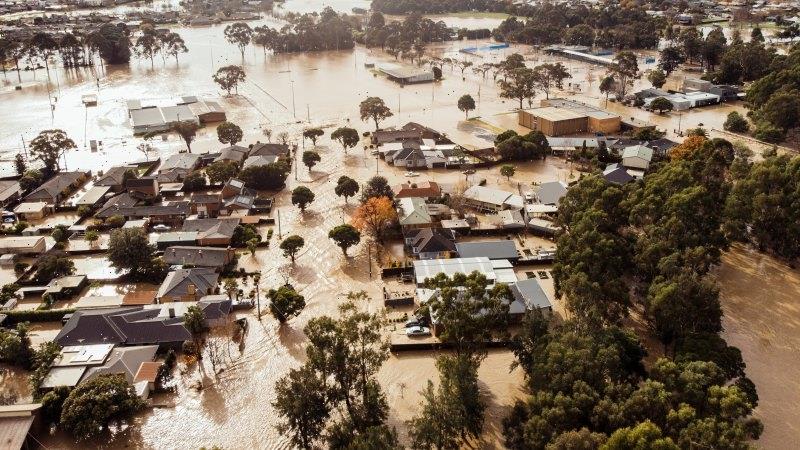 A Latrobe Valley town that was flooded on Thursday is being told to evacuate again due to fears the nearby creek could swell by two metres, as 68,000 Victorian homes enter the weekend still without power.

But weather authorities had cancelled severe warnings for parts of Gippsland on Saturday, which had forced the closure of the Yallourn coal mine on Friday night. 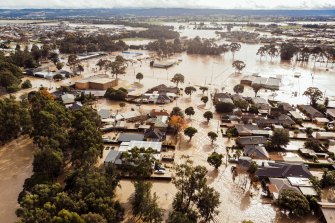 An aerial view of flooding in the township of Traralgon in Gippsland. Credit:Blake Bourne

An evacuation alert for Traralgon was still in place on Saturday morning, with concerns the Traralgon Creek could repeat the flooding of Thursday.

The creek was steady at 2.87 metres deep at 6.50am this morning, but there is potential it could reach major flooding levels of 4.8 metres before lunchtime.

VicEmergency warned nearby residents that rainfall of up to 45mm had fallen in the Traralgon catchment since 6pm on Friday, with an additional 15mm of rain expected on Saturday.

“Major flooding is possible from Saturday morning, may be similar to Thursday’s flood event,” the VicEmergency website reported.

“Some uncertainty exists in the Bureau of Meteorology (BOM) models. However, as the risk is high it is recommended that you leave the area now.

“If you choose to stay, emergency services may not be able to help you.”

Moderate flood warnings were current on early Saturday morning for the Thomson River upstream from Cowwarr Weir to Wandocka and downsteam from Wondocka to Sale, the Latrobe River from Yallourn to Traralgon Creek, the Werribee River upstream and downstream of the Melton Reservoir, and the Yarra River to Coldstream.

A spokeswoman for the State Control Centre confirmed there were still 68,000 homes across the state without power. 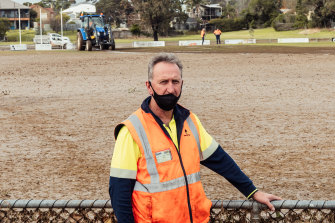 BOM duty forecaster Michael Efron warned Melburnians to “take care” around the Yarra River on the weekend, with recent heavy rains driven by a low pressure system sitting over eastern Victoria taking on moisture from the Tasman Sea.

He said there would potentially be another low pressure system moving across the state on Wednesday and Thursday, but it would not be as severe as what the state has experienced this week.

“If the front is slow-moving – like what we saw over the last couple of days – they have the potential to deliver that really heavy rainfall and unfortunately it’s led to that major flooding across parts of south Gippsland,” he told 3AW.

“(Next week’s front) is definitely one we’ll be keeping an eye on, given the ground is very wet across those central and Gippsland districts.

“There are still lots of flood warnings out at the moment … anyone in the Melbourne area, do take care around [the] Yarra area, especially in the upper reaches there with those floodwaters waters just moving very slowly down towards the bay.”

Melbourne is expected to high a top of 16 degrees on Saturday but will remain mostly cloudy, with showers predicted in the outer eastern suburbs.