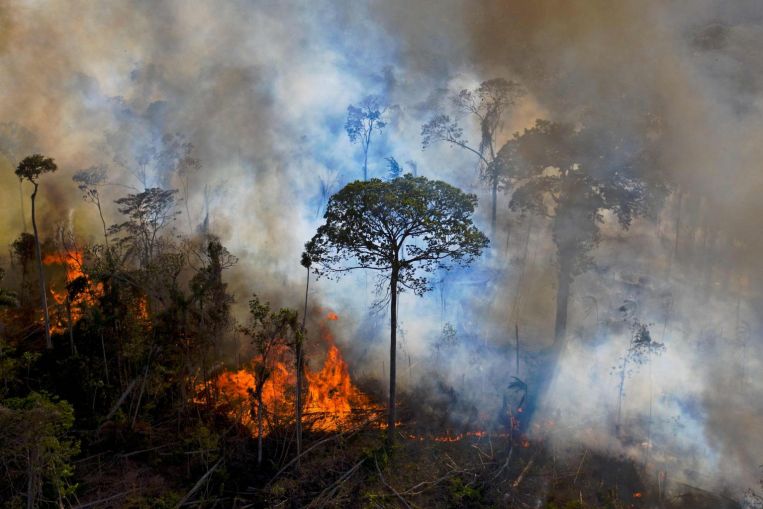 SINGAPORE – The world lost an area of tropical rainforest the size of the Netherlands in 2020, a global analysis showed on Wednesday (March 31), accelerating a trend of forest loss driven largely by agriculture, fires and climate change.

The findings show nations and companies are far off course from achieving pledges to rapidly reduce the loss of forests, which are critical ecosystems for nature and economies.

A total of 4.2 million ha of primary rainforests were destroyed, up 12 per cent from 2019, causing a major spike in greenhouse gas emissions, loss of biodiversity and loss to indigenous communities heavily reliant on forests for livelihoods, according to the assessment by the University of Maryland, released on theGlobal Forest Watch online platform of the World Resources Institute (WRI).

Rainforest loss spiked in South America, central Africa and parts of South-east Asia, including Cambodia and Myanmar. Bucking the trend, rainforest loss fell for a fourth year in Indonesia and Malaysia.

“Every year we ring the alarm bell but we’re still losing forests at a rapid clip,” WRI senior fellow Frances Seymour told an online briefing ahead of the release of the analysis, which is published annually.

Mr Rod Taylor, global director of WRI’s forest programme, said the loss of 4.2 million ha of carbon-rich rainforests caused the release of 2.64 billion tonnes of carbon dioxide-equivalent, or about the annual emissions of 570 million cars or about twice the annual greenhouse gas emissions of Japan.

“These dense forests can be hundreds of years old and store significant amounts of carbon. Losing them has irreversible impacts on biodiversity and climate change,” he told the briefing.

He said there was no clear sign the pandemic was the cause of increased forest loss, despite fears over fewer patrols and reduced environmental agency budgets or that the return to the countryside of millions of people might fuel deforestation.

The bigger impact could come with the pandemic recovery phase, he said.

“We’ll be closely monitoring post-pandemic activity as we know that recovery policies will play a very significant role in how forests fare in the future.”

A major concern was the impact of climate change on forests, the analysis noted, with high temperatures, drought and intense fires destroying large areas of rainforests and tropical wetlands, as well as forests outside the tropics, in Siberia and southern Australia.

“The most ominous signal from the 2020 data is the number and variety of instances where forests themselves have fallen victim to climate change. Wetlands are burning,” said Ms Seymour.

In Australia, the 2019-20 fires resulted in a nine-fold increase in tree cover loss last year compared with 2018, totalling nearly 2.5 million ha, according to the analysis. Fires also tore through Siberian forests, the Amazon and Brazil’s Pantanal, the world’s largest tropical wetland.

“Climate change and forest degradation combine to make the forests that remain warmer, drier and more vulnerable to fire and pest infestations, which in turn releases more carbon when those forests burn and decay. So we’re getting into a vicious cycle,” said Ms Seymour.

That’s a major worry because forests, which soak up large amounts of CO2 annually, are regarded as a key way to limit the pace of global warming. If they are increasingly vulnerable to fire, drought and pests, that bodes ill for global efforts to fight climate change.

According to the analysis, primary rainforest loss was highest in Brazil, jumping 25 per cent to 1.7 million ha in 2020 in part due to severe fires and agriculture. The Democratic Republic of Congo was number two, followed by Bolivia and then Indonesia, with Laos number eight and Malaysia ninth globally.

He said that after the devastating 2015 fires, the Ministry of Environment and Forestry stepped up fire monitoring and prevention efforts, and the national government issued a temporary moratorium on new oil palm plantation licences and a permanent ban on primary forest and peatland conversions.

Other reforms, such as social forestry initiatives, also eased pressures on forests by alleviating poverty and encouraging sustainable land use management, he added.

Ms Seymour said the pandemic could have a sting in the tail for tropical forests.

“Think how astonishing it is that in a year the global economy contracted 3 or 4 per cent, primary tropical forest loss increased by 12 per cent,” she said.

“And there’s every reason to believe that we haven’t yet seen the most significant impacts of the pandemic on forests which will probably come into play as economies start to recover. And unless we offer alternatives, it’s likely that governments will try to restart their economies on the backs of forests.”