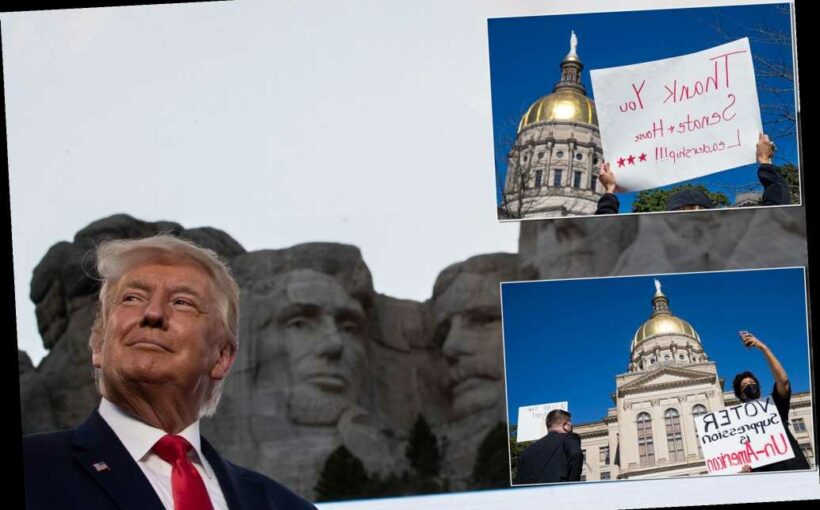 Former President Trump is applauding a Republican-led election reform bill in Georgia, a state he narrowly lost in November in a defeat he falsely chalked up to voter fraud.

“Congratulations to Georgia and the Georgia State Legislature on changing their voter Rules and Regulations,” Trump said in a statement through his PAC Save America.

“They learned from the travesty of the 2020 Presidential Election, which can never be allowed to happen again. Too bad these changes could not have been done sooner!”

The election overhaul bill was signed into law Thursday. It limits the window in which absentee ballots can be requested, and cuts the number of locations and times ballot drop boxes can be accessed.

The measure also allows state lawmakers to appoint the chair of the election board and remove and replace county election officials, in a rebuke of the power of elected officials.

Georgia Secretary of State Brad Raffensperger, a Republican who was in charge of the election process under the old rules, refused Trump’s post-election demands to “find 11,780 votes,” to swing the contest for him and the GOP.

President Biden called the legislation “Jim Crow in the 21st century” on Friday, saying it harkens back to the last century’s racially discriminatory laws.

“Among the outrageous parts of this new state law, it ends voting hours early so working people can’t cast their vote after their shift is over,” Biden said.

“It adds rigid restrictions on casting absentee ballots that will effectively deny the right to vote to countless voters. And it makes it a crime to provide water to voters while they wait in line — lines Republican officials themselves have created by reducing the number of polling sites across the state, disproportionately in Black neighborhoods.”