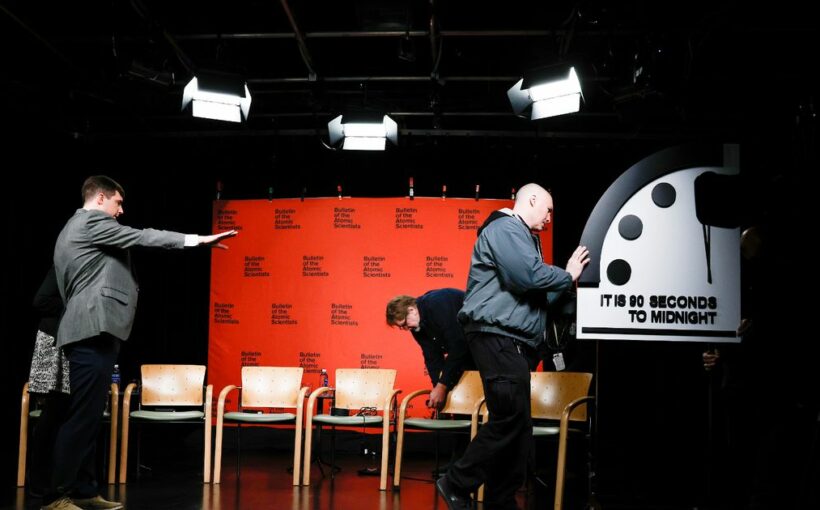 The UK is facing bigger threats than nuclear war as the Doomsday Clock moved to a terrifying 90 seconds to midnight, an expert has claimed.

Professor Anthony Glees was responding to news that the infamous Doomsday Clock had ticked closer to midnight – or the apocalypse – than ever before.

The Clock, created by the Bulletin of the Atomic Scientists, takes in to account a number of factors and predicts how close humanity is to manmade destruction.

The latest time reading, the first since 2020, put us at a terrifying 90 seconds to midnight – the most in jeopardy we have ever been.

While multiple factors are taken into account, it is understood that the biggest reason the clock has ticked closer to catastrophe than ever before is because of Vladimir Putin’s ongoing invasion of Ukraine.

But Glees, a European affairs and Security and Intelligence academic at the University of Buckingham, was unphased by the news when he spoke to the Daily Star.

“To be brutally frank, I don't think the biggest threat we face is nuclear extinction," he said.

“To my mind, the Doomsday Clock is a kind of CND (Campaign for Nuclear Disarmament) device which is intended to terrify us, in the West, and encourage us to believe we can no longer defend ourselves, so assisting those in the East, – Russia, China and North Korea, to get their wicked way with us.”

He explained how, in his mind, it would be more dangerous to give up nuclear weapons, contrary to nuclear disarmament campaigns of the past and present.

Instead, he claimed that: “The biggest threat we face is that we in Europe kowtow to Putin and his mad KGB-style nuclear threats and surrender our security and the security of Europe to Russian thugs without a fight.

“We need to defeat him with conventional weapons, on the battlefield, to drive him out of Ukraine. History will then do the rest.”

He added: “We will prevail if we are strong and certain. We won't if we get demoralised by Doomsday talk.

“In my profession we say (quoting Mark Twain) 'never make predictions, especially not about the future'.”

For the latest breaking news and stories from across the globe from the Daily Star, sign up for our newsletter by clicking here .