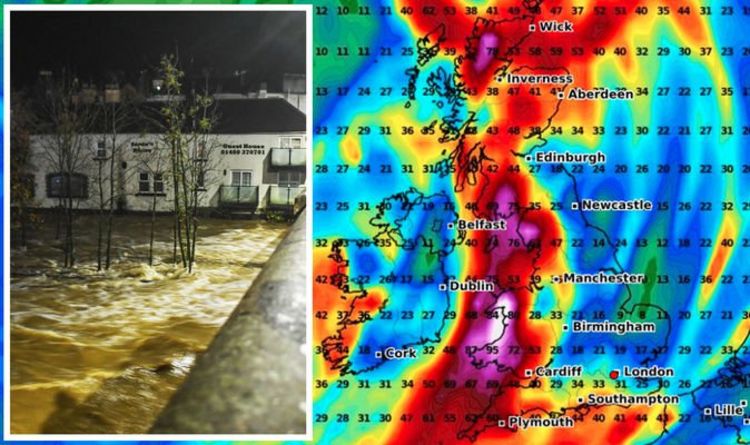 BBC Weather issues warning for floods across parts of Europe

Overnight, an evacuation operation was launched in Hawick, Scotland, due to the torrential rain. The rising water levels caused the Teviot river to burst its banks – and police declared a “major incident”. Residents were warned to prepare to flee at short notice amid fears that up to 500 properties could be under threat.

It tweeted: “Two road bridges have been washed away on the river Annan, north of the railway.

“We’re unable to allow trains to pass over the Annan Viaduct pending a daylight safety inspection.”

The warnings stretch from Manchester all the way through Cumbria and up to Glasgow and Edinburgh.

The warning has also been placed on the whole of Wales, with the Met Office warning the weather may “lead to some disruption due to flooding”.

The South West of England, including Plymouth and Exeter have also been issued the warning, which is expected to last from 3am to 3pm today.

On the Government website, 47 flood alerts have been issued for the entire country including Mid Devon Rivers and Exmoor Rivers.

Lake Windermere, River Lyd, and River lew are just three of the 23 flood warnings issued by the Government as the rain continues to fall.

Anyone expecting a drier weekend will be disappointed as the wet weather is expected to last until mid-November.

According to latest WX Charts, up to 116mm of rain is expected to fall on October 31.

With it rising to 131mm by November 2, the latest forecast predicted.

SEE BELOW FOR LIVE UPDATES…

Schools closed in Dumfries and Galloway due to water levels

Several schools across Dumfries and Galloway were forced to closed after flooding blocked the roads.

On Thursday night, there were 19 flood warnings in place across Scotland.

14 of which were in the Scottish Borders.