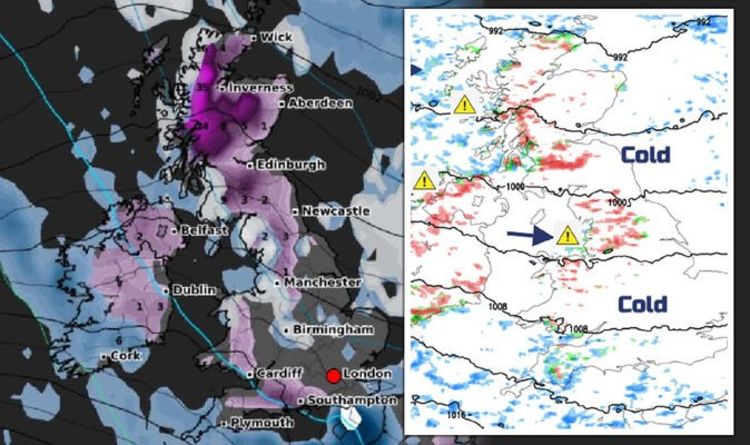 Latest WX Charts have forecast the Scottish Highlands will see heavy snowfall by 6pm on January 6. The snowy weather will continue down to the north of England, where up to 5cm of snow is predicted to fall. By midday on January 7, up to 10cm of snow will fall in the north of England – including Newcastle, Manchester and Cumbria – while the south east will remain free of snow.

Northern Ireland will also see around 2cm of snow falling across the country, with Wales expecting to see a brief spell of snow.

Netweather predicted: “There will be the risk of ice and also fresh show over 200m with 2 to 5cm, even 10cm over the highest ground.

“Some areas will miss out others see a feed of showers.

“Gradually through Friday, the showers ease but it remains cold in the north and east.

“The weather will be changeable through the weekend with spells of frontal rain, hill snow and blustery winds passing by.

“Leading to milder interludes but then colder times and still a risk of a frost in the north.”

The wintry weather is expected to bring Baltic temperatures with it, with the Scottish Highlands predicted to drop to -7C by midday tomorrow (January 7).

The likes of Edinburgh, Newcastle and Manchester will see temperatures plummet to around -1C.

The rest of the country will remain around 0C as the freezing temperatures arrive.

These include lightning strikes from thunderstorms as well as up to 10cm on snow falling from today.

They predicted there would be up to two hours of snow in many areas across the country.

They warned the “frequent sleet, hail and snow showers” from 8pm on January 6 to 11am on January 7 could lead to some travel disruption and brief power outages.

Met Office spokesperson Grahame Madge said: “At the moment we’ve got a ridge of high pressure leading to clear skies.

“Into the early hours of tomorrow morning we’ll start to see a weather front approach from the west, bearing in mind conditions will have been intensely cold overnight with frost and freezing fog in southern parts of England.

“We’ll get this frontal band of precipitation working east, then as that cold air bumps into the weather front moving in we’ll see a line of snow along that front.”

He added “thundersnow” would be caused by the contrasting cold front arriving from the west and the warmer grounds due to unseasonable temperatures.

Thundersnow, also known as a winter thunderstorm, is an unusual kind of thunderstorm with snow falling as the primary precipitation instead of rain.

It typically falls in regions of strong upward motion within the cold sector of an extratropical cyclone.

Bookies have predicted the UK could be set for a record-breaking cold year ahead.

Alex Apati of Ladbrokes said: “We’ve already seen the coldest night of winter this week, and the odds suggest we’re set for even worse temperatures over the next few months, with record-breaking snow also set to fall.”