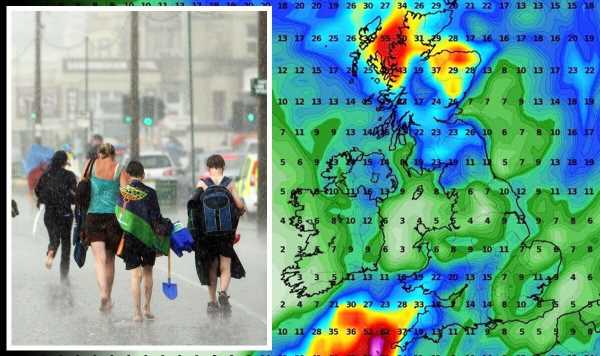 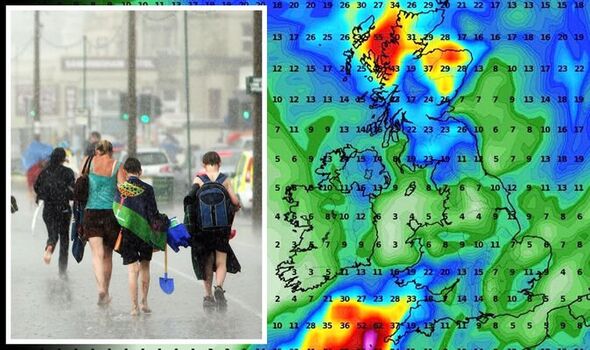 A growing risk of rain and thunder over the four-day holiday has forced experts to make a gloomy U-turn on earlier sunny predictions.

Britons are warned to have brollies and raincoats at the ready for torrential downpours, thunder and plunging temperatures.

Weather systems lined up in the Atlantic are more typical of autumn and winter than the start of summer, experts say.

One area of low pressure, spinning with the jet stream to the southwest of Britain, threatens to derail hopes for a royal scorcher.

Met Office Meteorologist Aidan McGivern said: “For the start of next week it looks likely low pressure will be to the east pushing showers in from the east.

“Later, there will be a low pressure to the southwest with its own jet stream circulation around it, so it’s like a loose cannon and will meander around randomly making its behaviour difficult to predict.

“Weather outcomes show generally light winds and temperatures recovering, but there is a lot of uncertainty next week about the details of the rainfall.”

How these systems behave over the coming days will decide whether Britons might still catch a royal roasting or end up with a less than majestic soaking.

Forecasters, though still uncertain, are veering towards the latter while warning heavy downpours could become widespread.

“When we have this kind of set up you can see low pressure systems lined up to come in which is typical for the autumn and winter.”

Weather models have disagreed over the past week with experts changing their predictions day to day, and even hour to hour.

While forecasts for a Jubilee scorcher have largely fizzled, sunshine could break through during the second half of the holiday.

Jim Dale, meteorologist for British Weather Services, said: “Unfortunately it is not going to be the scorcher which looked like it would be a possibility a few days ago.

“We are now looking at showers and cloud, and some of these showers could be heavy and thundery during the first half of the holiday.

“It looks like Saturday and Sunday will be better, and we could see drier conditions and higher temperatures.

“But overall, the Jubilee weekend is not looking great. We are not expecting Armageddon, but nor are we expecting a heatwave.”

However, everything could still change depending on how Atlantic weather patterns affect the UK, he said.

He added: “The changing forecasts have messed up predictions for the Jubilee weekend, and it could all change yet.

“It is a case of watching this space through the coming days to get a firmer picture.”

The threat of rain has prompted bookies to slash the odds on the wettest day of the year with Ladbrokes offering 6-4 on a Jubilee washout.

Spokesman Alex Apati said: “We could be set for a Bank Holiday washout if the latest odds are anything to go by, with records set to be broken for all the wrong reasons next week.”

Ladbrokes has also slashed the odds on the wettest June, while Coral is offering 1-2 for Jubilee rain.

Spokesman Harry Aitkenhead said: “The British public will need their umbrellas over the long Jubilee weekend.

“We go odds on for rain to fall on the Thursday in London, whilst it is an outside 3-1 shot on rain falling on each of the days.”