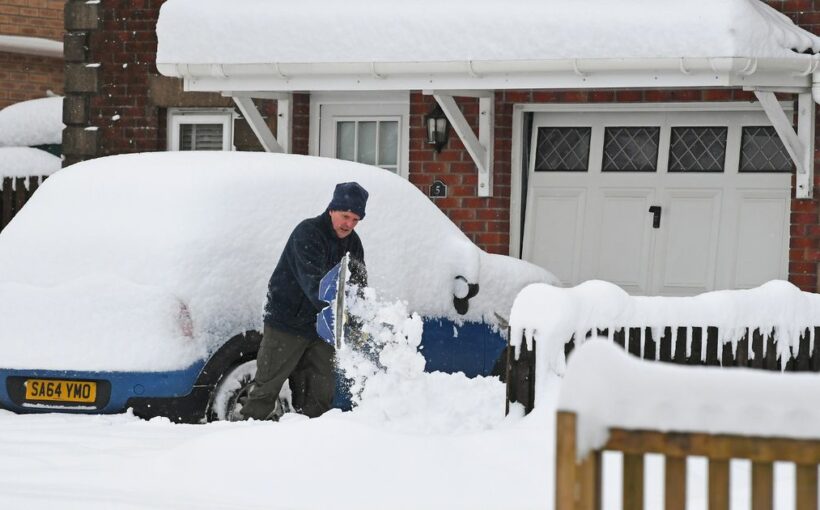 Heavy snowfall has hit the UK this week – and forecasters don't think Britain has seen the last of it, according to long range weather maps.

The Met Office has been forced to issue a number of weather warnings this week (including one rare amber warning) due to the chaos caused by the Arctic conditions.

Up to eight inches of the white stuff was recorded in parts with temperatures dipping as low as -9C.

However, there appears to be more to come.

Earlier this week we reported that forecasters were concerned about another cold snap coming in February, blasted at the UK by a weather system from Greenland.

Looking ahead to the start of next month, they show that a blizzard will make landfall in Northern Ireland and northern parts of Scotland on the evening of Thursday, February 2.

Overnight and into Friday morning (February 3) the snow will drift southwards, covering much of the rest of Scotland and large swathes of northern England.

Although those dates are too far out for WX Charts to provide estimates as to how much snow will settle on the ground, lighter purple inside darker purple shows snow falling at a rate of at least 5cm (roughly two inches) per hour.

Parts of England, Northern Ireland and Scotland all appear set to be blasted by such flurries at the start of next month.

This appears to align with what Netweather's Nick Finnis said about the weather system coming from Greenland.

He wrote that "high latitude blocking towards Greenland" (a ridge of high pressure blocking the typical circulation of wind) could bring a "-NAO" our way.

NAO refers to North Atlantic Oscillation, a weather phenomenon that brings cold air to Europe when in its negative phase.

If it does come, "wintry precipitation" will first hit up north, although Finnis added: "Colder conditions may spread south with a wintry risk to all parts briefly on the back of low pressure systems moving east and high pressure building to the west."

Jim Dale from British Weather Services has warned that a "Polar Vortex" could plunge us back into sub-zero temperatures next month.

The meteorologist told the Express: "Only stratospheric warming over the North Pole will keep us and other northern hemisphere countries in the wintry frame through February.

"It’s begun but it needs to continue, for the Polar Vortex to split and then we see where it goes."